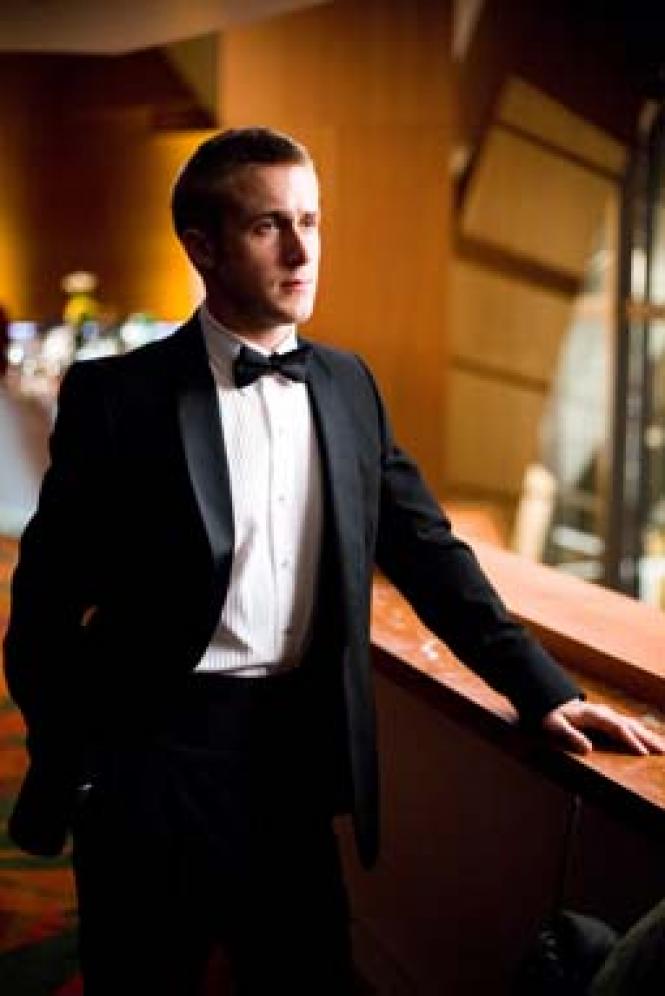 In Gregory Hoblit's smart new thriller Fracture, cocky assistant DA Willie Beachum (Ryan Gosling) has one case standing between him and a big pile of candy. Just as he's being fitted for his first tuxedo, Willie is summoned to court to formally charge aircraft engineer Ted Crawford (Anthony Hopkins) with attempting to kill his much younger wife, Jennifer (Embeth Davidtz). While Willie regards his appearance as a mere formality — figuring that his boss, LA District Attorney Joe Lobruto (David Strathairn), will designate a new underling to prosecute the case — Crawford is licking his chops. With Willie in place, Crawford figures he's committed the perfect crime.

At first glance, the mysteries and suspense of Fracture may seem slight. We're brought uncomfortably close to a vicious crime, at least dimly understanding an older man's rage at witnessing his trophy wife screwing a much younger cop, LAPD hostage negotiator Rob Nunally (Billy Burke). We notice that this very British killer gets his rocks off mind-fucking every human cog in the creaky and error-prone American legal system.

At first sight, Beachum is obnoxiously sure of himself. Noshing his way through the maze that leads to the asst. DAs' cubicles, Willie knows that every taxpayer-supported eye in the joint is undressing him, in one sense or another. But on this fine morning, as he celebrates conning a corporate lawyer out of his slot in the most predatory firm in town, Beachum runs head-on into the first human being he can't sweet-talk out of his way.

Overdressed for Superior Court and apologizing to the judge, Willie is at first amused that an old man, stuck behind the glass cage reserved for criminal defendants awaiting arraignment, is practically cruising him.

"The DA's office will assign another prosecutor."

What's not to like? Just as Paul Newman inherited roles that once had James Dean's name on them, Ryan Gosling now has his pick of what once was Newman's: playing brash, overconfident, self-regarding young men whose handsomeness would be a crime if they weren't complex losers. Newman, like Anthony Hopkins, could also be an unbearable prick on screen. His Hud, a heartless philanderer whose sense of entitlement disembowels a Texas cattle family, has not yet found its match in Gosling's short if spectacular resume, but this Beachum shows flashes of the charming bastard who could go nuclear with the right script.

Willie is more than a tad perturbed when homicide detective Flores (Cliff Curtis) informs him that the murder scene at Ted Crawford's mansion has not yielded the murder weapon. "He's fucking with us, this is a setup!"

The plot and theme of Fracture (from screenwriters Daniel Pyne and Glenn Gers) don't rate the highest marks, but the pros at work here have set up a sublime moral dilemma. Hopkins' perfect evil can be countered by a prosecutorial sleight-of-hand worthy of the Big Easy, or Willie can bet his career on doing the right thing. If he can figure out what that is.

A judge tells Willie that low-paying public jobs like his are occasionally redeemed by the opportunity they afford to "put a stake in the heart of some evil bastard." In the end, Fracture is a morality play: Crawford is a swine with an ingenious murder scheme, but it has only one visible flaw, which Willie may lose his soul trying to spot. Hopkins may seem like he's giving us Hannibal lite, but his fans may recall an even more complex bastard: in Mike Newell's underrated drama The Good Father, he's the angry dad who seeks revenge by subverting the child-custody plans of a lesbian couple ("I just wanted to do some damage!").

If you're up for a cerebral thriller, Fracture smartly alludes to story beats from the OJ Simpson case. It gives us an unlikely hero who removes his smartypants to read Dr. Seuss to a dying woman, while getting some bedtime in with his corporate lady-lawyer boss (Rosamund Pike). Gosling shows that he's more than ready for primetime. He proves that he is, in the words critic David Thomson coined to express his vexation at Newman's star turns, "something more than a vehicle for other people's fantasies."