Life & times of a reformer 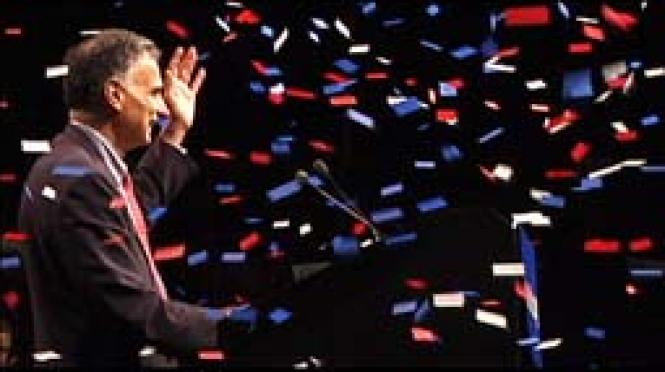 It's no accident that a fine movie about one of our strangest national heroes has been concocted by two novice filmmakers who met through standup comedy. Henriette Mantel's brother was obsessed with Ralph Nader after gulping down Unsafe at Any Speed, the budding consumer advocate's manifesto on why automobiles designed to fulfill sexual fantasies are only safe from a distance. Mantel's wonderful new Nader film, An Unreasonable Man (co-directed with her old comedy buddy, ex-Everybody Loves Raymond writer Steve Skrovan) is never able to crack the mystery of Nader's own ascetic life, although hairpins are dropped.

Nader describes being propositioned in a supermarket aisle: "Imagine being asked to a party while you're out shopping for cookies." This event, back in the mid-60s, would lead to the disclosure that Nader was being followed by General Motors' detectives. GM executives were incensed at Nader's attack against the sexy Corvair, one of GM's big profit centers. Their bungling led to an embarrassing corporate apology, and a wad of cash that would launch Nader into some of the most groundbreaking consumer reforms since the Teddy Roosevelt era. A long list of alphabet agencies were invented or reformed (EPA, FTC, FDA) that the filmmakers argue have saved 100,000s of lives.

An Unreasonable Man illustrates that the seemingly anti-business Nader is himself a brand who headed into this new century with a heck of a public image and a reservoir of goodwill. What happened? The film explores why Nader, once the darling of the left, is now such a pariah, especially in Democratic Party circles.

The short answer is, of course, the 2000 election. An Unreasonable Man tracks how Nader's film-industry fan club, the likes of Michael Moore and Susan Sarandon, decamped after Nader's Florida vote was credited by the Al Gore camp with tossing the election to Bush. The filmmakers provide interesting evidence that Nader might not be the real culprit, while demonstrating why he was an almost inevitable scapegoat for pissed-off liberals. Two prominent Nader critics, media theorist Todd Gitlin and iconoclastic columnist for The Nation Eric Alterman, are almost apoplectic in their demands for Nader to be excommunicated from the left. How could somebody many people had wished would run for President be so despised when he finally did?

The filmmakers should be commended for assembling a great cast of Nader supporters, past and present. They show through a tightly edited sequence of interviews how the consumer advocate's greatest victories were achieved under Republican rule. By the time Jimmy Carter made former Nader Raider Joan Claybrook his highway-safety czar, the seeds of dispute between the uncompromising Nader and the moderate Carter were already planted. Carter's failure to back Nader's dream of a cabinet-level consumer protection agency was crucial in the idea's failure in Congress, and, the filmmakers suggest, marks the real beginning of Nader's long decline as DC power-broker.

Nader's stubborn and fateful 2000 Green Party bid was inspired by his own Lebanese Christian-born father's admonition to stick to his principles. The Nader family political training is revealed in a childhood episode where Nader's equally fervent mom hounded then-Connecticut Senator Prescott Bush (grandfather to W.) for a commitment to build a dam to prevent another disastrous flood like the one that had wiped out their small town's business district. The dam was built, and Nader never forgot its lesson about speaking back to power.

The film's shortcomings probably lie in its failure to articulate how Nader's seemingly clueless neglect of sexual issues (and by extension, other non-economic symbols important to the lives of real people) may have prevented him from building a base comparable to that of Jesse Jackson, Martin Luther King or third-party gadfly Ross Perot.

A powerful scene shows Nader arguing without rancor with Boston cops dispatched to keep him from being even a spectator to the 2000 Presidential debates. In the end, Nader emerges as one of those singular American figures, a man with a position that, like Dr. King, almost eclipses the power of any mere elected office. Like Nader rival Al Gore, whose image has taken hits only to bounce back, Nader shares a powerful eco-constituency, a history of having hosted Saturday Night Live, and the determination to be a force for national transformation, whether in or out of office.