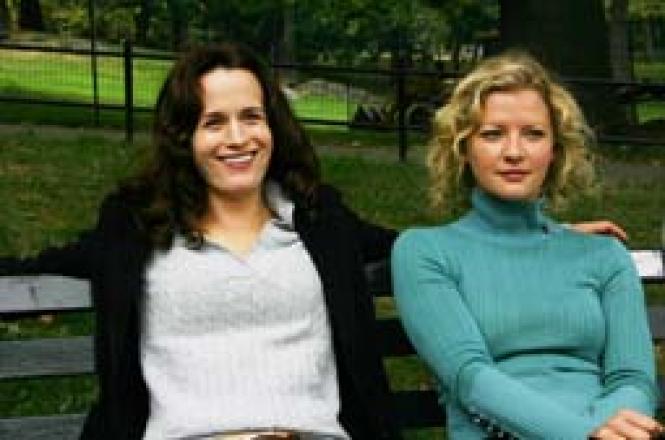 In Maria Maggenti's romantic comedy Puccini for Beginners, the opera-loving, novel-writing, obsessive-in-every-conceivable-way young lesbian Allegra (Elizabeth Reaser) is having the time of her life at the Metropolitan Opera enjoying Puccini's Turandot with three close female friends, including an ex-lover and a current girlfriend. It's only when the friends dine out that Allegra starts to suspect that they're not buying her theory about the great Italian opera genius as a proto-feminist.

Allegra's night takes an even bumpier turn when, upon arriving home, her girlfriend Samantha (Julianne Nicholson) refuses to take off her coat, instead announcing, "Allegra, we have to break up!"

"When was the last time we did anything together and did not end up in a fight?"

"No, aside from that. Let's face it: I hate opera, I have to look up half the words you use, and I'm not a lesbian."

"I can't believe you want to break up over some stupid little detail over who's a lesbian and who isn't."

"Allegra, I'm not a lesbian, and you're not the right woman for me, anyway."

Puccini for Beginners is Allegra's search for the right woman, which turns out to involve dating a gal named Grace (Gretchen Mol) while sleeping with Grace's ex-boyfriend Philip (Justin Kirk). Puccini employs a classic screwball comedy device: Grace and Philip learn of Allegra's infidelity at a wedding reception, and the main story is told as a flashback.

Allegra is a dyke who possesses a few too many bad male relationship genes. Trapped in a sexually satisfying but boring affair with Philip, a prematurely middle-aged assistant professor, she turns to the free spirit Grace, a woman who loses automobiles the way others misplace sunglasses. Grace longs to blow glass for a living.

Maggenti misses opportunities to get these characters out of their heads and into our hearts by allowing them to display some stupid but endearing traits. A dinner scene where Allegra foolishly exposes Philip to the scorn of her female friends presents possibilities, especially when Allegra is fielding a cell-phone call from Grace, but alas, there is zero frisson. I don't know if it's her TV background, three years writing the top CBS police procedural Without a Trace, but Maggenti sticks to a format of mildly clever verbal banter when the audience desperately needs to be distracted from the bad novel Allegra is making of her love life. Opens Friday.