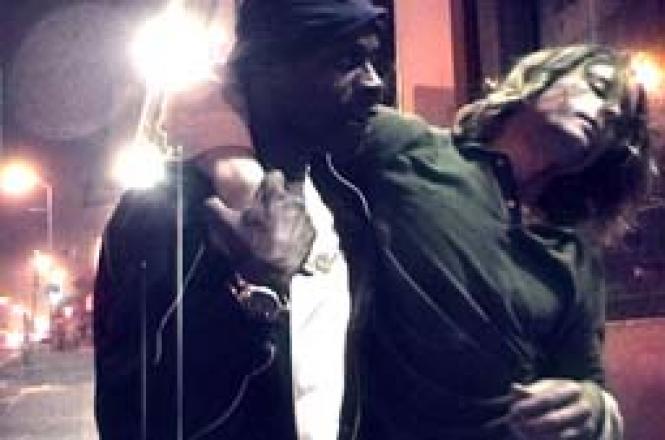 This 9th annual San Francisco Independent Film Festival [Feb. 8-20 at the Castro (opening night), Roxie, Victoria and Berkeley's California theatres] may represent the best lineup yet of digital instant classics. With an astute programming staff drawing on the resources of other great festivals like Austin's South by Southwest, this a media feast one might well justify devoting a hard-earned vacation to consuming.

25-Cent Preview In one of the all-too-rare made-in-San Francisco films that is no picture postcard, Swiss-born director/editor Cyrus Amini puts the Polk Gulch right on the same seamy map as LA's Santa Monica Boulevard or New York's Alphabet City, in a riveting, digitally-shot portrait of two grown-up little boys with survival skills you can't learn in Outward Bound.

Marcus (Merlin Gaspers) is a dirty blonde pretty-boy with just a touch of a Kurt Cobain-like mix of vulnerability and stubbornness, a guy comfortable in his rut, promising men and women more than he will likely deliver. Yet he's a guy with an inner child who is screaming. Gaspers is that rare performer who manages to hide some essential part of himself even while standing seemingly naked in front of you. His measured passivity is both true to the character and oddly seductive.

In one of the film's pivotal and truthful scenes, Marcus tells a longtime older male trick a story about a little boy who grew up without a father.

"I want you to understand something. You're much more important to me."

"What's more important than a father to a little boy?"

"Two equal partners who love each other." Pause. "I'll get you the money."

Dorian Brockington is sensational as Marcus' best friend DotCom, an angry black hustler who watches over Marcus in a relationship that one white john derisively refers to as a marriage, but which is the kind of complex mutual dependency system that can only grow out of a bond forged on one very mean street. Brockington's big, bad, black stud both hides a more tender inner core and represents the unique inverted-plantation system of Polk Gulch, ruled by a natural black aristocracy of pimps, dealers and super-hustlers.

With touches that suggest John Cassavetes' The Killing of a Chinese Bookie, John Huston's Fat City, or the Argentine master Edgardo Cozarinsky's saga of a mop-haired Buenos Aires rent-boy Rondo Nocturna, Amini's look at his lost boys is as honest as a hallucinatory ride on the 19 Polk, and as bracing as a punch in the face. (Roxie, 2/11; Victoria, 2/17)

Mischief at 16th and Florida SM Alonso provides a riveting rat's-eye view of a small corner of our precious hood. Drawing hilarious parallels between rats and punk rockers as two survival-prone species with a love for wet, smelly holes in the wall, Alonso recalls the heady days of yore when the DiMaggio brothers prowled the outfield at Seal's Stadium, while across the street, beer was brewed by the Hamm's and Rainer companies. Punks would later occupy the abandoned breweries, leading to the term "vat rats." A seductive female voice lulls us into some arcane corners of a lost city, including the vast sunken river that still flows deep underneath The Roxie. (plays with:)

The Ballad of Greenwich Village Karen Kramer's astonishingly comprehensive, star-laden guide to the birth of American Bohemia kicks off with a remarkably feisty 80-year-old Norman Mailer sitting in the fabled White Horse Pub recalling bygone halcyon days. "Our one idea above all was to get laid. The mecca for that was Greenwich Village. One of the ironies of today is that unless you're pretty high up in the bourgeois world, you can't afford to live in Greenwich Village."

Kramer's incisive portrait explains the Village's uniquely crooked streets; Edward Albee ties the origins of his break-out Zoo Story to a career panic in the Village; Woody Allen describes hanging out with Bill Cosby between comedy sets; a Louisiana boy recalls the pre-Stonewall Village as an early homosexual haven; and the whole experience is summed up in a Bob Dylan talking blues. (Victoria, 2/9, 11)

The Mermaid of the River If any one film defines Indie Fest, this is it. Argentine director Clodomiro Luque turns Charles Bukowski's Copulating Mermaid of Venice, CA into an outrageous if oddly poetic tale of two drunken buddies who swipe the corpse of a young woman one dark night. This thoroughly unwholesome but stylishly told short film details not only the best sex these macho louts have ever had, but also defines the turf Bukowski carved out for himself, and what distinguishes Latin film, in particular the secular film culture of today's Argentina, from here in the US of A. NC-17 wouldn't begin to deal with taboos smashed in this one. (Roxie, 2/11, 14)

Forgiving the Franklins Writer/director Jay Floyd provides a pitch-perfect satire on family life and religious values that would be Hallmark's Sunday Night Movie in a better world. The Franklins Ã¢â‚¬â€ mom, attorney dad, cheerleader daughter and football-player son Ã¢â‚¬â€ are locked into a suffocating view of what Jesus requires of them. A freak auto accident allows three family members a far more permissive view of original sin. The consequences soon rock their tight-knit North Carolina town to its very foundation, climaxing in a startling breakfast-table confession from quarterback Brian (Vince Pavia).

"[Coach and I] had sex in the shower, and it was really cool."

"You and the coach?"

"I'm just glad my first time wasn't with some idiot who didn't know what he was doing. It hurt like the dickens at first. He's kind of big, I guess. But then I let go of something in my head, and it didn't hurt any more."

"I'm just concerned that he could lose his job over such a thing."

"Why would he lose his job? I'm of age! I wanted it for three years. It was concentric sex."

"Consensual sex, dear, but I think that students aren't allowed to have sex with their teachers. I think I may want to have a talk with him."

The casting is dead-on, with Mari C. Blackwell utterly sublime as the Franklin's neighbor with a nasty hidden agenda. Teresa Willis and Robertson Dean are droll and athletic as a couple who find a remarkable home solution for a sex life stuck on neutral. Willis is very cheeky in a Tony Soprano-style stroll to fetch the morning paper, bathrobe optional. (Roxie, 2/20)

Ripple in the World Director Aron Cho creates a terrifying and at times weirdly funny slice of the American heartland in this twisted tale of a 22-year-old, shaggy-haired hotel night-clerk, Sam (Andrew Rush), trying in the worst way possible to quit his virginity with women. Afflicted with a rare sleeping disorder, Sam spends his nights trolling girlie websites. He gets fixated on a mysterious rent girl (Katie Dennett) in a red dress, but when he orders her from the online hooker delivery service, her messed-up transvestite brother (Star Kane) shows up instead, in the dress.

"Not what you wanted?"

"I wanted that dress! But not a man inside it, no offense."

Manhattan, Kansas Six years before this heart-wrenching personal doc begins, filmmaker Tara Wray had fled from the clutches of her mentally distraught single mom. She returned with a grant, a camera crew and a personal shrink to conduct her own video primal-scream therapy on why she was raised by a self-absorbed, would-be artist who exiled her birth-dad and persists in seeing herself as the queen of her own delusional world. The filmmaker's skill allows us to experience why our families are everything to us, while having almost nothing to do with our own perilous journeys. This one has an almost Oprah-like redemption, and yes, we are definitely in Kansas. (Victoria, 2/10, 16)

LOL Joe Swanberg's minimalist satire takes aim on his generation of techno-geeks, for whom electronic gadgets are a curse worse than booze, gambling and whores. An entertaining, light look at the diversions of the mobile phone, laptop world. By film's end, you may be ready to join one enraged techno-widow and scream, "It's just a telephone, for God's sake. Put it down and come to bed!" (Victoria, 2/10, 18)