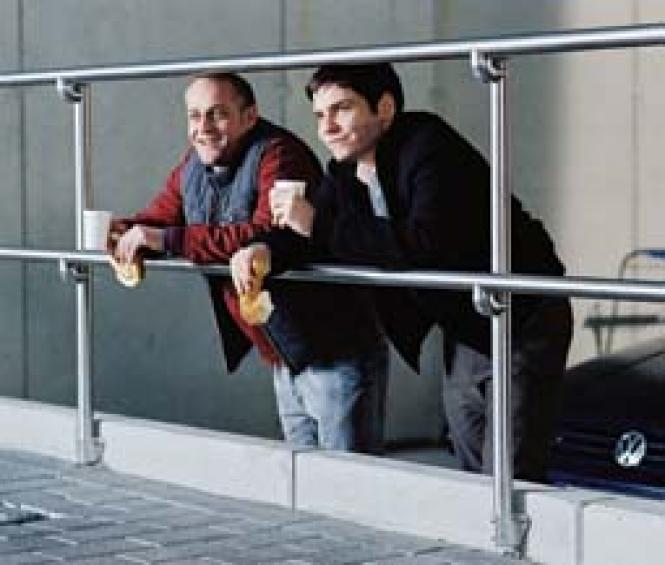 Jurgen Vogel and Daniel Bruhl in A Friend of Mine. Photo: Courtesy Berlin & Beyond

This 12th edition of Berlin & Beyond, new films from Germany, Austria and Switzerland, from Jan. 11-17 at the Castro Theatre, features over two dozen programs, including some impressive directorial debuts. Several films deal with the pain and dislocation following the 1989 fall of the Berlin Wall, resentment and retribution against foreign workers and the rise of organized crime in immigrant communities. A new wave of German filmmakers paints a bleak picture at times, of this still-emerging society.

A Friend of Mine In Sebastian Schipper's morose comedy, Daniel Bruhl is the painfully introverted Karl, a hotshot in the insurance business who's almost catatonic off the job. One day, the big boss tries to light a fire under Karl's ass by ordering him to work as an airport rental-car driver, supposedly to engage in industrial espionage, but really just to jerk him out of his shell and turn him into an aggressive team-player. While jockeying hot sports cars around the city, Karl meets pushy co-worker Hans (Jurgen Vogel), who dares him to be naughty. Hans tricks Karl into professing love to his girlfriend (Sabine Timoteo), in Spanish no less, whereupon Karl loses his nerve and turns on his buddy.

"You think it's 'cool' if I kiss your girlfriend? What's wrong with you?"

"You have a crush on her. But you have a little crush on me, too, right?"

Just when you think you know where this one is going, there's a nifty third-act switcheroo. Bruhl creates yet another fascinating portrait of a young melancholic getting comfortable inside his own skin. (1/13, 7 p.m.)

Tough Enough One of a trio of films that track the high price of German unification. When Michael (the angelic David Kross) and his model-pretty blonde mom are given the boot by her upscale boyfriend, they land in a Berlin slum which for a pretty 15-year-old might just as well be Chechnya. For openers, Michael gets his nose bloodied, his lunch money confiscated, and his sneakers stolen by a gang of young thugs led by bratty sociopath Erol.

As mom's choice in men reaches new lows Ã¢â‚¬â€ an especially clueless would-be artist gives the boy and us a taste of full-frontal male nudity Ã¢â‚¬â€ Michael discovers that the only protection from Erol is to run drugs for the Turkish crime boss. Director Detlev Buck uses Michael's escapades as a Baedeker to all those Berlin fun-spots normally off-limits to tourists. With a world view that lies between the Hughes Brothers and Tarantino, the day is saved only by Kross' out-of-the-box moxie as a once-privileged kid who barely hangs onto his looks and his soul. It's Tadzio versus Rasputin, with a climax containing some gut-wrenching blonde justice. (1/12, 7 p.m.)

Combat Sixteen Mirko Borscht tries to one-up American History X with a tale of a young (and again blonde) martial arts student, Georg (the steely, fighting teen Florian Bartholomai), whose work-obsessed architect father drags him to an Eastern German hellhole dominated by a neo-Nazi skinhead gang. Gradually, Georg surrenders every trapping of his old life in the West: bi-racial girlfriend, a chance of winning a state-fighting tournament, and (temporarily) even his good looks, alas! In the end, the story takes us through a testosterone-fueled Palookaville where Georg has to face off with his height-challenged doppelganger, Thomas. Ludwig Trepte is truly scary as a would-be teen Hitler. (1/14, 9 p.m.)

Wholetrain Florian Gaag's warp-speed portrait of the last stand of a Munich gang of subway-taggers is dominated by an incendiary turn by Florian Renner as Tino, a young guy hopelessly addicted to hanging with his buddies, so keen on covering an entire train with his gang's signature style that he even brings his infant son along on the great night. The film points up how young men will bond around almost anything, and shows the attraction of both German and Turkish kids to this effluvia of the American pop empire. (1/16, 9:15 p.m.)

Pingpong After discovering his dad's body hanging from a light fixture, 16-year-old Paul (the curly-haired brunet Sebastian) boogies out to his uncle's suburban dacha, where his sultry presence disturbs the delicate emotional landscape between dad, mom and his piano-student cousin Robert. Paul volunteers to retile the family swimming pool, but is distracted by a setting that cries out for incest. This is a family so besotted by upscale culture that they even name the dog Schumann. Director/writer Matthias Luthardt (with Meike Hauck) keeps the riotous sexual subtext on a suitably slow simmer. (1/15, 7 p.m.)

The Boy Without Qualities Thomas Stiller spins a remarkable fable, mixing fantasy and hyperrealism to describe the sad tale of a young man who lives most fully in his head. Tim (Marek Harloff is splendidly tormented), 26, lives with his dead mother's sister and her loutish boyfriend in an industrial slum near the waterfront where he gets occasional daywork. A chance encounter with a female fast-food worker challenges Tim to come to grips with his spinning-down life before it's too late. (1/14, 3:30 p.m.)

Vier Minuten (Four Minutes) "I know who you are. You're a stupid whore."

"No, I'm a stupid lesbian. That's your way of talking, isn't it? I once loved a woman. She's dead. I still love her."

An emotionally unhinged young woman prone to violence, and a world-weary 80-year-old female piano teacher who plies her trade in a women's maximum security prison give writer/director Chris Kraus' surprising little film the ability to walk a fine line between high-voltage drama and risible parody. I happen to think Four Minutes stays, sometimes just barely, on the right side of that line, never becoming a Teutonic version of an Ida Lupino laugher about a sadistic women's prison warden.

It kicks off as Jenny (the wondrous Hannah Herzsprung) wakes up to find a fellow inmate hanging dead beside her bunk. Jenny considers the situation and helps herself to the dead prisoner's cigarettes. Yes, it's that kind of prison.

Traude (Monica Bleibtreu, convincing as a stiff-necked Prussian culture vulture) is having a fine piano hauled into the prison only to encounter petty harassment from the anal warden (Stefan Kurt, swinging between bureaucratic sadism and media-savvy cheerleader). Treating him with barely concealed contempt, Traude reminds the official that another warden she once served under bore the title SS Sturmbannfuhrer. Both Jenny and Traude have enough back story to fuel an entire season of Oz. The film occasionally buckles under the sheer weight of their respective baggage: abusive dad, murder conviction vs. Nazi past and dead female lover. But it's to the credit of Kraus and his talented leads that we want to know more when we may have already learned too much. Jenny has a brutish side as well as a sexy-vixen persona that can excite or grate, and Traude is a real dinosaur, repeatedly ordering Jenny not to play that "Negro" music.

It's an erotically chaste but violently charged drama that clearly shows that a weaker sex does not live behind these bars. (1/15, 9 p.m.)

A scene from Summer in Berlin. Photo: Courtesy Berlin & Beyond

The Kick Writer/director Andres Veiel (with Gesine Schmidt) has fashioned a powerful experimental play from the trial of three East German youths convicted of the savage beating death of a young Jewish man. The 2002 death of 16-year-old Marinus Schonbert was especially notorious because his killers were drunk on booze and right-wing anti-foreigner ideology, had uttered anti-Jewish taunts during the crime, and had even borrowed their methods from the movie American History X. A chilling story enacted by two middle-aged actors: Susanne-Marie Wrage and Markus Lerch, who seamlessly morph into belligerent teens, then their seemingly clueless parents. Has a slight feel of The Laramie Project detailing the aftermath of the murder of Matthew Shepard. Like that film, the victim here, although evoked, seems to get short shrift, compared to the attention paid his killers. (1/13, 2:30 p.m.)