Deep inside the CIA 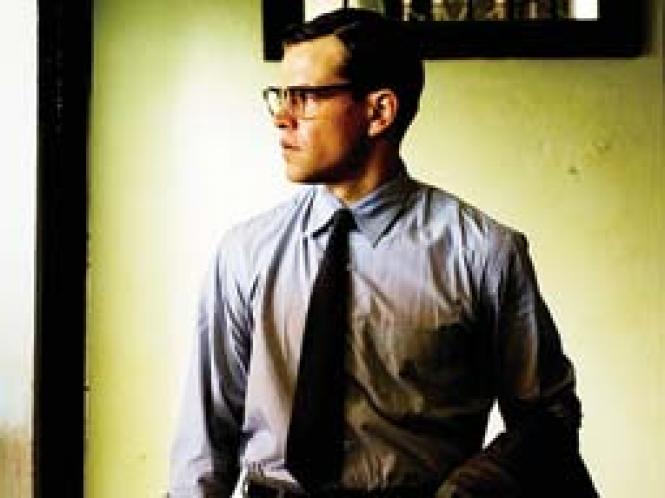 In The Good Shepherd, Edward Wilson (Matt Damon) is decked out as the lovely Miss Buttercup in a college production of HMS Pinafore when he gets a brazen proposition backstage that one-ups even the imaginations of Gilbert and Sullivan. It's the late 1930s, and young Wilson, a poetry major at Yale, is invited to join the school's most infamous secret society, Skull & Bones, whose members carry their rituals and loyalties to the grave. They include the elite players in our government: both John Kerry and George W. Bush are old Skull & Bones boys.

In a sequence that will both fascinate queer viewers and send a chill of recognition to those who had to survive the Cold War years with their souls intact, Wilson is recruited by an FBI agent, Sam Murach (Alec Baldwin), to spy on his poetry professor, Dr. Fredericks (Michael Gambon, in an Oscar-worthy supporting role). At first, Wilson is told that Dr. Fredericks is a Nazi trying to recruit on campus. Later, the professor seems to come on to him.

This is one of those rare films that makes emotional as well as intellectual demands on its audience. Francis Coppola reportedly withdrew from the project because he couldn't abide the characters' emotional disengagement. The reward for some will be one of the best screen explications of the goals of America in the world since Coppola's depiction of Cuba as a Mafia birthday cake in The Godfather II.

The film, based on the experiences of former CIA operatives, spans two decades, from America's WWII entry into the high-stakes spy game with the creation of the Office of Strategic Services (OSS) to the postwar cat-and-mouse game with the Russian KGB, climaxing in a CIA-engineered fiasco, the botched American strike against Fidel Castro at the Bay of Pigs.

Robert DeNiro does double-duty as director and as one of the film's few mildly sympathetic characters, the General, a crippled military-intelligence official who gives Wilson a glimpse into the true heart of darkness behind the CIA postwar mission. In a telling scene, the General tells the incredulous Wilson about the agency's ethnic pecking order.

"The President has asked me to look into creating a foreign intelligence agency. If we do this, we'll be looking for some patriotic, honorable bright young men Ã¢â‚¬â€ in other words, no Jews or Negroes, and very few Catholics, and that's because I'm Catholic."

Damon reaches another career peak as a character as cold-blooded as the murderous opportunist Tom Ripley. Damon is magnificent as a man who surrenders so much of himself in the course of serving his country that by film's end he seems destined to possess few recognizably human traits.

In the end, Damon finds a tiny sliver of his soul intact in his relationship to his son and namesake. From a chilly early scene where he refuses to alleviate the boy's bedtime fears of the dark to an emotionally incendiary scene of a father who comforts a little boy who has soiled himself at an upper-crust Georgetown Christmas party, your engagement with this very non-nurturing world will be tested by your reaction to the first time a character utters and actually stands behind the words, "I love you very much."