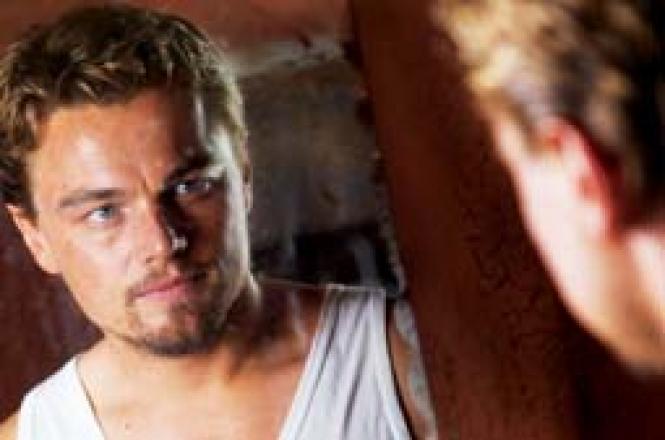 In a perfect world, the new Edward Zwick melodrama Blood Diamond would combine a doomed love affair with a cautionary tale on men's eternal lust for pretty stones — a cross between Casablanca and The Treasure of the Sierra Madre — and give us 138 minutes of riveting action before our hero makes the ultimate sacrifice. Fade out on very brief civics lesson.

Unfortunately, Humphrey Bogart and the films he inspired have been gone for 50 years, replaced by films like Blood Diamond, whose unrelenting violence is exceeded only by moral mush about buying bloodless diamonds. Most of my readers have been no closer to the diamond trade than the third act of Marathon Man; my own diamonds were used to play phonograph records. So the film's premise that the audience is both the problem and the solution is a non-starter for those of us who will never marry.

Message aside, the movie fails because its creators can't choose between a possibly compelling tale of a desperate African man, Solomon Vandy (the virile Djmon Hounsou), trying to save his prepubescent son from the cruel fate of turning into a child soldier, and a more traditional Hollywood love story between a hero of dubious intentions and a female reporter out to save his soul in order to save a continent.

When they first meet at an open bar in Sierra Leone, Danny Archer (Leonardo DiCaprio) and Maddy Bowen (Jennifer Connelly, reviving the plucky, slightly prudish karma of Andie MacDowell) start to regard each other with the proper carnal instincts, before their verbal foreplay descends into plot-advancing exposition. Loath as I am to cry out for yet another hetero bed scene, they are at the core of what makes these babies rock-n-roll. One of the problems may be Leo's reluctance to go the Titanic route again. Curiously, he's only performed in two other love stories: one, Total Eclipse, a very brave stint with a man; the other, a punkish Romeo and Juliet that was a bit too MTV. Having finally shed the almost girlish beauty of his youth, now not automatically more lovely than his leading ladies, Leo should again turn on the love-jets if he truly wants to inherit Bogey's mantle.

Besides an inadequate love machine, the movie's also missing a proper villain. There is a good candidate in a one-eyed rebel commander who vows to kill Solomon, but the dude is dispatched too early. Blood Diamond is an earnest bit of terribly correct liberal propaganda that proves one of Hitchcock's adages: a good film should never be about its MacGuffin.

Apocalypto I'm not sure why Mel Gibson decided to make an action-adventure film concerning the decline of the Mayan civilization with a sensational, androgynously beautiful young actor in virtually every shot, but I'm mighty glad he did. I'm not sure if it qualifies for Best Picture honors, but this gorgeously filmed thriller is a non-condescending glimpse at an ancient culture (the spare dialogue sections are in Mayan) grappling with issues of survival, tribal loyalties and life meaning. It has some intensely violent scenes, which can be tempered by strategically averting one's gaze for a few seconds.

The story concerns a young man, Jaguar Paw (Rudy Youngblood), whose peaceful jungle village is invaded by a rival tribe looking for slaves and candidates for ritual sacrifices. Jaguar Paw is forced to leave his pregnant wife and infant son in a deep pit. Their fate becomes an engrossing subplot.

For all his flaws as a human being, Gibson is a first-rate filmmaker who is drawn to riveting stories. Here, he succeeds without inflicting any of his poisonous dogma. Yes, the set-piece scene, where Jaguar Paw and the surviving men of his tribe are dragged to the Mayan temple to have their still-beating hearts extracted and their heads removed, does bear a slight resemblance to Passion of the Christ's excruciating pathway to the cross. But Gibson is not spiritually besotted here. The trail of torture is filmed in a hyperrealistic style.

Some truly miraculous things conspire to save Jaguar Paw. Everything we used to love in Saturday-morning serials has been revived, refined and used judiciously, including very scary sequences involving a huge rapids and a man-eating panther.

Besides the filmmaker's faith in his story, Apocalypto 's greatest asset is its unknown lead. Rudy Youngblood has a masculine but boyishly expressive face that reflects not only fear but also a kind of moral acuity rare in such an untested performer. Should he speak English, the movies will be his oyster, and quickly.

Gibson ends with a plot twist both surprising and fitting, in when-worlds-collide fashion. Apocalypto is the very best thing Gibson has done as a director, and should not be missed because of a shared repugnance for his off-screen worldview.