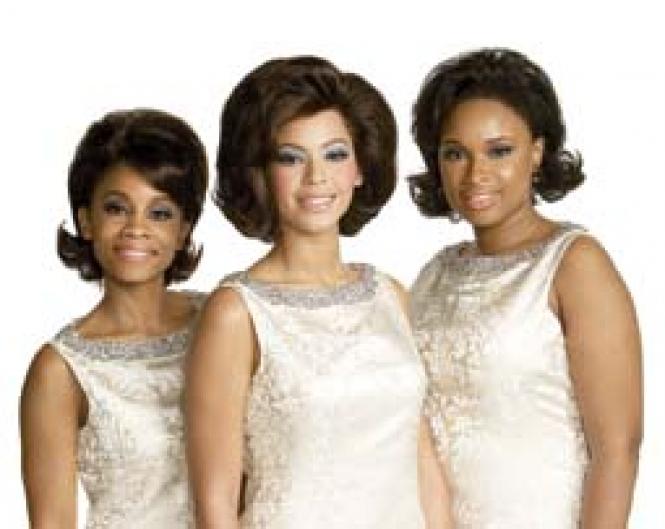 It has taken 25 years for Michael Bennett's Dreamgirls to go from Broadway to the big screen. The delay can be forgiven, however, because the film rocks on all levels. Set in the early 1960s and very loosely inspired by the story of Diana Ross and the Supremes, Dreamgirls is about three black teenagers from the Detroit projects (Jennifer Hudson, Beyonce Knowles, Anika Noni Rose) who seek success as rock-and-roll singers. Two of them make it, and all three pay an unexpected price for aspiring to fulfill their fantasies.

Zaftig Effie (Hudson) has the voice, while beautiful Deena (Knowles) and naive Lorrell (Rose) sing back up. At an amateur-night talent contest, they're spotted by a would-be promoter, Curtis Taylor, Jr. (Jamie Foxx), who persuades R&B star James "Thunder" Early (Eddie Murphy) to use them in his touring   act. Early's long-time manager Marty (Danny Glover) thinks it's a mistake and resigns in protest. Effie isn't keen on the idea either. She's a terrific singer,  believes in herself and The Dreamettes, and would rather wait for a true break. Among those urging her to accept is her songwriting brother C.C. (the stunningly handsome Keith Robinson). Finally, she agrees.

Lorrell is soon seduced by the married Early, while Effie and Curtis begin a romance. Touring is demanding and not especially rewarding. Curtis eventually gets the girls booked into a white nightclub. They are thrilled, until they hear the condition. Deena is to sing the lead, Effie and Lorrell backing her up. Deena and Effie object, but Curtis and C.C. eventually convince them. The girls are a success, and Curtis begins marketing them, focusing on Deena at the expense of the others. Effie's resentment and sense that Curtis is now in love with Deena lead to clashes and a confrontation between the two women. Effie is replaced, which stuns her, as does C.C.'s decision to continue writing songs for the new group. She responds with the celebrated aria, "And I'm Telling You, I'm Not Going."

The Dreamettes take the country by storm while Martin Luther King, Jr. is addressing America's racism. Effie, meanwhile, has Curtis' baby, and keeps the knowledge from him, Deena, and Lorrell. She winds up on welfare while she watches her former friends succeed beyond imagining. The "whiter" they become, the more in demand they are, and the more celebrated Deena is for her beauty and style.

The relentless pressure to appear less "black" proves too much for Early, who escapes with cocaine, then succumbs to it. Guided by Marty, the volatile Effie starts singing again in small clubs. C.C. comes back into her life, deeply sorry for his betrayal, and pleads with her to record a song he has written. She does and it begins to get play, until Curtis hears it and has Deena cover it, and it becomes a smash for her. When Deena finds out what happened, she confronts Curtis and reclaims herself.

Under Bill Condon's dazzling direction, the entire cast gives expert, nuanced performances. The beautiful Knowles lights up the screen as the gorgeous Deena. She's warm, sympathetic, charismatic, and principled. She handles the singing and dancing superbly and is utterly convincing showing Deena's growth and basic decency. Newcomer Hudson plays the complex, often difficult, but fundamentally good Effie with remarkable insight. She delivers the powerhouse "I'm Not Going" with a brilliant mix of anger and pain, an improvement over the way Jennifer Holliday, who created the role on stage, sang it. Holliday's fury masked her hurt. Hudson's interpretation is more balanced and much more moving. Effie knows she has great talent and is understandably frustrated and enraged by a society that judges women primarily by their appearance, and that assesses black women by how much like white women they look. She also knows that she is attractive, but not in Deena's league. Rose is charming as the sweet, vulnerable Lorrell.

Foxx brings a sleazy charm to the opportunistic and brilliant Curtis. Murphy is a revelation in his musical numbers and touching in portraying Early's vulnerability. Robinson makes C.C.'s betrayal and remorse convincing and is especially moving when reconciling with Effie. Glover's Marty has great dignity, integrity, and strength. He's also the only consistently good man in the story.

The musical numbers are stand-outs, recreating the Motown era without condescension. The score, by Henry Krieger and Tom Eyen, remains fresh. The pervasive racism of American society in general, and the music business in particular, is shown without shrillness, a tribute to Condon's terrific screenplay. The splendid costumes are by Sharen Davis. It's rare when the movie version of a hit play is actually better than the original, but this is one of those times.

Opens Friday, December 15 at the AMC Metreon in San Francisco for a 10-day run before going into full release.