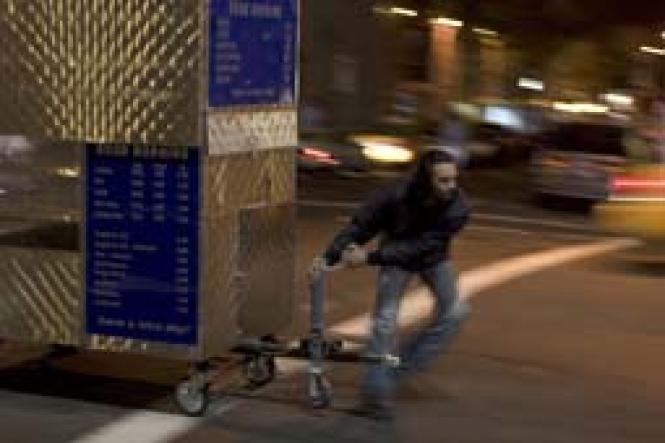 One of the greatest film experiences you're likely to have this holiday season arrives this week very quietly, as if walking into Bay Area theatres on the paws of a cat. Appropriately enough, one of the dramatic moments in Ramin Bahrani's evocation of New York City street life as seen by a Pakistani immigrant, Man Push Cart, is a scene of Ahmad (Ahmad Razvi) digging an illegal grave for a tiny dead kitten, an act that a friend reminds him could get them both in trouble.

"Ahmad, what are you doing? It's getting bad for people like us these days."

"This is fucking America, and whatever I want to do, I'll do."

That passionate speech, cruelly ironic in terms of Ahmad's life, comes from a long-haired, still youthful man, who was once a big rock star in his native city. "The Bono of Lahore," a fellow Pakistani puts it, a wealthy ex-pat who offers to be Ahmad's patron. It's an offer that will squeeze every possible nuance out of the terms patron and patronizing.

Filmmaker Bahrani gloriously fulfills his aim to make a real New York film. Ahmad (splendidly brought to life by first-time actor Razvi, whose real life as a Manhattan pushcart operator inspired the film) is as definitive an outsider as Travis Bickle. Unlike Robert DeNiro's nihilist loner, Ahmad doesn't let his job in the basement of the food chain infect his view of his customers or his fellow immigrants. Rather, he maintains a dignified stoicism, a faÂade that hides a bottomless sorrow.

Razvi is one of those natural performers whose face betrays the subtlest changes in his character's constantly shifting predicament. Bahrani, with incremental layers of painful backstory, uses his kinetically mobile camera to rub our faces in Ahmad's daily struggle to keep his cart from running over him on those rough New York streets. Throughout the film, the classical design of the Chrysler Building, its Art Deco beauty a beacon from an earlier New York, appears to Ahmad, hinting at all the lovely things that lie just beyond his reach.