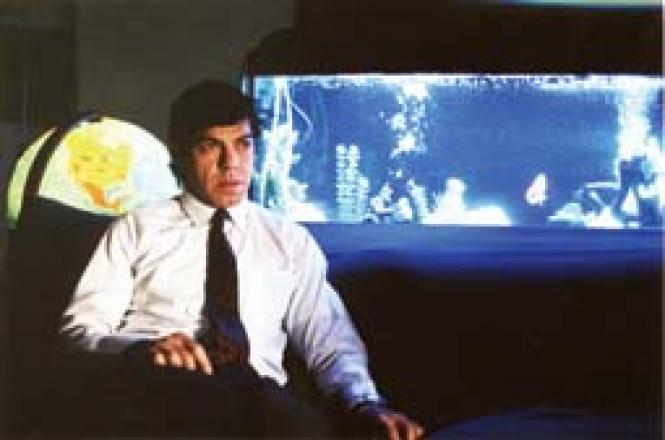 Scene from Sorry You Can't Go Through.

An astonishing, Brando-like performance, a stimulating survey of an important national film culture, and the prospect of really superb food and wine offer some excellent reasons to sample the 10th edition of New Italian Cinema from the San Francisco Film Society (November 12-19, all shows at Landmark's Embarcadero Cinemas). Essentially an Italian version of the Goethe Institute's splendid Berlin and Beyond festival of German-language features, New Italian Cinema is an eight-day feast of the works of Italian filmmakers, North and South, male and female, with both feature-length works and promising short subjects. The highlight of this year's lineup is a three-film tribute to the veteran auteur Marco Bellocchio.

Like his contemporary Bernardo Bertolucci, Bellocchio (born 1939) has fashioned a career-long critique of capitalism, the Catholic Church and Italy's conservative (at times, downright reactionary) middle-class. Of the trio of films in the Bellocchio tribute, the one you absolutely mustn't miss is his sublime 1965 debut work Fists in the Pocket.

Sorry You Can't Go Through "I washed his car."

"That guy deserves it. He's punctual, reliable, confident, no rash decisions. He lights up my life."

A sweet, loopy and somewhat retro, 1960s-feeling comedy reminiscent of a Hollywood subgenre where a sexually confident guy advises a "shy" friend on how to land a lady. The twist here in this mostly engaging mild farce from directors Paolo Genovese and Luca Miniero is that the confident guy is an energetic but terminally bored pensioner. Walter is looking for a young guy he can "adopt," under the theory that for every senior "parasite" like himself drawing a pension, there is a bumbling but hard-working younger guy toiling thanklessly and unhappily at some soul-killing job. Walter finds his charity case in the person of Piero, a hideously inept debt-collector who can't summon the courage to stand up to anybody, including the local video-store Nazi. Enjoyable for its offbeat, non-queer bout of man chasing man, and two odd-couple performances. (11/15, 9:15 p.m.; 11/16, 6:45 p.m.)

Fists in the Pocket Swedish-born actor Lou Castel absolutely steals this brutally honest and at times weirdly funny portrait of a middle-class family on the verge of extinction, its members so beset by hereditary diseases, natural afflictions and personal animosities that they can barely get through their nightly version of the dinner hour. The first thing you notice is the white cat eating off the plate of the clan's now-blind mother (Liliana Gerace), which is never a good sign. The younger brother Leone (Pierlugi Troglio) is mentally retarded; his older sister Giulia (Paola Pitagora) is afflicted with epilepsy and wild mood swings, leading her to play footsie under the table with her charismatic but extremely volatile older brother Alessandro (Castel), who has confessed a desire to murder them. The only apparently normal family member is the charming but selfish oldest brother Augusto (Marino Mase).

In his early 20s at the time of filming, Castel's wholesome Nordic features conceal a well of energy that can cause him to go from seeming repose to a dervish-like whirl of activity. In one scene, he refuses to dance at a party, but later bounds like a man possessed over his dead mother's coffin while boasting responsibility for putting her there. Castel holds you hostage to his moods. His Alessandro is a cauldron of feverish ambitions, but both his epilepsy and some inborn fear keep him from forming a plan for his life that doesn't lead to murder and suicide. His almost unbelievably moving death scene, to the strain of an aria from Verdi's La Traviata, is one of those singularly mesmerizing screen performances that may have you lining up for the Criterion DVD edition. (11/13, 9:30 p.m.)

Good Morning, Night Bellocchio's talents are put to an equally primal if less spectacular purpose as he re-imagines the 1978 kidnap/murder of Italian leader Aldo Moro by a Red Guard band of ultra-leftists. It's deftly seen through the eyes of a young woman (with some lovely dream sequences, including one where a sorrowful but engaging Moro simply walks out on his captors), the gang's lone female member. Bellocchio speculates on the underlying motives for what he clearly feels was a misguided attempt by Italy's disaffected class of young Communists to smash a state they felt to be hopelessly compromised by deals between industry, the Church and a smug middle-class. The film offers apt comparisons to our current politics: the uncompromising elements of the environmental and animal rights movements on the left, and the anti-immigration vigilantes of the right. (11/13, 6:45 p.m.)

Three Days of Anarchy Director Vito Zagarrio explores a moment when political time stood still, in this low-key drama about a small Sicilian village left to rule itself for a tumultuous three-day period in 1943 between the fall of Mussolini and the arrival of American troops officially "liberating" Italy. A sexy if politically naive young literature student named Giuseppe (Enrico Lo Verso) is wooed by all factions in his village from aristocratic to Communist, as well as by dames of conflicting political persuasions. If you've ever been drawn to true anarchy, see this film for a cogent if uniquely Italian look at why it seldom works for very long. (Closing Night, 11/19, 5:30 & 9:30 p.m.)