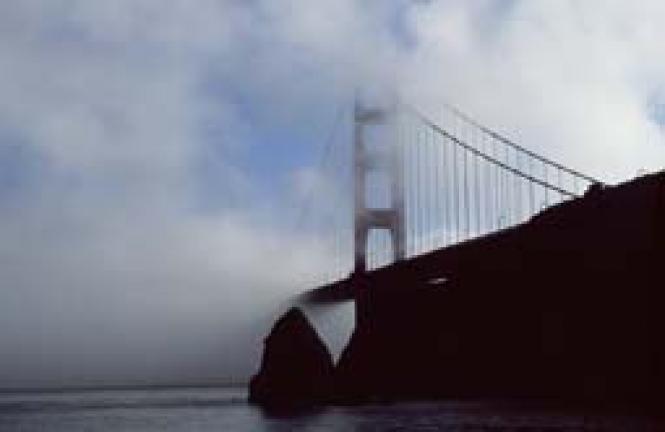 San Francisco's Golden Gate, a "suicide
magnet" in The Bridge

"I was reminded of the painting by Peter Breughel, Landscape with the Fall of Icarus. In the corner of the painting, a pair of legs disappears into the water with a splash so small it is hardly noticed by the other people in the picture, much less by someone in the museum."

"Having watched the World Trade Center collapse from my window, I imagined that the people who jump from the Golden Gate Bridge must be trying to escape from their own inferno." Ã¢â‚¬â€œEric Steel, director of The Bridge.

In 2004, prompted by a New Yorker article describing the Golden Gate Bridge as "the world's most popular suicide magnet," Eric Steel decided to see if anything of value could be learned by training a camera on the bridge for a year. Obtaining permission from bridge authorities with a film statement that disguised his true intentions, Steel found two spots where he could film the bridge during daylight hours. Two of the cameras would be locked down, essentially producing a continuous video postcard while two others, equipped with telephoto lenses, would spy the thousands of individuals who cross daily on foot and by bicycle. Steel established guidelines by which he and his crew could speed-dial bridge officials if they spotted a person who crossed an invisible line separating a lonely bridge walker from individuals bent on taking their lives.

The resulting film presents viewers with a moving if perplexing experience. Not knowing what I was going to witness, I was initially shocked at how quickly and almost casually a large non-descript middle-aged man climbed the four-foot barrier and simply jumped off. They say the fall takes barely four seconds and that most jumpers die instantly.

Even more unsettling is the agonizing slow motion portrait of a tall slender youngish man, with long black hair Ã¢â‚¬â€œa figure who appears as if he should be fronting a Goth rock bandÃ¢â‚¬â€œ seen traversing the bridge in both directions before taking a horrifying backwards plunge.

Eric Steel devotes the bulk of The Bridge 's 93-minute running time to conversations with surviving relatives and friends. The most troubling story is that of Gene, the young man in black, whose friends describe him as depressed from the time of his teens, born to a single mother, whose death from cancer left him bereft and openly suicidal. A friend, Dave Williams, expresses his anger at Gene for taking his life, recalling that he often asked Gene to lean on him for support, "I am your brother from another mother."

Gene's story is not only the most heartbreakingly sad of the tales, but some viewers might accuse the filmmaker of exploiting the dramatic footage of Gene, prior to and during his fatal plunge, since this is clearly the terrifying climax whose inevitability we dread and yet in some odd way anticipate.

The Bridge is one of many current non-fiction films that seeks to erase the previously clear line between fictional and true life drama, a line that once erased leaves us with some of the same unsettling emotions towards life that may have been held by the late subjects of this film. Unlike the filmmakers, who first witnessed Gene and the others in real time, we the audience can't push speed dial, can't summon any help at all to cope with an unacceptable sight, except the option of averting our eyes, or ducking down under our seats, my strategy as a child for avoiding levels of make-believe mayhem from horror film maestros Christopher Lee or Vincent Price.

For me The Bridge redeems itself with one unexpected outcome that, if not happy, is at least ongoing.

One day, several years ago, a very sad San Francisco kid, Kevin Hines, ducked out of class after first period. Pausing only to grab a "last meal" of his favorite junk food from a nearby Walgreens, Kevin hopped a northbound number 19 bus to the bridge parking lot. Kevin describes crying all the way, hoping that some stranger on the bridge that day would ask him what was wrong. As soon as his feet cleared the railing Kevin knew he had made a mistake. He tells of bracing himself for the crash into the water, feet first, and miraculously surviving a plunge that has claimed more than 1300 lives since the span opened in 1937. Years later, with the support of his father, Kevin takes it a day at a time, sadly telling the camera, "I just want to be normal again, but I never will."

Occupying an odd middle ground between art and agitprop, The Bridge is clearly designed for a court of public opinion, to goad a liberal Ã¢â‚¬â€œ if historically ambivalent Ã¢â‚¬â€œbridge board into coughing up the estimated $25 million dollars necessary to erect a bridge barrier that would foil would-be leapers.

Watching The Bridge, not knowing how to think or feel about the dreadful sights before me, I flashed back a decade when my close friend Karl took his own plunge from this life.

The Bridge is not for everyone. Some will be angered by Eric Steel's unflinching look at what is still, in a world beyond sin, among the most unacceptable sins of all. Others will see it as fulfilling our silent social contract with the most vulnerable among us.