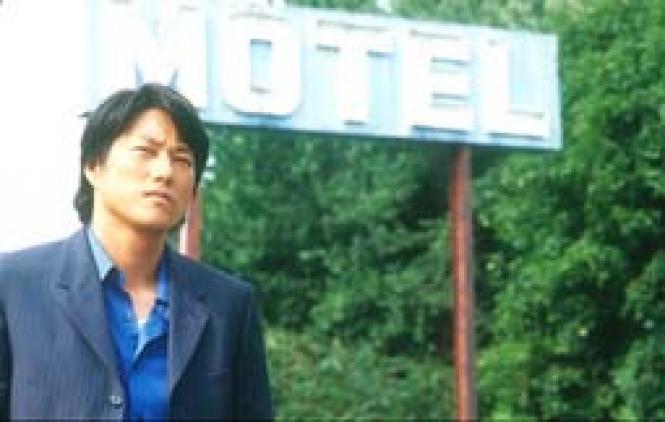 "Mommy, how come people stay at our house?"

"Because they can't go home. They're poor."

"Is that why they're so angry?"

"They're not angry. They're just poor."

"How come people stay at our house for three hours?"

"How come they're so loud when they take a nap?"

In his debut feature The Motel, writer/director Michael Kang displays a flair for non-plot-driven humor, while creating a character usually missing in action from Hollywood teen comedies. Ernest (Jeffrey Chyau) is a chubby, Chinese American boy who divides his time between stabs at short fiction with shifts as a maid washing the residue of sex from the rooms of a seedy Upstate New York motel. The business is under the steely-eyed rule of Ernest's no-nonsense mother (Jade Wu), who wields a baseball bat on her unruly customers and a sharp tongue on her daydreaming son. "Mommy" fears her boy is wasting his time (and his potential contribution to her retirement) on frivolous writing. She sniffs at Ernest's "honorable mention" in a writing contest, "That mean you worse than loser."

When we first spot him, 13-year-old Ernest is stuffing an egg roll in his mouth while spying on the object of his burgeoning lust, Christine (Samantha Futerman), a self-assured 15-year-old who is Ernest's sometime playmate, but who has her eyes on a different prize: a pretty white skateboarder whose rowdy posse hangs out in the parking lot of her parents' restaurant. Christine encourages Ernest to enter the writing contest, and she wouldn't mind if he takes her as his companion to the awards dinner, as long as he doesn't consider it a "date."

Caught between the demands of two uncompromising females, Ernest finds an unlikely mentor in Sam (a feisty turn from Better Luck Tomorrow star Sung Kang), a volatile, irreverent Korean American playboy who is, at best, a perplexing role model. Sam keeps Ernest guessing about his line of work as his credit card for room rent keeps coming back "declined." Still, the hyper-kinetic, tart-tongued Sam is the closest thing Ernest has to a father figure. Sam, whose public goofball facade (a mix of silly ethnic jokes and cartoon martial-arts moves) conceals a never-explained romantic misadventure, gradually pricks the overly serious boy to rebel against his domineering mom, his snooty would-be girlfriend and, ultimately, against Sam himself.

Michael Kang resolutely sticks to telling the story from Ernest's limited point of view so that his late-night adventures in his mom's car under the rambunctious tutoring of Sam remain as mysterious as the boy's tantalizing future, where, as his mother reminds him, "You'll be able to do anything you want, just not right now." The Motel is a low-key if well-paced series of comic vignettes about the obstacles to manhood in a chaotic society in which you're still very much an outsider.

Like David O. Russell (Spanking the Monkey ) and Kenneth Lonergan (You Can Count on Me ), Kang astutely milks the beautiful backwater countryside of "red state" rural New York for melancholy insights about how tedious life can be in a region that peaked with the opening of the Erie Canal. Kang sticks to his story's low-key life lessons, refusing to offer a more high-octane epiphany than this 76-minute first feature can sustain.