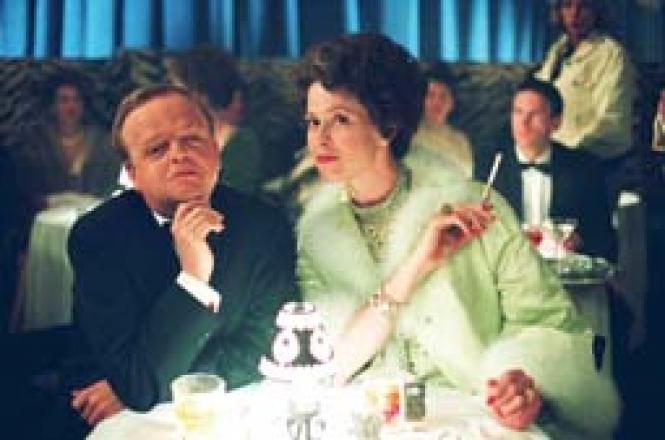 "Have you met them?"

As one who has sat up all night on two different occasions ingesting In Cold Blood, Truman Capote's meticulous attempt to transform the story surrounding the brutal murder of a Kansas farm family into the stuff of Greek tragedy, I have to confess that I'll never tire of hearing how he pulled it off. Fortunately, writer/director Douglas McGrath, who cut his teeth as a writer on Saturday Night Live, and whose film credits include a suspiciously homo-romantic version of Charles Dickens' Nicholas Nickleby, wasn't afraid of seeming frivolous or flip in his treatment of the material. It ranges from broad social commentary to a harrowing prison drama that makes one of the best cases yet seen on screen for the abolition of the death penalty.

McGrath opens Infamous with a nightclub scene where Truman (played with an astonishing and at times cheeky verisimilitude by British stage actor Toby Jones) is seen utterly enthralled by a Peggy Lee-like chanteuse (Gwyneth Paltrow). In the middle of an upbeat version of Cole Porter's "What Is This Thing Called Love?," the singer is suddenly overcome by the implications of her material, and for a moment while the band and audience look on in amazement and horror, it appears she won't be able to finish. This scene reverberates through the rest of Infamous as Truman realizes that the truth behind why Perry Smith (Daniel Craig) murdered the Clutter family may lie uncomfortably close to dark secrets from the writer's own troubled, poor white Southern boyhood.

McGrath bases his film on George Plimpton's Capote, an oral history of the writer and his indiscreet relationships with a coven of emotionally needy New York society gals, including the wife of CBS board chairman William S. Paley, Babe Paley. The scenes reveal an earlier, wilder New York, where the rich and famous dared to look foolish, at least amongst themselves. A delicious moment has Babe Paley (Sigourney Weaver, whose dad Pat ran NBC) teaching the twist to a bemused bevy of socialites including Capote publisher Bennett Cerf (Peter Bogdanovich).

McGrath and Jones show us an untamed and wildly operatic Capote who arrived in Kansas like a small, effeminate tornado. Using his childhood friend Nell Harper Lee (one of Sandra Bullock's best stabs at character acting) as an ambassador to the very prim citizens of Holcomb, Capote discovers that he can ingratiate himself with the locals the same way he has wooed his New York "swans," by trading stories about his days writing scenes for Humphrey Bogart on the set of John Huston's weird satire Beat the Devil.

A scene where Jones' Truman beats Jeff Daniels' crime investigator Alvin Dewey at arm-wrestling, as he supposedly beat Bogart, is in itself almost worth the price of a ticket to Infamous .

The movie will win its queer audiences over with a far more unvarnished peek at the relationship between Truman and his longtime boyfriend Jack Dunphy, and Dunphy's jealousy at the love that breaks out between Truman and Perry Smith. The scenes between Daniel Craig as Smith and Jones as Truman are likely to be the most unsettling for fans of last year's Capote. Beginning with Truman's entrance into the Kansas cell block and the chorus of death-row inmates yelling, "Suck my cock," to the brutal and very physical showdown with Smith in a very small cell, your inner voice cries out, "Could this really have happened?"

Later, when the filmmakers graphically show us just how long it takes for a man to die by hanging, and Capote's anguished reaction to the death of his prison soulmate, you may agree with Lee's sad assessment that three people died on the gallows that night.