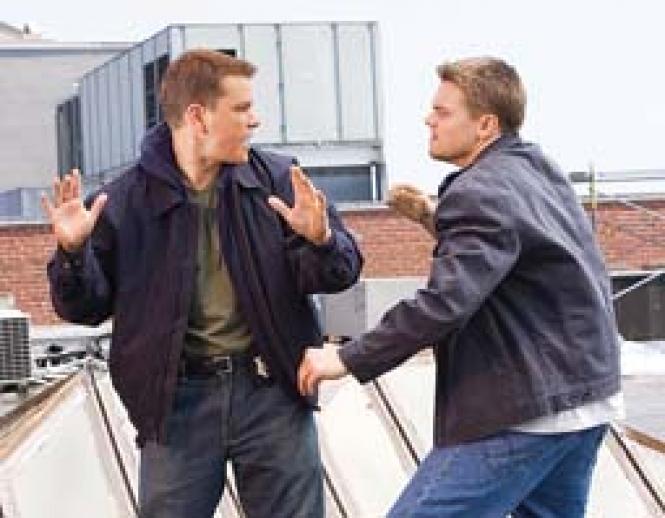 In The Departed, a crackerjack new crime thriller from Martin Scorsese, two freshly scrubbed members of the Massachusetts State Police Academy, Billy Costigan (Leonardo DiCaprio) and Colin Sullivan (Matt Damon), train to be state troopers or "staties," not so much to serve the people of the Commonwealth, but rather in service to an all-demanding crime daddy, Frank Costello (Jack Nicholson), who serves up something far tougher, more elusive and yet more necessary than love.

As Billy comes to work for Costello as just another Irish punk off the street, we the audience know that actually he's a mole working for the department's crack anti-mob unit, trying to find evidence to put the big boss away. Meanwhile, Costello has his own informant, Colin, supposedly a crime-unit cop, but actually Costello's spy. The plot thickens as each mole gains a troubling awareness of the other's existence. The stakes are raised further by the fact that Billy and Colin have a woman in common, the department's psychologist, Madolyn (Vera Farmiga).

As with Scorsese's masterwork Raging Bull, The Departed is a virtual ballet of physical bloodletting. But in truth, the more insidiously brutal side of the film lies in an operatic barrage of homophobic language. In Raging Bull, fighter Jake LaMotta's brother/manager Joey thinks that all the men in their Italian-American mob-connected neighborhood have had their manhood tainted because "their mothers take it up the ass." To the Irish-descended men of The Departed, no amount of protestations of one's manhood seems to suffice, as a training officer remarks while watching a squad of half-naked police cadets straining to pass the police fitness test.

"Marriage is supposed to be about letting everyone know that you're not a homo, that somebody trusts you, and that your cock still works."

The characters in The Departed are so concerned that they're pumping premium-octane testosterone that the cock-strutting becomes downright funny. "All firemen are fucking homos."

There is also the now-obligatory swipe at Catholic priests as Nicholson's Costello barks to an underling in a local diner, "What did you confess to that opinionated pederast?"

Language, too, is at the core of Nicholson's broad but menacing turn as a mobster who has a whole neighborhood quaking to pay him tribute. In an early scene, Costello corners a prepubescent Colin at the local candy store with an ironic recruitment pitch.

"You did good in school?"

Later, Billy is browbeaten into spying on Costello by another street-smart and swaggering cop, Dignam, a sensational turn from Mark Wahlberg, going back to his Boston roots and accent.

While Nicholson steals the film's long set-up, the second half of The Departed becomes a psychologically taut battle of wits and nerves between Billy and Colin, as each sniffs closer to the other's identity. As the body count around them rises, both men start looking for an exit strategy that doesn't seem like an out-and-out betrayal of their very twisted tribal roots.

The Departed for DiCaprio is the latest chapter in his journey under Scorsese to finally appear to be a fully adult action-hero in the eyes of critics who have yet to accept his transformation from the "girly-boy" heartthrob of Titanic. There's no Oscar on the horizon yet for Leo, but playing a tragically tortured, uptight Irishman seems to have won him some newfound respect. Early in the film, Nicholson's Costello literally beats the last vestiges of boyish charm out of DiCaprio's Billy. At film's end, Billy stands on a Boston rooftop holding a gun to the head of the one man who can make him whole.

The physical resemblance between DiCaprio and Damon gives them the unsettling appearance of siblings separated at birth, leading one to joke that an equally appropriate title for The Departed would have been My Doppelganger Is Trying To Kill Me.