Independent by their own design 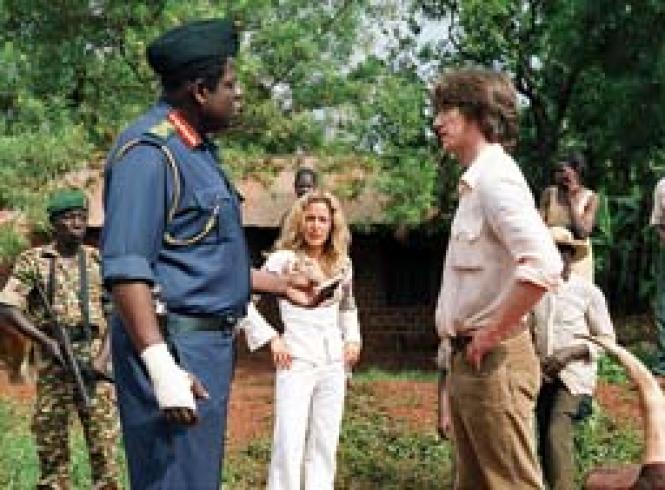 This 29th Mill Valley Film Festival, October 5-15, inspires and entertains with an eclectic menu of treats. Bay Area premieres by international giants include Babel, the third installment of a trilogy from Mexican auteur Alejandro Gonzalez Inarritu; Venus, an Oscar-worthy turn by Peter O'Toole as an old man smitten by a seemingly unsuitable young woman; and The Queen, Stephen Frears' drama about a sitting British monarch's failure to cope with the unexpected demise of a daughter-in-law she never really cared for. There are tributes to Darryl Hunt, Helen Mirren and Tim Robbins; a world-class children's festival with 11 features; and a showcase for short films, the 5@5 series, six programs alternating between the festival's major venues, CineArts at Sequoia in Mill Valley and The Smith Rafael Film Center in San Rafael.

The Last King of Scotland "If I could be anything but a Ugandan, I'd be a Scotsman, except for the red hair, which I'm sure is quite attractive to your women, but to us Africans is quite disgusting!"

Based on a prize-winning novel by the British-born, African-raised Giles Foden, this emotionally harrowing, intimately shot film from Kevin Macdonald imagines a chance encounter between a slender young Scottish doctor and a charismatic military ruler of a tragically beautiful slice of Central Africa. Nicholas Garrigan (James McAvoy) picks Uganda as the place to escape his naive ways and skimpy servings of his mother's stew. Fate places the doctor at the service of the newly installed military dictator, General Idi Amin Dada (Forest Whitaker). An electric chemistry between McAvoy and Whitaker allows us to suspend our disbelief at the doctor's feckless gullibility, and cushions our shock when paranoia overtakes Amin and leads to the extermination of half-a-million of his countrymen. Warning for scenes of horrific torture that brought gasps from normally unflappable critics. (Opening Night, 10/5, Rafael)

3 Needles Known to queer audiences for modestly-scaled, gay-themed docudramas (Beefcake), filmmaker Thom Fitzgerald has taken a giant stride forward in this three-part/three-country parable of the insidious effect of the AIDS virus, hiding in weakened immune systems and using quirks of national custom and human foibles to become a silent killer. In China, a young woman running a mobile blood-collection service stands by helplessly as tainted blood products infect an entire village. In Canada, a lovely but shifty porn star betrays the cast of his production company until his religious mother finds an odd path to salvation. In South Africa, an idealistic young nun finds her vocation altered by the desperate plight of AIDS orphans. An all-star cast includes Chloe Sevigny, Stockard Channing, Shawn Ashmore, Sandra Oh and Olympia Dukakis. (10/13, 15, Sequoia)

Emile Norman: By His Own Design A working artist now in his mid-80s, Emile Norman was among the founders of a pioneering artistic colony at Big Sur, designer of the incredible stained-glass windows at SF's Masonic Temple Building, and a passionately open gay man living with a man for over 30 years. Combining intimate interviews with a host of friends, the film is art lesson, history trip and spiritual quest as Norman reveals his relationships with a younger generation of gay artists-in-residence. (10/14, Rafael; 10/15, Sequoia)

I Am One of the loveliest pure film experiences at Mill Valley is Dorota Kedzierzawska's hauntingly photographed saga of a young Polish boy's attempts to hide out in his pitifully poor small town. Eleven-year-old Kundel, cruelly nicknamed "Mongrel" by the pack of wild street-boys who relentlessly track him through desolate streets, has big ears, an unruly shock of blonde hair and the incubating soul of a poet. Played with enormous sensitivity by young Piotr Jagielski, Kundel is buffeted between an indolent, frequently inebriated young mother, an indifferent school system and a national culture that seems to embody a deeply fatalistic streak. A true poem to that cusp-of-puberty moment when boyhood turns into something truly terrifying, Jagielski's expressive face can shift in the flick of an eye from prankish boy to very old soul. (10/13, Sequoia; 10/15, Rafael)

Reporter Zero How soon they forget. It seems just yesterday that Randy Shilts was signing my copy of The Mayor of Castro Street, his riveting, warts-and-all biography of Harvey Milk that has yet to become a major motion picture. Randy himself is the subject of a minor but thorough portrait by filmmaker Carrie Lozano. In a brisk 25 minutes, Reporter Zero recalls Shilts' pioneering AIDS coverage for the San Francisco Chronicle and his book And the Band Played On, which documented the failure of every American institution designed to cope with a major public-health epidemic. Shilts, who appears in archival interviews, proudly pissed off many gay leaders in his crusade to close city bathhouses. One Chronicle colleague remembers sitting next to him on deadline at a major AIDS conference as hordes of spectators peered over his shoulder. "Randy, would you call off your fan club!" Towards the end of the film, an emaciated Shilts, at 41 bearing the gaunt look produced by wasting syndrome, remarked on the cruel irony he was facing.

"It's very frustrating, because here I am at the pinnacle of my career — I could literally do anything I wanted to in the world of journalism — and you're left with the strange feeling that your life is somehow finished without being completed." (Part of the Outside/In program, 10/6, 14, Throckmorton)

Between the Lines: India's Third Gender One of the best films you'll ever see about the subcontinent's intriguing, perplexing culture in respect to human sexuality. A female photographer's boundless curiosity about the ways of her country's eunuchs, the hijra, forms the core of a profoundly revealing exploration of a caste of biological males who identify as female and function as a bridge between what "real" men invariably want and what "real" women are brought up not to provide. Anita Khemka is forever snapping some terrific black-and-white photos and asking some very pushy, pertinent questions to her new friends: three hijra who approach their calling — dancing, begging and what we would call prostitution — from three different comfort zones. Khemka pesters each about their reasons for choosing or not choosing to be castrated, a question PC Americans would probably never think to ask. Produced and directed by Thomas Wartmann, the film benefits from cinematographer/editor Thomas Riedelsheimer's eye for finding beauty amidst squalor. A proper Brahmin couple's desire not to explore the lifestyle of their "dancer" son is treated with the same deference given the art of hijra street-begging. (10/13, Sequoia)

Full Grown Men This very grown-up comedy about men who find it hard to put away their toys is enhanced by a soulfully comic performance from the still underrated Matt McGrath (Boys Don't Cry). A physically lovely and openly gay performer who has earned the majority of his hosannas on-stage, McGrath has a knack for finding the humor and the sorrow in every living moment: there is great pain in those eyes, but nothing sloppy or unearned. Director David Munro's script (with Xander Castleton) wobbles a bit, but this portrait of an annoying kid turning into some kind of adult is well worth catching, particularly for a non-sentimental moment with a developmentally challenged and very talented actual kid. (10/7, Rafael; 10/15, Sequoia)