Summer camp with the Christian right 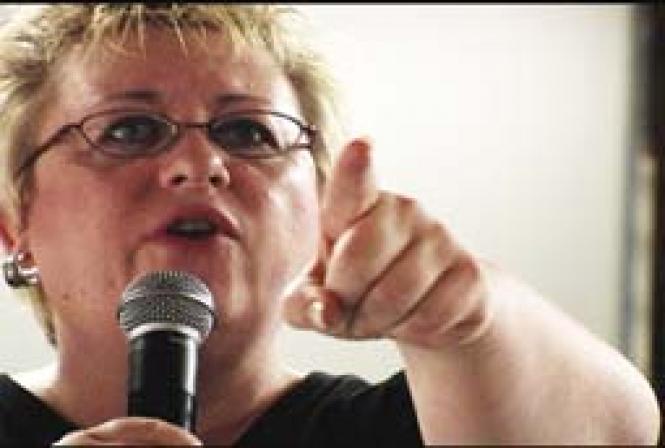 "Let me say something about Harry Potter: Warlocks are enemies of God! In the New Testament, Harry Potter would be put to death!" Ã¢â‚¬â€ Pastor Becky Fischer, director of Kids on Fire summer camp in Devil's Lake, North Dakota.

As with their first collaboration, the heartbreaking The Boys of Baraka, in Jesus Camp, filmmakers Heidi Ewing and Rachel Grady deliver a disturbing message about contemporary America through the eyes of children. While Baraka's four African American lads from a wretched ward in Baltimore found the nearest good school they could attend to be located in East Africa, the terribly earnest and mostly white urchins in Jesus Camp are home-schooled by parents who fear far worse than warlocks lurking in the public schools of even such a rock-ribbed community as St. Robert, Missouri.

One of the brilliant strokes in Jesus Camp is the deft way the filmmakers paint a disturbing picture about their subjects Ã¢â‚¬â€ charismatic parents and ministers trying to inoculate prepubescent children against the toxins of "godless liberalism" Ã¢â‚¬â€ without depicting them as crazy or irrational. Children pledge allegiance to "the Christian flag"; we hear a female pastor comparing Jesus Camp to Palestinian schools where "they put hand-grenades in the hands of children"; a mother with a wholesome smile and a freshly scrubbed kitchen beams at her home-schooled kids as she proclaims, "There are only two kinds of people in this world: those who love Jesus, and those who don't." The camera catches the family dog looking worried.

The principle dissenting voice comes, ironically, from a talk-show host. Mike Papantonio, a successful product-liability lawyer, uses his Ring of Fire call-in show on Air America to warn that the Christian right's main aim is not striking down abortion rights or gay marriage, but rather that most unique part of the American experiment.

"In the end, it is going to come like a thief in the night: there's a slow chipping away at separation of church and state." Papantonio, who bears an odd resemblance to the down-home character actor Harry Dean Stanton, is filmed in the almost pitch-black darkness of his radio studio as he warns that the Christian right "has captured the White House, the Congress and control of the judiciary for the next generation."

The real stars of Jesus Camp are Pastor Becky Fischer and her kids, including a precocious 12-year-old aspiring preacher named Levi who admits that Jesus is helping him overcome his natural shyness. "At five, I got saved just because I wanted more from life." Levi, the son of a pastor, sports a slightly retro look, a mullet tied back in a ponytail, as he practices his sermons for kids he's never met.

Becky Fischer is a large, energetic woman whose manner might be described as jolly until one notices the look in her eye. It's the look one would frequently observe in Shelley Winters in her trademark roles, as the wife of a crooked preacher who threatens her kids in Night of the Hunter, or the slightly dotty widow landlady who stands between Humbert Humbert and Lolita. As Becky bombs her spiky hair with a heavy dose of spray, she looks into a mirror muttering, "I get exhausted doing this."

A onetime child convert to Christ herself, Fischer believes if you get them early, you'll have them for life. Jesus Camp 's principal strategy is to jam so much activity into each summer day that kids have precious little energy for evil thoughts. The result is an anarchy of movement: kids speaking in tongues, rolling on the floor possessed by the spirit, dressed in body paint and flaying away with wooden swords Ã¢â‚¬â€ a cacophony that resembles a grade-school Burning Man.

The filmmakers slyly capture minor rumblings of dissent. One easygoing boy jokes with his friends over dinner: "My mom doesn't want me to watch the Harry Potter movies, but I watch them at my dad's." Another smaller boy, whose cherubic blonde locks and ruby red lips suggest he might grow into white America's perfect picture of Sunday School Jesus, confesses to his peers that he's struggling with his faith.

Levi's peak moment occurs at the mega-church of Ted Haggard. Pastor Haggard's still-boyish features have a tendency to fold into a meaner-than-Bush smirk. To his parishioners Haggard declaims, "We don't have to debate homosexuality. It's in the Bible!" In private, he takes a shine to Levi, and offers a disturbing piece of professional tutoring. "Use the cute-kid thing until you're 30."

Jesus Camp climaxes on the radio: Becky versus Mike Papantonio. Becky denies being overtly political after blessing a life-size cutout of Bush. Mike exclaims, "Why are we creating political soldiers for the Republican Party? It's a witch's brew. It's going to destroy itself."

The filmmakers leave Becky late at night, lost in thought, riding through a carwash. Because of a trick of lighting, Becky's car looks like it's getting cleansed in the blood of the lamb.