Under fire from the U.S. government 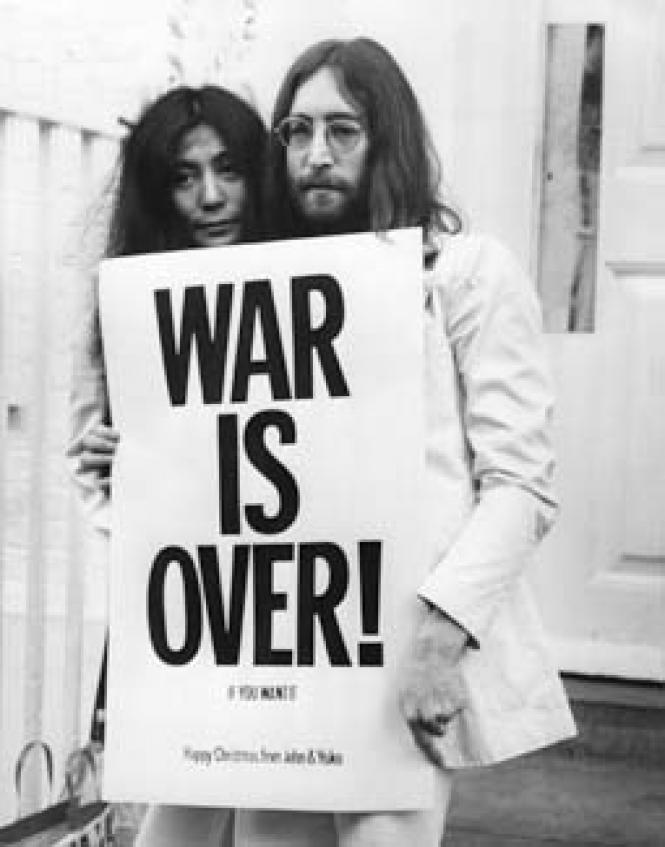 "The 60s weren't the answer, but they gave us a glimpse of the possibilities." — John Lennon.

"I remember walking up to a demonstrator, grabbing his wrist, and lighting my cigar with his candle — 'There, you're good for something!' That's the attitude we had towards them." — G. Gordon Liddy.

A new film hits theatres this week, a film that, like last week's disappointing All the King's Men, showcases a man of the people, a larger-than-life figure also gunned down in his prime. Unlike Huey P. Long, the late John Lennon didn't fancy himself a politician, but filmmakers David Leaf and John Scheinfeld argue that even before his assassination by a crazed fan, the ex-Beatle had been made a sort of political martyr by the dirty-tricks division of the Nixon Administration.

The U.S. vs. John Lennon spans the last dozen years of the singer/musician's life, from the time that Japanese performance artist Yoko Ono became a catalyst for the breakup of The Beatles and the dissolution of Lennon's songwriting partnership with Paul McCartney, through Lennon's murder outside the Dakota in New York. The filmmakers actually focus on three years (1969-72) when Lennon briefly entered the orbit of high-powered celebrity activists — Yippie Abbie Hoffman, actress Jane Fonda — media figurehead leaders for a huge grassroots movement against the war in Vietnam.

Beginning with John and Yoko's Dada-like, seven-day honeymoon in bed, the film chronicles the couple's sponsorship of "War Is Over" billboards in 11 major cities, Lennon's appearance at an outdoor concert that sprang Michigan marijuana activist John Sinclair from a sentence for selling two joints to an undercover narcotics cop, and Lennon's decision to cancel a proposed anti-war protest performance outside the 1972 Republican Convention in Miami. By May, 1972, the singer was spending most of his time fighting the government's attempt to deport him on the pretext of a long-ago British drug bust.

The film is artfully told through a series of breathless sound-bites from public personalities sympathetic to Lennon: ex-Nixon White House Counsel John Dean, tabloid TV reporter Geraldo Rivera, novelist Gore Vidal, Black Panther Party leader Bobby Seale. The only subject interviewed who takes pride in the government's attempt to silence Lennon is convicted Watergate conspirator G. Gordon Liddy, who practically twirls his mustache in glee as he dismisses Lennon as a spoiled rock star biting the hand that bought his records. "It was our perception of Lennon that most of the time he walked around stoned, but we kept an eye on him. Back in that time, the FBI engaged not just in intelligence [gathering], but openly acting against the other side." In contrast to Liddy, a former FBI agent somewhat sheepishly admits, "We were being used against political dissent."

The film is clearly pitched to an audience opposed to the Bush Administration's anti-terrorist wiretap campaign. The filmmakers never entirely explain why Nixon, a man with an enemies' list whose members could have filled the Kennedy Center, would waste his paranoia on an obvious political amateur like Lennon when he had the likes of Daniel Ellsberg to persecute. Reporter Rivera makes a plausible claim that with the recent lowering of the voting age to 18, maybe Nixon feared that Lennon's popularity with this unpredictable bloc of voters might be enough to turn the 1972 election.

On the minus side, The U.S. vs. John Lennon carefully avoids the dark side of Lennon's turbulent trip through the 1970s. It was a decade that would see him emerge as a major solo recording artist and a ballad-writer capable of attracting a Bob Dylan-like following, but also a decade in which he would interrupt his relationship with Yoko, acquire drug habits more disabling than pot, and experience a certain disequilibrium about the course of his life and career.

As a Beatle fan who never entirely recovered from his own paranoia about Yoko's "abduction" of John from the group, it was disconcerting to watch a film in which one of my own imagined enemies puts her spin on my hero, removing his warts and celebrating her power over this vital bit of pop history. For it is as a charismatic pop star, part of a band of guys who inspired guys to look at guys, that John Lennon's true legacy lies.

In light of our own preoccupation with the religious Right, it is amusing to note the early flap over Lennon's famous quip, while still a Beatle, that the Fab Four were more popular than Christ, with the resulting cries from the heartland that kids burn their Beatles records.

The film's most obvious asset is a splendid soundtrack containing dozens of songs from Lennon's solo career, from "Imagine" to "The Ballad of John and Yoko," with its irreverent chorus: "Christ, you know it ain't easy."