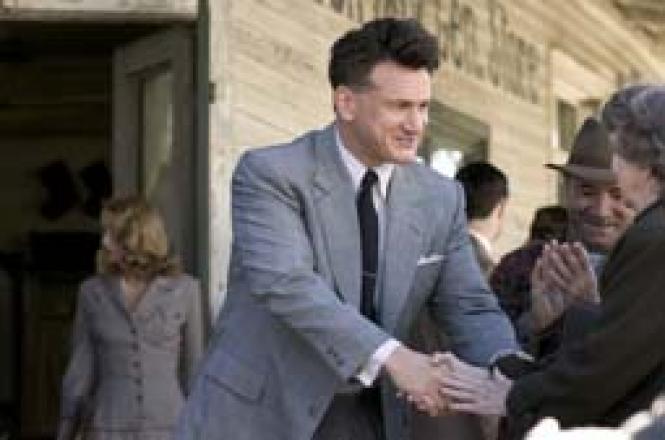 Sean Penn in All the King's Men
. Photo: Jon Farmer

Judge: "Pillsbury is guilty. As Attorney General of this state, it's my job to prosecute."

Willie Stark: "Judge, you talk like Pillsbury was human. He isn't, he's a thing. You don't prosecute an adding machine if a spring goes busted and makes a mistake. You fix it. Well, I fixed him." – from Robert Rossen's Oscar-winning 1949 film All the King's Men.

As a political junkie, I was looking forward to Steven Zaillian's new, improved version of the rise and predictable fall of Robert Penn Warren's irascible man of the people, Willie Stark. But an hour or so into this visually lovely but soul-dead remake, I started sinking down in my seat, first suppressing a yawn or two, then just giving into the fact that I couldn't wait for somebody to shoot Willie and set me free. How can a film shot in many of the actual places prowled by Willie (and in some instances built by the real-life Willie, the Kingfish, Huey P. Long), with an all-star cast and a writer/director who won an Oscar for writing Schindler's List, give us so little to savor and less to love?

This movie's creators were clearly drunk on poet Warren's language, and determined to correct some of the changes to the story wrought by Rossen in his vulgar but engrossing melodrama, which mixed film-noir style with the serviceable metaphors of a boxing film like his own Body and Soul. They were also determined to cast the two principal roles, Willie and his journalist shadow/mentor/hatchetman Jack Burden, with actors whose impeccable rÅ½sumÅ½s can't disguise that they are hideously wrong.

In the original, John Ireland as Burden narrates and plays a vital cog in a human machine constructed by Willie (a fast-talking lout with a heart, in a career turn by Broderick Crawford) that sweet-talks an unnamed state out of its votes and money so that Willie can crash the White House in record time. In the remake, Burden (an icy cool Jude Law — why not Ryan Gosling?) is too preoccupied with Willie's boorish hanky-panky with his ex-girlfriend and her dotty family to care that the guy is raping a whole state, the clearly and poignantly depicted state of pre-Katrina Louisiana.

Sean Penn works himself into a lather conjuring up Willie's stump speeches for the hicks that are all technique and no passion. Penn has been a bad guy (Mystic River), a wonderfully goofy guy (The Falcon and the Snowman ) and a vividly hideous loser guy (The Assassination of Richard Nixon), but has he ever played a guy with a heart who could seduce you into believing he cared about ordinary folks? He's played one of those folks (an incendiary debut as the feral son of a vicious outlaw in At Close Range ), but as a boss guy, he's not a seducer. You're always aware that a pit bull lurks behind those unsmiling eyes. In real life, Penn (as lovingly captured by Spike Lee) has fished people out of the drink after Katrina, wrestled with his feelings over Iraq, and chain-smoked through a heartfelt TV tribute to his hero, Brando. But the charming rogue who's also demagogue and devil are not lurking in his bag of tricks. Ironically, Penn plays a few early scenes against an actor born to play Willie: The Sopranos' James Gandolfini, whom the filmmakers waste as a small-time operator assigned to con Willie into helping them split the hick vote.

It's odd that a film with time for an ice-skater to flaunt her tush doesn't have time for politics. If there's anything wrong with what Willie is doing, the filmmakers are as mum about it as Katie Couric on her news-free newscast.

All the King's Men makes me fear not for the Republic, but for the future of political movies. I can imagine a similarly misguided stab at bringing Harvey Milk to the screen.

Since the filmmakers were so besotted by Warren's prose, here's a chunk of Burden advising the novel's Willie on how to fool all the people all of the time.

"Hell, make em cry, make em laugh, make em think you're their weak, erring pal, or make em think you're God Almighty. Or make em mad. They aren't alive, most of em, and haven't been alive in 20 years. It's up to you to give em something to stir em up and make em feel alive again. That's what they come for. Tell em anything. But Sweet Jesus' sake, don't try to improve their minds."