Back to Heather land 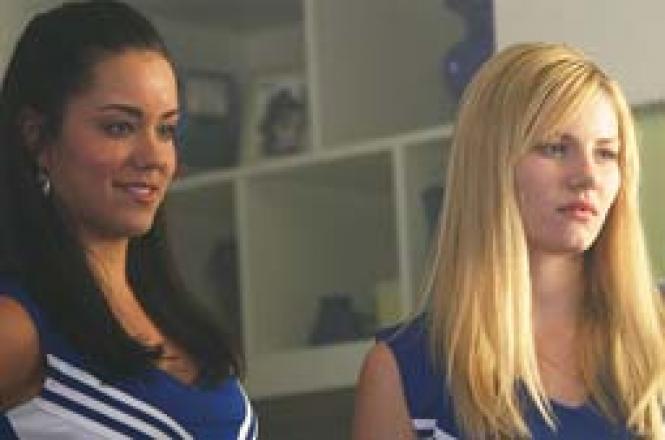 "Ted Field told me he only has one nut. I think that's disgusting!"

"There's only one way to find out."

In The Quiet, a domestic thriller from director/writer Jamie Babbit (But I'm a Cheerleader), high school coeds swear the way longshoremen were once supposed to. The new girl in school is deaf, the butt of vicious putdowns, but oddly enough, also the one person to whom a lot of people in the movie find themselves disclosing their darkest secrets. The popular girls have zeroed in on the school jock, who in turn will become science-lab, and later sodomy partners with the deaf girl. One girl's mom juggles home decoration schemes with plans for a complete mental collapse; and the town's squarest-appearing dad seems primed for a very big fall.

The Quiet is so packed to the brim with a minefield of edgy plotlines that one can almost imagine it to be the pilot show for what the FX network might consider an NC-17 remake of the WB's Popular. Only by the time the closing credits roll and they're previewing next week's episode, all the lead characters are dead! If the writing is at times overwrought, the casting choices are so well-honed that by film's end, when somebody is slipping into a squad car, we're sort of happy to have been along for the ride.

As in Babbit's first film, the one-joke spoof of homosexual re-education programs, the heroine of The Quiet is also a popular cheerleader named Nina (Elisha Cuthbert). Every day at lunch, Nina and her best friend, Michelle (Katy Mixon), dish the school lunchroom crowd as if they were auditioning for Jerry Springer. No boy with even one nut to his name escapes a rating for his possible sexual prowess.

Meanwhile, Nina's architect dad (Martin Donovan) has saddled her with the ultimate popularity-defying challenge of sharing her home with a deaf girl, Dot (Camilia Belle). Dot is the daughter of the deceased best friend of Nina's mom (Edie Falco). Mom is caught up with a home decoration scheme that seems to have permanently replaced sex with Dad.

Each character walks around as if her head were about to explode, while Babbit tries to throw us off the scent of the film's incest theme by giving Dot a series of interior monologues that suggest that it's her meltdown we're awaiting, while the girl actually about to pop her buttons is, of course, the blonde Nina. Nina alternates between pseudo-bitchy and faux-nice, and is the kind of girl whose cell phone calls are so X-rated you can sympathize with Mayor Bloomberg wanting the beastly devices banned from Big Apple schools.

After graduating from the Hal Hartley academy of small films devoted to desperate living on Long Island, Martin Donovan has mostly played the handsome but untrustworthy guy — the kind who would smilingly place the pods in his best friends' basements in another remake of Invasion of the Body Snatchers. Donovan, who was so cool as the put-upon gay widow whose slutty half-sister steals his dead lover's ashes in The Opposite of Sex, is here called upon to be the creepiest possible Dad. Bless his heart, he goes down with the ship, leaving only dazed survivors: a martyred wife and a possible lesbian couple in the making.

The Quiet may be a mess, but it's an exceedingly entertaining one, with a host of fine actors keeping their characters on as tight a leash as a film heading for this particular kind of crash landing allows. Babbit has had a nice television-financed learning curve since Cheerleader, and displays a credible command of tone and filmic transitions. Plus, one is never bored when the likes of Donovan and Falco get to duel around the dinner table: "Don't contradict me just to contradict me." There's also a scene of Donovan giving the fish eye to a busybody guidance counselor that's like an outtake from Donnie Darko, and almost as much naughty fun as the trooper who goes up in smoke opening the car trunk that should never be opened in Repo Man .