Sons of the Grand Old Party 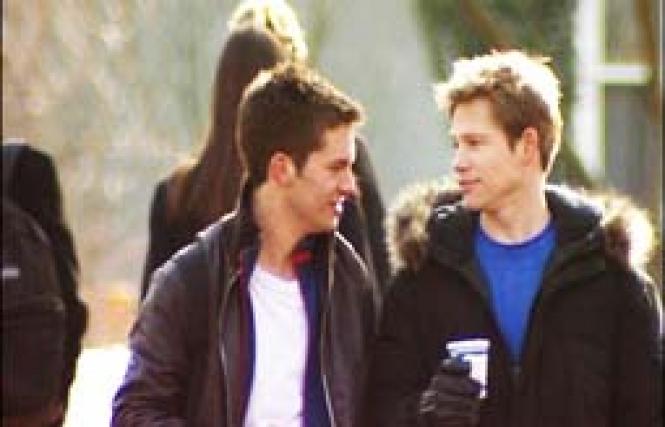 Henry Kray, the closeted gay son of a powerful politician in the film Poster Boy, panics when asked to introduce his dad at a campaign event at Henry's New York City college. Henry flees to the family's California summerhouse. Dad sends out the hounds: Skip (Ian Reed Kesler), the ass-kissing president of the campus Young Republicans club.

"I don't believe this. What did he promise you to get you to come out here?"

Henry slams the door in Skip's face. Skip says through the door, "You might as well let me in, or I will tell your father you're a fag!"

A terrifically conceived political/sexual melodrama, Poster Boy is a Log Cabin Republican nightmare or wet dream: the outing of the son of a conservative senator from North Carolina. Director Zak Tucker delivers a quirky, stylized video approach (from a script by Lecia Rosenthal and Ryan Shiraki) that simulates the off-kilter feeling of one of those black-box theatre plays where you're practically rubbing elbows with the actors.

Act One opens as Henry (Matt Newton, sensational as the impulsive, conflicted young man) is telling a seasoned political reporter the tale of how he screwed his father by kissing a cute trick on the same podium dad was using to opine about "compassionate conservatism." Henry is a ticking bomb on a short fuse. He explains at one point how the only time he didn't feel a prisoner in a political cage is when he was sucking cock in a public restroom. Only then could he believe that he wasn't merely the Senator's son.

Newton's appeal is bolstered by a compelling ensemble: Michael Lerner (he was a regal Louis B. Mayer opposite John Turturro in the Coen Brothers' wacky Hollywood spoof Barton Fink; and recently, the irascible gallery owner touting an accused serial killer artist in Art School Confidential) as the crafty/bullying Senator Jack Kray. With this guy, the wheels are always turning, and everything is politics. Karen Allen is sharp and saucy as the Senator's long-suffering wife who's finally developing some backbone; and Jack Noseworthy is sublime as Anthony, the ACT UP trick from hell, the one guy who doesn't observe Henry's one-night-stand rule.

While the oddly paced and lit video and the framing device of the reporter's interview at first distance us from the story's real heat, gradually all the pieces click into place, and the result is more vivid than the usual well-shot film about politics. This is one of the rare cases where a film actually benefits from its digital video origins: an especially well-shot moment has Henry emptying his pockets as he speeds madly through the empty summer house to jump fully clothed into the family pool. His splash leaves beads of water on the camera lens. Instead of reading as a mistake, the shot brings us closer to a character who's part tortured idealist and part crafty dissembler, just like dad. An almost Larry Clark moment has Henry buy a female hooker for Skip, after dragging Skip to a gay dance club and realizing he's a hetero virgin.

Caution: this low-budget production has a couple of obvious continuity glitches, and the director's preference for boyishly handsome actors with reddish brown hair may cause some audience members to get confused as to which cute boy is which. But patience will be rewarded.

A subplot involving Anthony's AIDS-diagnosed female roommate Izzie (Valerie Geffner) may seem like a bit of a time capsule, especially with the early 1990s salutation, "Love you. Mean it."

Originally designed as a Primary Colors -like piece for the late Herbert Ross, the production was scaled back (with Newton inheriting a lead slated for Billy Crudup), but the message about the treacherous treatment the queer cause receives from both the left and the right is, if anything, emphasized by the experimental nature of its delivery. Both young leads are far sexier than the program photo indicates; Kessler and Noseworthy radiate an easy intimacy suggesting two young men who find themselves yoked into a situation that is far messier emotionally than either had bargained on. Newton gives a very nuanced take on a character growing and changing before our eyes, and Noseworthy is nifty as a kind of Kevin Bacon-like trickster. Not to be missed.