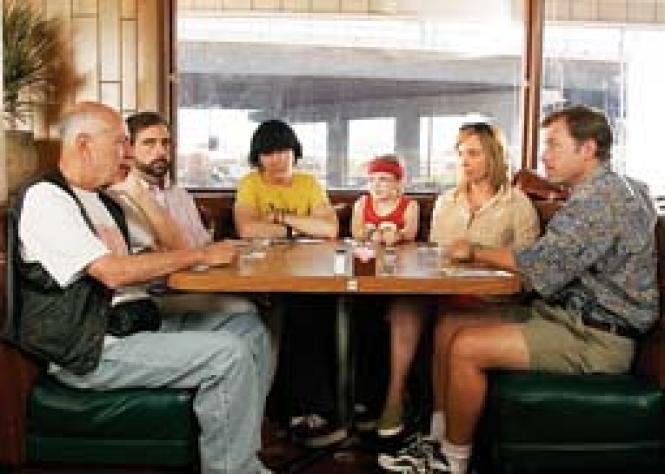 In the first act of the new screwball family comedy Little Miss Sunshine, an overworked and financially stressed mother, Sheryl (Toni Collette), takes time out from overseeing a success-challenged husband (Greg Kinnear), a teenage son who's taken a vow of silence in honor of Frederick Nietzsche (Paul Dano), a father-in-law who's been kicked out of a senior home for snorting heroin and chasing skirts (Alan Arkin), and a seven-year-old borderline-hyperactive daughter who dreams of becoming a prepubescent beauty queen (Abigail Breslin), to comfort her college-professor gay brother, Frank (Steve Carell), who tried to kill himself after his affair with a male graduate student was sabotaged by a rival Proust scholar.

Entering Frank's hospital room, Sheryl observes her cuckolded sibling staring morosely out the window. In moments like this, what does one say?

Michael Arndt's witty script, deliciously mounted by the husband/wife first-time directing team of Jonathan Dayton and Valerie Faris, showcases an eccentric extended American family where the problems of a suicidal adult gay man don't seem especially unusual. In 1938, Frank Capra won an Oscar for sending up the eccentricities of a family of lovable oddballs whose mission it was to adopt the son of an unscrupulous rich family. You Can't Take It With You was a valentine to one clan's refusal to knuckle under to The Great Depression. Seven decades later, Little Miss Sunshine highlights what it's like to live in an America where completely unobtainable standards for success create millions of little depressions.

Frank, who drops into the Hoover clan expecting to wallow in his absurdist romantic/career meltdown, finds that he's been assigned a roommate who is two decades younger, yet twice as miserable. Dwayne, 15, has set himself the goal of becoming a fighter pilot, vowing not to speak until he's accepted into the Air Force Academy. As portrayed by the dramatically nimble Paul Dano (L.I.E.), Dwayne looks like he really wants to join a heretical monastic order, a look reinforced by a yellow T-shirt reading "Jesus Was Wrong." His large skull is decorated by a severely dyed mop of black hair, at times giving him the appearance of having no eyebrows.

Steve Carell, who delighted as the emotionally castrated, straight, libido-challenged 40-Year-Old Virgin, here portrays the dyspepsia of a gay man who has been bested, academically and erotically, by the same slimy rival. This he channels into becoming a sort of guru for a troubled younger man. A marvelous moment has Frank informing Dwayne why he should consider switching literary gods, trading Nietzsche in for the brilliant, gay shut-in Marcel Proust, "whose greatest work no one reads anymore."

Carell, whose bearded countenance might mask the psyche of an ax murderer as easily as a literary scholar, is lovely to watch during a convenience store scene where he's ambushed in the act of buying girlie magazines (for Arkin's risibly lecherous Grandpa) by the same fickle ex-boyfriend who drove him to attempt suicide.

The sunshine of the title falls to the film's doggedly upbeat and oddest couple: Abigail Breslin's emotionally volatile Olive, whose reaction to the news that she's in the beauty contest is a high-pitched squeal that could shatter glass, and veteran Alan Arkin's full-throttle impersonation of the least cuddly senior citizen since the grouchy-old-guy swan songs of Walter Matthau and Jack Lemmon.

The movie hearkens back to the best of 1970s comedies like Michael Ritchie's Smile. In Smile, Ritchie sent up a Young Miss Beauty contest that bears a startling resemblance to Sunshine's obscene incentives to get seven-year-olds to mimic Vegas showgirls. In Smile, Bruce Dern played a ruthless car-dealer whose outlandish drive to succeed was similar to the more obviously pathetic motivational speaker here embodied with such loving nonjudgmental care by Greg Kinnear. Smile demonstrated the explosion of the American Dream. Sunshine shows sad survivors clinging to the pieces as if they could be traded in to some cosmic eBay for the ticket to a very elusive happiness.

In the film's literal running gag, family members have to jump-start their day-glo-yellow VW bus' stripped-out gear shift, then leap into the van like hobos hopping a slow freight train. The maneuver puts the gay character onto the same treadmill to oblivion as everyone else, embodied in the movie's tagline, "Everybody pretend to be normal."