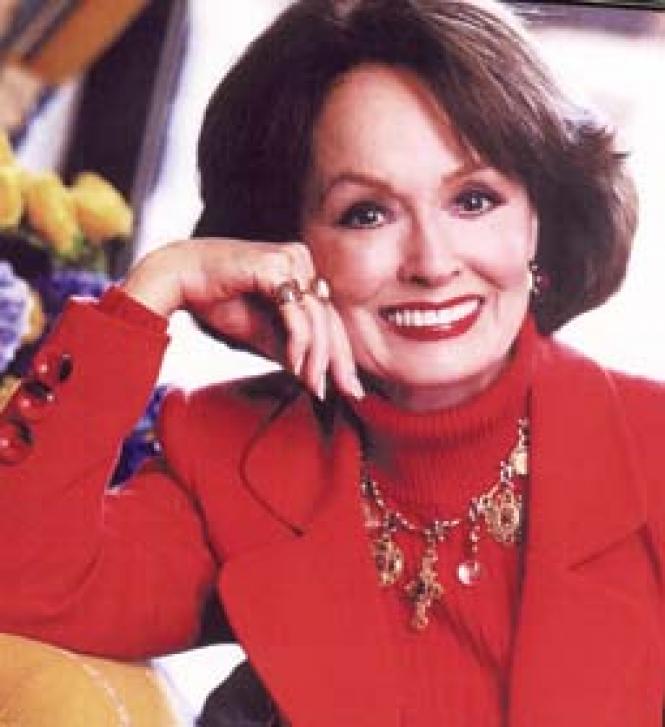 Ann Blyth (b. 1928) starred in 32 movies in 15 years, opposite Bing Crosby, Robert Mitchum, Burt Lancaster, Claudette Colbert, Gregory Peck, and Paul Newman, among others. She made comedies, melodramas, musicals, and biographies, and was under long-term contract to Universal Studios and MGM. Yet she's best remembered for Veda, Joan Crawford's vile daughter in Mildred Pierce (1945), a performance that earned a Best Supporting Oscar nomination, and which she will discuss in person at the Castro Theatre on Friday evening, July 21. Blyth will be interviewed on stage by local film noir expert Eddie Muller. Her appearance is another of Marc Huestis' legendary events and will include a showing of the classic film, a tribute to Blyth introduced by Jan Wahl, and special appearances by Juanita More, Heklina, and Matthew Martin.

We recently spoke about her career. Born in Mount Kisco, New York, her parents divorced when she was a tot, and her mother moved Ann and her sister to Manhattan. At five, Blyth successfully auditioned for a children's radio program but, despite what sources say, didn't train at the San Carlo Opera Company. "That's a mistake. I played street urchins in their productions of Carmen and La Boheme, which instilled my lifetime love of opera."

While she attended the Professional Children's School, someone recommended her to playwright Lillian Hellman and producer Herman Shumlin, who were casting Babette in Watch on the Rhine (41). "I was having lunch in the cafeteria, and they came to look at me. Later, I read in Mr. Shumlin's office. I got the part." After an 11-month Broadway run, she toured, and while in Los Angeles, was signed by Universal. She made several minor musicals, often co-starring Donald O'Connor. Was she disappointed at not repeating her role in the movie version of Rhine? "Not really. It wasn't that important."

Was she aware Shirley Temple was also considered for Veda? "No. I found out much later. All I knew was that lots of young actresses tested. But director Michael Curtiz told me, in his wonderful Hungarian accent, 'Don't vorry, Annie. You haff de part.'" The role is "outstanding. Even today, when I get mail, people mention it."

Did she know how important the film was to Crawford? "Yes. Everyone knew. But I never saw her edgy or nervous. She was very kind. Very beautiful. Always exquisitely dressed. Her professionalism was stunning." After shooting ended, they remained friends. "I seriously injured my back. One of the few things I was allowed to do was swim. Joan let me use her pool throughout my recovery." She never knew anyone "who enjoyed being a star more than Joan." What about Christina Crawford's accusations of child abuse? "They contain lots of exaggerations. It makes me sad that anyone could be so hurtful."

She also praised Mildred Pierce co-star Eve Arden. "Delightful. A standout. Bright and funny." Was it true Colbert would only be photographed from one side in profile? "I think so. Like Joan, she knew a great deal about lighting, and always made sure she looked her best. She was very nice." Mitchum was a favorite. "I loved Bob. He was a big man, with boyish charm. And an underrated actor. He's so frightening in the original Cape Fear, which is much better than the remake." Crosby was more difficult. "You never knew what mood he'd be in. But he could be fun, he had his moments. And he treated me well."

In Vincente Minnelli's Kismet (55), Blyth sang "Baubles, Bangles, and Beads" beautifully, but despite terrific co-stars Howard Keel, Dolores Gray, and Vic Damone, the film was poor. Minnelli was battling MGM. "He was there and not there. Didn't seem engaged. It was a difficult time for him. And he didn't finish the movie — Richard Thorpe did, without credit. It was disappointing." Yet she liked the old studio system. "I felt very protected. But it wasn't good for everyone. MGM treated Judy [Garland] badly. She was so talented and funny. It really is a shame."

Her last film was at Warners, The Helen Morgan Story (57). Why did Gogi Grant dub her singing? "I don't know the full story. It seems so ridiculous. Helen had a soprano voice, but it was a very small voice. Perhaps Jack Warner thought no one would remember how she actually sounded." Newman co-starred. Did she think he was destined for superstardom? "Without a doubt!"

Did she regret not getting a particular part? "The Three Faces of Eve (57). I was considered for it. But it turned out beautifully with Joanne Woodward, who won an Oscar."

In 1953, Blyth married Dr. James McNulty. They had five children and are still wed. How did she find personal happiness despite the pressures of movie stardom? "I picked the right man. He has a great sense of humor, and has always been very supportive." She credits her mother for the values "to keep sane" amidst Hollywood's madness. What did her children think when they saw her onscreen? "It didn't make much difference, which is what I wanted. But now I think they have a better understanding."

She worked regularly on television until the 1980s, including appearances on Quincy and Murder, She Wrote, with fellow MGM alumna Angela Lansbury. She also worked steadily on stage, starring in shows like The King and I and The Sound of Music. She's looking forward to the tribute at the Castro Theatre. "My husband and some friends will be coming with me. It will be fun."