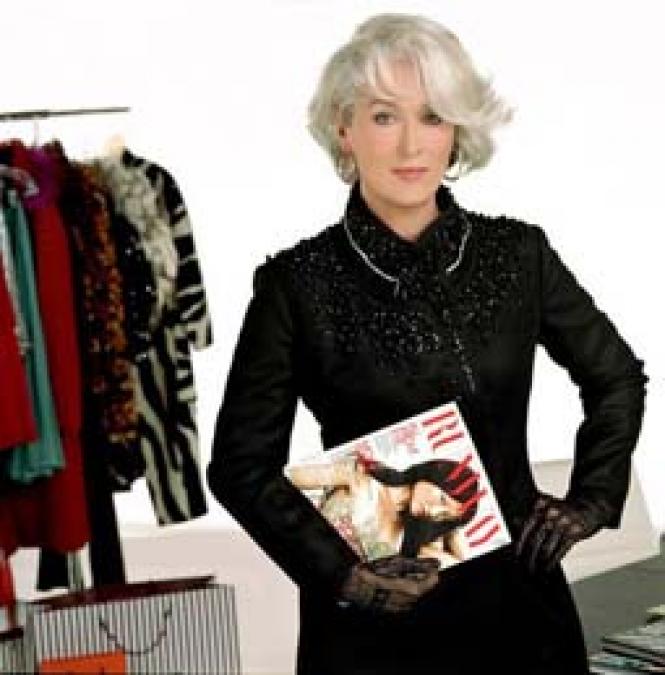 Meryl Streep, married to the same man for 27 years and the mother of four beautiful kids, is the world's most Oscar-nominated actor, with 13 nominations and two wins. She's also one of this year's busiest actresses.

Streep, 57, is currently on screen in Robert Altman's A Prairie Home Companion. She gave her voice to The Ant Bully, an animated film which Warner Bros. will release in August. Reflecting on her role as Queen Ant, she laughed, "It's fun playing a Queen." And she plays bitchy boss Miranda Priestly in The Devil Wears Prada, the summer's funniest movie. Streep has done comedy before, but never this spectacularly.

In Prada, she plays a role which many assume is based on Vogue editor Anna Wintour. During summer 2003, The Devil Wears Prada became the novel to read, especially if you worked for a bitchy boss. The book was written by Laura Weisberger, who once worked as Wintour's assistant.

Streep and her two assistants in Prada Ã¢â‚¬â€ Anne Hathaway, the only major player in Brokeback Mountain to be robbed of an Oscar nomination; and Emily Blunt, half of the lesbian couple from last year's My Summer of Love Ã¢â‚¬â€ are all Oscar-worthy. It's been four years since Streep's last nomination, for Adaptation. She is due.

For 30 years, Streep has transformed herself into whatever character she is portraying on film, living life as they would, in just about every aspect of the word. Playing Polish Jew Sophie Zawistowski, who must choose between the life of her toddler daughter or son at a concentration camp in her Oscar-winning Sophie's Choice, Streep learned Polish and spoke it so convincingly, many in the town where the movie was being filmed thought she was Polish.

"I am being paid to do a job every time I sign on that contract line," said Streep during a recent publicity tour. "I have tried to do it to the best of my ability since Day One. If I accept a role, I don't go into it half-assed. If I'm not confident that I can portray the character perfectly on screen, I won't even try. If a script is polished and the character is intriguing, somewhat challenging, and fully developed, and the team working on the film are all professionals, what is there to lose?"

Streep was nominated for Best Actress in 2000 for Music of the Heart, a role she stole right out from under Madonna. "I didn't steal anything," she laughed. "I was asked if I was interested in the role, and after reading the script, I was sold. I didn't even know Madonna had any interest in the role."

She doesn't often do publicity. "Enough people write about me every day without even interviewing me. If I am not the lead actor in a film, or if the film doesn't need my help, I don't feel the need to steal the thunder away from everyone else involved."

Streep is not a Hollywood woman by any stretch of the imagination. Nor is she even remotely a bitch like her character Miranda Priestly can be. She's one of the most down-to-earth famous people I've ever encountered. Neither does Streep care much about fashion, the religion of Miranda Priestly. But you'd never know it when you see Streep on screen, clip-clopping around in her Jimmy Choos or Manolos, or wearing a Prada bag draped across her shoulder.

"I had a blast stepping into Miranda's shoes, literally," she laughed. "But I couldn't care less about fashion to the degree Miranda does. We finished filming right after Hurricane Katrina, and Anne [Hathaway] had the great idea that we donate all of the clothes from the set to a charity auction. Not only does the money from the auction go to people who really need it, but those clothes went to people who would wear them. If I'd taken any home, they would have remained in my closet for the rest of their existence."

As Miranda Priestly would say, "That's all."