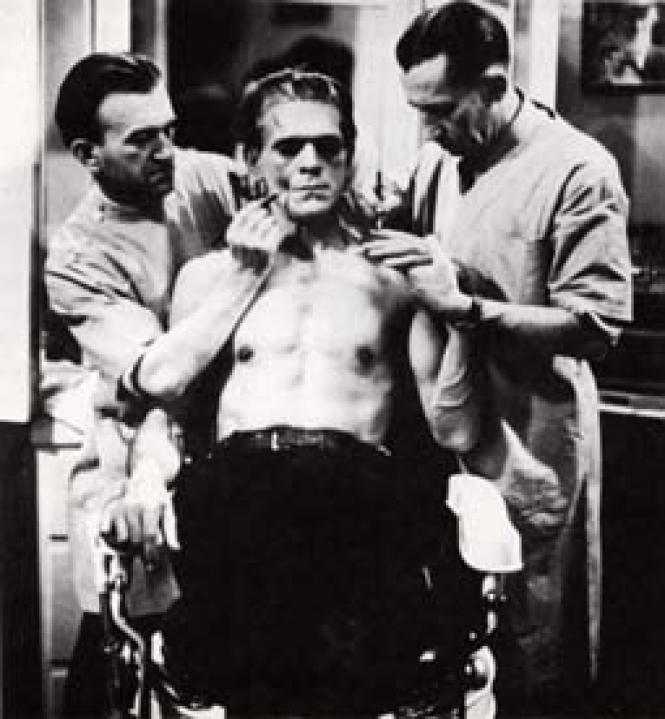 When Boris Karloff (1887-1969) became an "overnight" star in 1931, he was already 44 years old, had appeared in 81 films, and was a seasoned stage actor. The film that made his reputation was, of course, director James Whale's Frankenstein. Even 75 years later, Karloff's portrayal of the Monster remains the most sympathetic, nuanced performance in horror film history. More than just a grunting, killing machine, Karloff's Monster was a sad, frightened child, trapped in a powerful, 7-foot-tall body.

Karloff and Whale collaborated on creating this character. The then-closeted Whale (1889-1957), who in 1943 became Hollywood's first director blacklisted for coming out, molded the monster to reflect his own unhappy memories of being a gay youth in Edwardian England. Karloff's magnificent talent gave Whale's vision a dimension not even the director himself expected.

Until his death in 1969, Karloff was the undisputed King of Horror. He appeared in dozens of films, and became a brand name. His last name alone could fill a theatre. Now a classic theatre pays tribute to this still highly regarded classic star. The Balboa Theatre, on Balboa St. at 37th Ave. in SF's Richmond District, may not be as ornate as the Castro Theatre, but it's a lovely Art Deco neighborhood house in its own right, operating since 1937. The Balboa's original lobby and marquee remain intact. The theatre provides an old-fashioned environment in which to view a classic film.

Starting June 2, the Balboa will host a three-week tribute to Karloff the Uncanny, as he was billed in 1932's The Mummy . The Balboa's Gary Meyer promises 35mm prints of all titles, some not available on VHS or DVD. Enjoy Karloff's other Whale collaborations, the more blatantly gay The Old Dark House (1932) and Bride of Frankenstein (1935). In both films, Karloff played against out gay actor Ernest Thesiger (1879-1961).

The Balboa's festival is also a wonderful chance to see how versatile an actor Karloff was. In the rarely screened The Criminal Code (1931), his last pre-Frankenstein role, Karloff mesmerizes as a career criminal seeking revenge on those who sent him "up the river." One can see a monster in the making in this terrifying performance.

Karloff could also play comedy, as witnessed in The Secret Life of Walter Mitty (1947), a farce in which he supported closeted actor Danny Kaye. Nor was he afraid to spoof his own image, as in The Boogie Man Will Get You (1942).

Karloff's chief rival was Bela Lugosi, who had become a star first, in Dracula (1931), but was eclipsed by Karloff later that same year. It's said that a friendly "animosity" existed between the two, that Lugosi resented Karloff's brighter star. Watch their co-star vehicles, The Black Cat (1934), The Raven (1935) and The Invisible Ray (1936), and see if you can pick up on the off-screen tension between them.

Also included among the fest's 22 films are a sage, older Karloff, one year before his death, in Peter Bogdanovich's brilliant Targets (1968). As aging horror star Byron Orloff, Karloff essentially plays himself, and realizes that he can no longer compete with the real-life horrors going on in a strange, violent new world. The film is co-billed with Bill Condon's Oscar-winning Gods and Monsters, a James Whale biopic which focuses in part on the making of Bride of Frankenstein.

Meet Karloff's daughter Sara Karloff for a gala opening night on June 2. This charming former SF resident will share her memories of Dad and screen home movies. Meyer promises that Ms. Karloff will make further appearances throughout the festival.

For a complete schedule, visit BalboaMovies.com or pick up a program guide in the Balboa lobby.