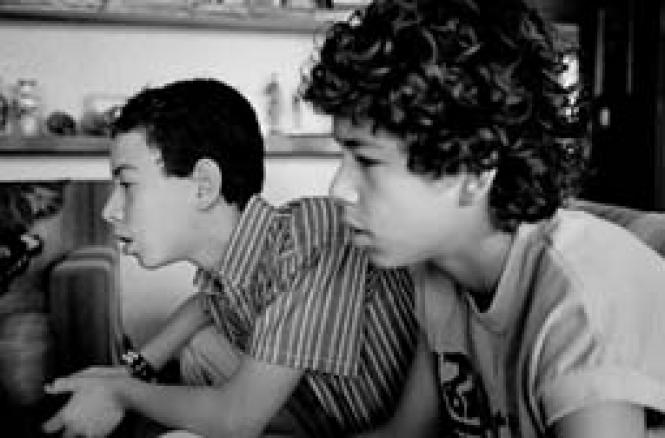 A scene from Duck Season: goodbye to parental guidance.

"I'll be bin Laden, you be Bush." Flama (Daniel Miranda) and Moko (Diego Catano) are 14, best friends and having the time of their lives. In Duck Season, the boys have bid adieu to Flama's worrywart mom. She's left them in an eighth floor apartment of a modest Mexico City high-rise, with instructions for not blowing up the kitchen and 200 pesos for pizza and two large Cokes. It's 11 o'clock on a summer Sunday morning, and there's no school, church or grown-ups to spoil a hard day's night playing terrorist videogames.

Duck Season (Temporada de Patos), now playing in area theaters, is first-time director Fernando Eimbcke's comedic fable about the unexpected results when a teenage TV- and soda pop-centered Nirvana collides with the agendas of unexpected visitors, the disaster of interrupted electricity, and raging hormones. There's a delectably unspoiled aura around Flama and Moko's unbridled passion for American pop-culture icons, including the invaluable lesson the boys offer on how to pour a fizzy Coke without spilling a precious drop: use the "Finger."

Eimbcke deftly unspools his back-stories. Flama's pissed about his parents' messy divorce. The adults squabble over kitschy honeymoon knickknacks, including an oddly hypnotic painting of ducks flying over a rural lake. Moko has the hots for Flama, the first hint of which comes as he slyly cops a peek of his friend dressing for their playtime, quickly diverting attention from his passion by a macho aside: "Hey, asshole, I'm sitting here, and you haven't said hi."

As in the more erotically combustible Y Tu Mama Tambien, it takes an older female to kick-start the boys. Rita (Danny Perea) is a very astute 16-year-old neighbor who knocks on Flama's door asking to borrow the oven to bake a cake. The motivation for her baking and her choice of ingredients will lead to more than the rise of batter.

Duck Season's impromptu instant family is rounded out by the world's most inept pizza-delivery guy. Ulises (Enrique Arreola) is a bruised and battered casualty of the Latin American matriarchy who's traded the dreams of being a vet for the surreal fate of euthanizing stray dogs and the indignity of being stiffed for his pizza by bratty teens.

Eimbcke avoids the pitfall of boring the audience with the boredom so brilliantly mimed by his actors, by letting odd bits of business and body language prompt unexpected behavior and character revelations. Some of the behavior would, in another movie, be downright icky and theatre-emptying. A long shot of the four characters hypnotically zoning out is punctuated by the sight and sound of Flama's intense nail-chewing and spitting onto his mom's carpet.

Alex Zabe's black-and-white photography, executed in a mesmerizing series of long-duration master shots, ices down our expectations for MTV-maniacal camerawork. It also hides a key physical trait that prompts an amusing bit of soul-searching over a family album.

Eimbcke has cast for great faces: Arreola, technically the only adult in the room, uses the skills of a classic clown to play a jester, to inform the boys of the deeper satisfactions to be derived from not paying for your pizza; Miranda projects the shifty insolence of the cool teen who hides deeper passions behind sexy, hooded eyes; Catano is the inciter, the little imp who can lie with a straight face and yet know when to play or fold the cards he's been given; and Perea keeps her life-of-the-party girl concealed behind a placid facade.

American viewers, unsure what school of comedy they're attending for 85 languid minutes, should probably tune their laugh reflexes somewhere between Jim Jarmusch's Stranger than Paradise and Richard Linklater's Slacker.

Director Eimbcke notes the inspiration for this poker-faced comedy was a day from his childhood when the lights went out. "None of us knew what to do and, without realizing it, we started to talk and tell stories. After several hours without electricity, we ended up singing."

Duck Season joins a growing body of Latin teen-slacker films, like the drolly funny 25 Watts about three lazy boys enduring the dog days in Montevideo, Uruguay. This little gem of a movie, about finding your passion when the lights go out, will leave you with memories of life's tiny, sweet moments: a boy reaching for a buddy's hand, a girl who finds a make-believe family to celebrate her birthday, and a grown man finding solace lying naked in a stranger's tub, knowing that the ducks will fly if you just stare at them long enough.