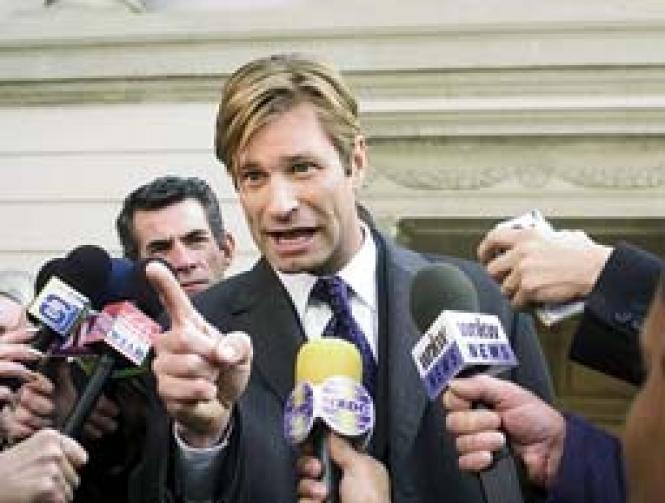 Aaron Eckhart in Thank You for Smoking. Photo: Dale Robinette

"Few people on this planet know what it's like to be truly despised." Actor Aaron Eckhart knows. After playing a human weasel to perfection in the dark comedy In the Company of Men, the South Bay native confided to me how much he enjoyed people thinking he really was that guy. "People would come out of the theatre and would be like, 'You're a prick! You're not really like that, are you?' And I'd be like, 'Of course I am.' Throw them off the path." Eckhart's blonde good looks came out of the Jello mold just a tad askew, allowing him to escape the burden of Robert Redford-style cinema uplift.

In the dark satire Thank You for Smoking (directed by Jason Reitman, based on Christopher Buckley's novel), Eckhart is Nick Naylor, a tobacco lobbyist whom an investigative reporter labels "a mass murderer, bloodsucker, pimp, profiteer, and my personal favorite, yuppie Mephistopheles."

It's the oldest trick in the book to have the leading character of a satirical movie be a person of hilariously dubious principles, a person so foul that their only excuse for living is to sugar-coat the author's message. Thank You for Smoking isn't out to get you to quit smoking. No, all movies have one aim in mind: like smoking, it's the temporary banishment of the only true sin in America, boredom. I'm happy to report that Thank You for Smoking is 92 boredom-free minutes.

The movie's message is that America is drowning, not in secondhand smoke, but in spin. There's hardly a character in the film not working fulltime to massage the truth Ã¢â‚¬â€ to win votes/market share, get sex, or advance their bloody careers, preferably all three.

Some satires are so overtly nihilistic that their only possible outcome is the destruction of the world as we know it, such as The Loved One, or Dr. Strangelove. Smoking, filmed like a lost episode of HBO's Six Feet Under, pulls back before throwing its characters and audience irretrievably over a cliff.

Nick Naylor's only attachments are his job, his daily lunch-buddies (The Mod Squad, "merchants of death" lobbyist shills for the liquor and firearms industries) and his son just on the brink of puberty, Joey (Cameron Bright).

A satire can come boringly undone at just the hint of sweetness or, God forbid, sentimentality on the part of the bloodthirsty, only-out-for-himself lead. So when we learn that Nick really cares about Joey and values the kid's opinion of his huckster dad, it's almost a little creepy. But then Joey seems like a shark-in-training kid, so it's okay.

Joey seems to possess a perverse gene for the right brutal response to torpedo your opponent's argument, especially if the opponent is his overly protective mom, already sleeping with a mushy-minded boyfriend. Early in the movie, Nick challenges the kid to debate which flavor of ice cream is best. Joey's appeal for chocolate is blindsided by dad's unscrupulous arguments on behalf of vanilla. A father/son duo licking vanilla cones on top of a speeding roller coaster could be the movie's logo.

A nifty supporting cast delivers the savage hand-grenade, quality one-liners with a ferocious believability. Katie Holmes' crusading reporter Heather Holloway insinuates her way into Nick's schedule and hotel bed with a Catholic schoolgirl's guileless charm and a grown woman's appetite for titillating sleaze. "I want to fuck you while I watch you on TV."

Reportedly, the Holmes/Eckhart sex scenes were trimmed at the request of Tom Cruise, although you might think the star would be more concerned with the traces of his supposedly ruthless persona that crop up in Rob Lowe's crass super-agent. Nick takes a meeting in the agent's pseudo-Buddhist temple-like office.

"Sony has a futuristic sci-fi movie they're looking to make.

"It's the final frontier, Nick."

"But wouldn't they blow up in an all-oxygen environment?"

"Probably. But it's an easy fix. One line of dialogue. 'Thank God we invented the-' you know, whatever device."

In Smoking's supreme moment, the "archvillain" appears. It's Robert Duval's cameo as the octogenarian head of Big Tobacco, doing God's work dispatching Nick (with Joey in tow) with a suitcase full of hush money for a former Marlboro Man recently diagnosed with the big "C."

Reitman gleefully skewers all sides of the K-Street Washington lobby wars Ã¢â‚¬â€ liberals come off as equally shifty and unprincipled in a universe dominated by spin, buckets of money, and the slippery shore of identity politics. A chilly if very funny fable for our times, Smoking leaves us with a father/son bond that stands the test of some very compromising moments.