Sibling rivalry and the space race 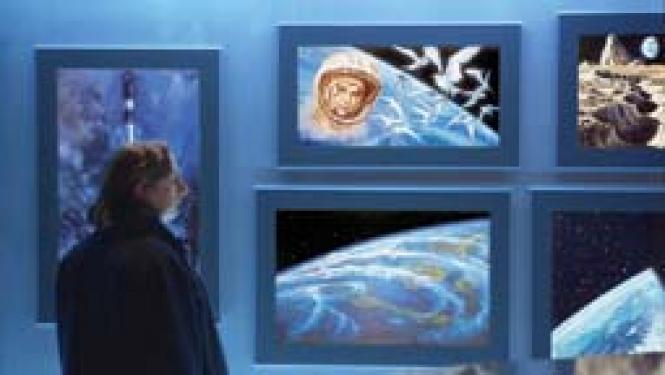 Robert Lepage in Far Side of the Moon.

"I speak loudly, and I'm not ridiculous." A successful gay brother's career advice to his older straight sibling is a fitting motto for Robert Lepage's bittersweet new comedy Far Side of the Moon, opening Friday at the Castro Theatre. It's a film that ricochets between the comic themes of Lasse Hallstrom's My Life as a Dog and almost any effort by Jacques Tati.

In Far Side of the Moon, two Montreal brothers have continued their ferocious childhood rivalry, dividing the cosmos between them with results that are highly unsatisfactory to them, but quite entertaining for us. Andre, the younger gay sibling, has decided to run with the TV weather side. His weathercasts are erudite, if ever so slightly condescending to that vast segment of the North American meteorological map that consists of the US and English-speaking Canada.

Philippe, the sad-sack straight brother, is still struggling in his early 40s to get a doctorate based on the quirky notion that the US/Russian race to the moon was fueled largely by narcissism. Philippe's inability to convince his Ph.D. committee that his dyspeptic view of the universe won't warp young minds has reduced him to selling newspaper subscriptions in a call center ruthlessly run by a bachelor female who resents Philippe's frequent personal calls.

"You have a family?"

"Never wanted to have kids?"

It's hard to imagine a dog surviving that long living with either brother. Philippe has a hard time trying convincing Andre that his upscale life Ã¢â‚¬â€ hunky, tattooed boyfriend and well-decorated condo with a view Ã¢â‚¬â€ won't be unpleasantly cluttered by custody of their now-dead mom's goldfish. "You're allergic when you eat fish, not when you feed fish. It's the last living thing that Mom had! I can't flush it."

Far Side of the Moon began its life as a stage play by the prolific Lepage, a former child prodigy who, in his 40s, has become a one-man Quebec cultural institution spinning off plays, operas and now this, his fifth film. Lepage seamlessly writes, directs and plays both Philippe Ã¢â‚¬â€ unfashionably long hair, with a tendency to wear formal attire like a uniform designed by Chairman Mao Ã¢â‚¬â€ and Andre Ã¢â‚¬â€ whose sarcasm and antiseptic fashion sense make even boyfriend Carl feel that his presence in the shared condo may constitute clutter.

Philippe clings to Mom's nursing-home furniture as if it belonged in a museum, while his sex life has been reduced to humiliating nostalgia. A subscription call turns up an ex-girlfriend who has moved to a far fancier postal code, while a casual trip to a gym sauna gets him cruised by his brother's overly friendly lover. Carl rubs it in by reminding Philippe that he and Andre share one commendable trait, a plump but sexy ass.

Philippe and Andre spend much of the film dueling over Mom's earthly remains, particularly her thrift-shop quality furniture. A funny scene has Andre, with the off-kilter nonchalance of Tati's Mr. Hulot, wrestling a tacky-looking bookshelf in through the doors of a recalcitrant elevator, while in a kind of split-screen effect, Lepage shows us a chorus of seniors singing Christmas carols, joyfully oblivious to any burden they may be extracting on their middle-age children.

Far Side of the Moon is a playful journey through childhood memories, medical calamity and our race's wistful hope that we may yet have a future playing up among the stars. Lepage makes witty use of the new digital-video technology's ability to collapse the gap between him and the resources allocated to a Spielberg. A washing-machine door turns magically into a space capsule's limitless view of the universe. and a man who's never even flown in a commercial jet is finally able to dream of a gravity-free future.