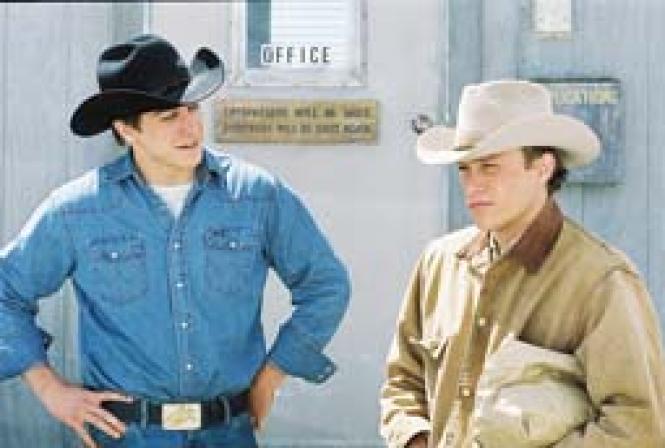 2005 produced such a bumper crop of queer-themed films that we've added a shadow list to the Top 10 (in bold). After each selection, we make a short mention of another fine film (in italics) that just missed the cut.

Brokeback Mountain Heath Ledger gives an Oscar-worthy take on a man who already seems in mourning for a loss he will be late to grasp. Ennis Del Mar is a man of very few words, his face hidden by his hat until a beat-up GMC pickup sputters into view. The driver, Jack Twist (Jake Gyllenhaal), kicks his junker and turns to the camera. A century of movie cowboys can be glimpsed in his ever-so-slight grin. Every pretty actor who's ever ridden across Tombstone Country flashes by our eyes as we observe Jack observing Ennis through his truck's side mirror. Director Ang Lee's deft pacing allows imperceptible accretions of affection to mount between Jack and Ennis, turning them before our eyes, if not immediately before theirs, into soulmates, not merely female-starved, horny guys.

Jarhead masquerades as an antiwar film until it reveals its real purpose. Like Anthony Swofford's bawdy and irreverent memoir, from which it is drawn, Jarhead aims to provide the eternal reason why young men are drawn to war, like moths to the flame. Swofford and director Sam Mendes stress that to most young GIs, even the most fervently created antiwar film is a fighting man's pornography.

Mysterious Skin Gregg Araki brings Scott Heim's harrowing, fantastic, and darkly funny novel brilliantly to the screen. Two eight-year-old boys share an emotionally traumatic night with their Little League coach, then cope with the consequences until they are yoked back together on the cusp of young adulthood. One, Brian Lackey (Brady Corbet), is an introverted young man whose natural fear of life is reinforced by a black hole of lost memory. The other, the sexually precocious Neil McCormick, experiences the summer of amorous adventures with the coach as a scary but dangerously exhilarating rite of passage. Joseph Gordon-Levitt as Neil shows us a pistol of an adolescent who ages and becomes an old soul before our eyes.

Nobody Knows Japanese director Hirokazu Kore-eda gives a claustrophobic account (from a true story) of four kids, born of different fathers, forbidden to attend school and legally invisible, who are inexplicably abandoned by their mother. The film shows the kids as they eat, play and dream about their futures. In America, we like to think that these kids would win an Extreme Home Makeover. Nobody Knows substitutes an emotional sucker-punch of too much knowledge and no easy fixes.

Capote Philip Seymour Hoffman gives a mesmerizing take on a tortured soul who many still regard as one of America's greatest writers. Truman Capote is pictured in the throes of a life-altering period, during the turbulent years when he researched his pioneering "non-fiction" novel. In Cold Blood is an exhaustively reported, tautly written account of the 1959 murders of a Kansas farm family. Its reverberations would send the killers to the gallows and Capote to a kind of premature death, first of his literary aspirations and finally of his alcohol-wasted body. Director Bennett Miller and screenwriter Dan Futterman give a pitch-perfect rendering of the 1950s, capped by Hoffman's turn as a queer man who was powerful, ruthless and, in a few heart-rendering moments, unspeakably haunted and vulnerable, sharing the ghosts of an unhappy childhood that he feared made him a sort of doppelganger to one of the killers.

Walk on the Water. Eytan Fox examines the life of an emotionally distraught Mossad agent. Fox, who has treated us to rugged Israeli guys confronting a sexual-orientation revolution in wartime? (Yossi and Jagger), here tells an even quirkier love story. Eyal (uber-masculine Lior Ashkenazi) is spying on the adult grandchildren of a Nazi war criminal. A young German, Axel (the lovely Knut Berger), challenges Eyal's beliefs about how men should treat each other. Axel's comic attempt to literally walk on the Dead Sea waters leads the duo to navigate the social currents of the Tel Aviv gay bar scene, where Axel hooks up with an Arab kid, whom Eyal regards as a little more than a terrorist. Ultimately, the Israeli reexamines cherished beliefs about the relations between Arabs and Jews, Jews and Germans, men and men.

Munich Steven Spielberg's awesome drama about the murders of Israeli athletes at the 1972 Olympics employs a stellar cast to deliver a taut moral parable on the fruits of revenge. Tony Kushner's story will upset every tidy theory about the origins of terrorism.

Breakfast on Pluto Not since The Crying Game has Neil Jordan notched his three favorite subjects: a genderbending love that couples transvestitism and terrorism; the dying embers of the political strife known to the Irish as "the troubles;" and the ability of treacley music to get a boy/girl through the most revolting problems. This picaresque tale is Candide as filtered through Oscar Wilde. Irish hotty Cillian Murphy brings a muscular yet girlishly demur quality to a soul who, whether playing an Indian squaw singing in an Irish rockabilly band or dumping IRA weapons into a lake, seems, like Wilde, to consider himself above politics, while basking in the sugary strains of Bobby Goldsboro's "Honey."

Imaginary Heroes A hot boy kiss is one of two queer moments in Dan Harris' comedy/drama that aims at showing the implosion of yet another affluent family following the sudden death of a teenager. Think Ice Storm and Donnie Darko as the American Dream goes terribly awry in the bosom of a suburban family.

Transamerica Felicity Huffman is Bree, a person approaching a sex change who still has a little unfinished business: a now fully-grown son from a long-ago one-night-stand. Bree bails the kid (Kevin Zegers) out of jail, and they go on a rambunctious car-trip with pit-stops in places that hold painful memories for one or the other. Huffman and Zegers have the off-kilter chemistry needed for a story where a messed-up kid discovers that his weird female companion is actually his even stranger birthdad. Duncan Tucker pushes the envelope without losing sympathy for his characters. Some hilarious moments involve misplaced trust in a charming hitchhiker and an odd truth revealed in a car's rear mirror.

Girl Play Two women cast as unlikely lovers in a theatre comedy about the perils of lesbian bed-death find that their real lives can't compete with their onstage chemistry.

The Squid and the Whale Noah Baumbach's funny and painful account of what it was like to survive his novel-writing parents' messy divorce in 1986 Brooklyn. Walt, 16, and Frank, 12, are nicknamed "Chicken" and "Pickle" by mom (Laura Linney), while dad, Bernard (Jeff Daniels), is more possessive than affectionate. This family competes over everything: tennis, rival careers, infidelities. Bernard and Walt fight over one of Bernard's teenaged students. A harrowing climax features the image of a large stuffed whale trying to swallow a giant squid, from a diorama at The Museum of Natural History. The image, whose metaphorical weight is neatly foreshadowed in a beautiful monologue by Jesse Eisenberg, washes over a close-up of Walt's lightly freckled face. The film may offer a climb up Oscar's greasy pole for Eisenberg and Daniels.

Thumbsucker Justin Cobb, the narrator of Walter Kirn's wildly funny novel (an amazing Lou Pucci), needs a lot of help to quit a shameful habit, from a Zen-spouting orthodontist; a taciturn, former-jock dad; a celebrity-obsessed mom; a closeted debate teacher; and a panoply of middle-class training wheels: Ritalin and insane competitiveness, tempered by pot and off-kilter teen sex.

Ellie Parker Naomi Watts is a supernarcissistic wannabe film actress who careens like a videogame character across the landscape of Tinseltown, going from audition to audition as she plays an increasing improbable collection of characters. The real ace in the hole is the astonishing screen chemistry between Watts and her next potential boyfriend, deliciously played by filmmaker Scott Coffey. Coffey puts his red-haired liar through the twitchy blender of a male take on a Diane Keaton-like heroine.

Race You to the Bottom Russell Brown gives us a precisely observed comedy about the romantic misadventures of a travel writer who's skateboarding across the Kinsey Scale. Nathan (Cole Williams) has planned a weekend getaway with the woman of his life. That woman, though, has a boyfriend, and in fact so does Nathan. A sublimely funny take on an under-25 set for whom the old labels gay, fag hag, bisexual are supposedly obsolete. But as Nathan and Tara take a winery tour led by a fem guide, Nathan's long-buried resentment of blatant gays surfaces, and in turn provokes Tara's insecurity about being caught loving a guy who's on the run from the love of either sex.

Three of Hearts Susan Kaplan makes us embedded correspondents in a union between two gay men and a straight woman. Like the equally provocative documentary about a male ménage Life in a Box, Three of Hearts is an astringent but entertaining wake-up call to what's possible in the brave new world of universal marriage.

The Joy of Life Jenni Olson's awesome debut is actually two film novellas that straddle the parallel themes of ultimate joy and despair, one found in the embrace of a lover, the other in a desperate leap from one of the world's most heartbreakingly beautiful landmarks. The first describes the darkly funny, bittersweet longings of a romantic butch dyke for the many girls in her life. Transgender actor Harriet "Harry" Dodge, as the narrator, teases us with juicy tidbits from 1,001 nights of good and bad dates. Olson uses a poetic ode to the painterly light of San Francisco to shift gently into the dark second novella, confronting the siren call of the Golden Gate Bridge for troubled souls.

Women in Love Karen Everett's wryly funny chronicle of a lesbian love decade shows the filmmaker having the best sex of her life with the woman she seemingly wants to settle down with. With a nod to Ross McElwee's Sherman's March, Everett finds that the truth, however embarrassing, is best sought by talking to as many of your former girlfriends as possible.