Living & thriving with a rare affliction 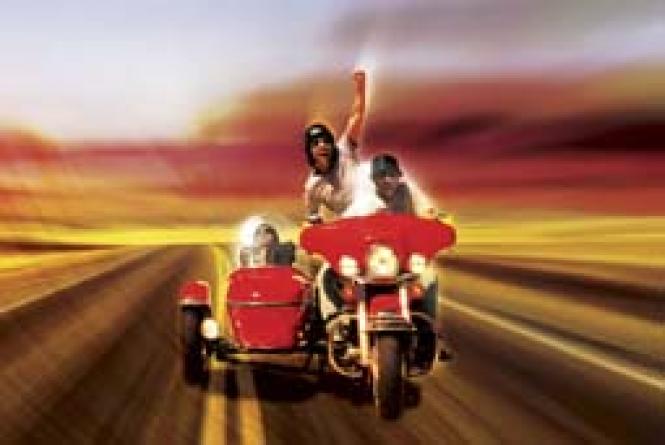 Ami Ankilewitz gets a ride on a Harley.

Sometimes you don't know why you feel what you feel about something that's icky to you until life forces you to confront those feelings. A new film opening Friday gave me a chance to explore my feelings about the severely disabled. It helped that 39 Pounds of Love came to town accompanied by two severely handsome Israeli men.

Dani Menkin and Asaf are both friends of Ami Ankilewitz. Ami is an Israeli citizen born 34 years ago in Laredo, Texas, to a Mexican-born mother, Helena, and an Israeli father who disappeared from his life. Ami didn't play like a normal baby, and when Helena took him to a doctor he was diagnosed with a rare affliction, Spinal Muscular Atrophy (SMA). The doctor pronounced that there was no hope, and that Ami would be dead by the time he was six. Helena packed her son up and whisked him to his absent father's home country.

Decades later, Dani Menkin, an ace reporter at Israeli's version of ESPN, was hanging out in a rough bar when he spotted something remarkable out of the corner of his eye. "I look across the bar and see something that looks like a plastic doll. I took a second look and saw it was a real person connected to a wheelchair. That's how I met Ami. It turns out that Ami is really a cool guy, he's very talented and intelligent, and we became friends. I mentioned to him that I'm a filmmaker, and he told me his story."

Asaf was a struggling student when he applied for a job to be the personal caretaker for a severely disabled person. "I was introduced to Ami through a friend who thought I would be a good caretaker for him. I didn't quite want to work with Ami. He's 30 years old, weighs 39 pounds: probably he's angry about life, complains all the time. I don't want to be there." The day he reported for duty to Ami's house, Helena put Ami in the shower, gave Asaf a sponge, and said she was going shopping. While Asaf was standing holding the sponge, Ami asked him if he had ever washed a car. "Well, it's the same thing, except I can talk." Four years later, Asaf tells me he considers himself to be Ami's friend rather than his now-former caretaker.

Ami has that effect on people on and off screen, and this is good, because Ami needs his friends. The one finger he can move has allowed him to develop a gift for 3D computer animation. Ami loses the company of a female caretaker who he had hoped would become his live-in girlfriend. Shortly after Christina moves out, Ami sets about a radical plan: to transport himself and his friends to his Texas birthplace, to make up with his estranged brother and confront the doctor who predicted he wouldn't survive his childhood.

39 Pounds of Love, splendidly filmed and directed by Menkin, is the story of Ami's journey home, fraught with obstacles, some life-threatening. There's a harrowing moment when we're not sure if Ami will survive his first glimpse of the Grand Canyon. No, he doesn't fall in, but the high altitude and low oxygen content of the air produces a death-defying setback.

39 Pounds is one of those rare inspirational films that doesn't shrink from the awful truths, not only about Ami's life but life in general. In the end you can ride along with Ami, including his first trip on a Harley motorcycle, and not feel horribly manipulated or emotionally mugged. The film is an honest account of one man's struggle to take the next breath, come to terms with but never accept his limitations, acquire new friends and make up with family members, including an older brother who's jealous that Ami's hogged all their mother's love. A bonus that really adds to the filmmaking is Ami's animation that shows the bittersweet trajectory of his love life and heartbreak.

Plus, I got to hug and give a peck on the cheek to a really cute Israeli guy. And plus, Ami, post-film, has a real live-in girlfriend. Not all good deeds are punished. Don't miss this one!