God is their co-pilot 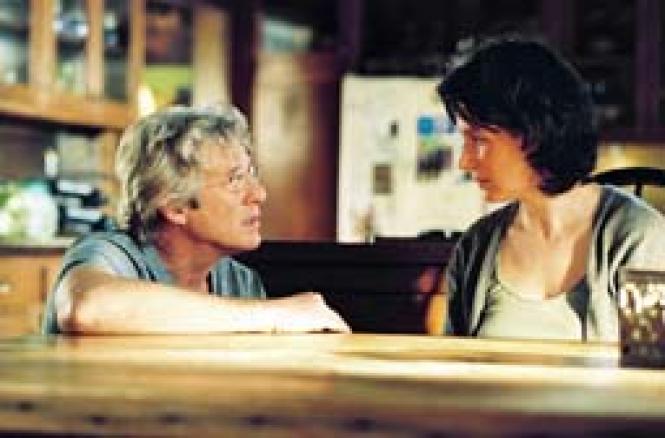 I actually had no interest whatsoever in seeing Bee Season. A family implodes over a spelling bee? Give me a break. But not since Bugsy has my first impression of a film been so wrong. Bee Season is an intelligent, mesmerizing, thought-provoking work, so extraordinary in its content and presentation it is hard to believe it ever got made.

Saul Naumann (Richard Gere) is a college professor who teaches religion, and his wife Miriam (Juliette Binoche) is a scientist. Saul is a typically self-absorbed academician, with a strong interest in Jewish mysticism. He is full of theories about how one comes to know God, and he is affectionate with his family Ã¢â‚¬â€ at least when he isn't caught up in his own head-trips. But his wife Miriam, who is not Jewish, is increasingly disconnected from the household in which they live.

Their teenaged son Aaron (Max Minghella) is a musician who studies books on metaphysics that his father gives him. But it is his shy little sister, Eliza (Flora Cross), who throws the family into a tailspin when she wins her elementary school spelling bee and then takes the California State championship. Saul rediscovers his neglected daughter and begins to teach her how she may experience God through her mastery of letters and words, and become the national spelling bee champion in the process.

Taken out of context, all of this may sound a bit weird. But Naomi Foner Gyllenhaal (mother of Jake and Maggie) adapts Myla Goldberg's novel with extraordinary skill and sensitivity. Directors Scott McGehee and David Siegel (The Deep) weave Gyllenhaal's words into a complex fabric of themes and leitmotifs. The action takes place primarily in Oakland, and the bucolic suburban backdrop of the East Bay has rarely seemed more inviting, or more mysterious. The Naumann family inhabits a superficially perfect world of ideas and mysticism, but the trickle-down from their collective efforts brings as much misery as it does fulfillment.

The complex themes surfaced in Bee Season include the nature of God; the duty of parents to children (and vice-versa); and how one can fail to create a loving family despite the best of intentions. The directors clearly encouraged their actors to hold back in their characterizations. This highly effective approach, implemented perfectly by the four principal actors, results in a film that does not over-simplify the proceedings or reduce them to a Hollywood formula. Nothing is wrapped up in a tidy little ball for the sake of a happy ending.

You will walk out of Bee Season full of questions. You will wonder why the characters made certain choices, and what might lie behind them. You will question if there might be a way to turn the family around. Saul continually insists that by knowing God, the pain and separation of the past can be healed and people can be reunited. But you will wonder where he got this idea, and why he was not better at demonstrating it with his own family. You will not leave the theater with all the answers. But this is part of the magic of Bee Season. It is a film that puzzles and challenges, and makes you think. I can offer no higher praise.