What an older gentleman wants 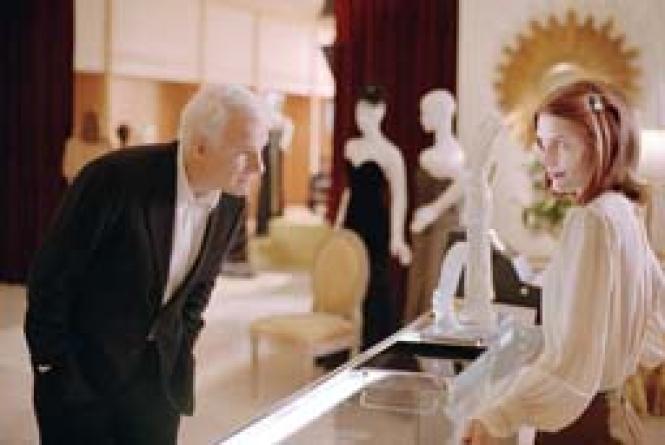 Shopgirl begins with Mirabelle (Claire Danes) on duty at the glove counter of the Beverly Hills branch of Saks Fifth Avenue. The black gloves Mirabelle sells would be suitable for wearing if The Queen invited you to The Palace. The gloves are purchased by an older gentleman, and Mirabelle is surprised when they are returned to her in a gift-box with an invitation to dinner for two. Her host Ray Porter (Martin) is an impeccably dressed, very polite businessman who appears to just want some company for those nights when he isn't off on business.

Meanwhile, Mirabelle is minding her business in a Silverlake laundromat when she attracts the attention of a scruffy young man, Jeremy (Jason Schwartzman), who would appear to be making his annual visit. The scene works brilliantly because Danes' Mirabelle stays the perfectly-bred New England college grad, while Schwartzman's Jeremy looks and at first acts like the young man he played in Spun, a spiraling-down speed junkie who has a girl chained to the bed of his tacky Valley motel room.

Danes and Schwartzman brilliantly perform against the icky subtext of their not-so-cute meet. Jeremy works because he doesn't appear to have an agenda. He's just a stray, a guy who somehow Mirabelle finds herself in bed with, without a condom, but with a Ziploc baggie. Jeremy is no competition for the Rodeo Drive fantasy life offered by Ray. Jeremy is in fact so wonderfully preposterous that when he's not onscreen, both Mirabelle and we forget that he was ever there at all.

Shopgirl is not Sabrina or Breakfast at Tiffany's . In American movies, girls who date rich older men have unhappy lessons to learn. But if Shopgirl isn't a Cinderella story, it does have an improbable touch of Pygmalion, and it's lovely to see who this story's improbable Eliza Doolittle is. Kudos to the trio of stars, especially Martin, who not only damps down his normal screen presence, but who resists the temptation to give us back-story. Martin and Danes are wonderful as a December/May couple who stay true to the heart of the piece. Schwartzman reveals in several dazzling scenes why his notices for innovative comedies like Rushmore were no flash in the pan. This kid has all the right genes from the Coppola family pool.

Danes jumped in with a wicked comment. "That's a good code: 'a moment by yourself.'"

Schwartzman, who turns Jeremy into a slyly feral comic delight, claims to be offended that he would sully his sheets onscreen. "You know what, people think that I'm having a moment by myself — I wasn't. That's not what I was intending to do."

Danes shrieks, "What were you intending to do?"

Schwartzman explains that director Anand Tucker had another idea. "Anand just said, 'Lift up your boxers and scratch just below your belly button.'"

Another reporter breaks in, "But that was code for what he really wanted you to do."