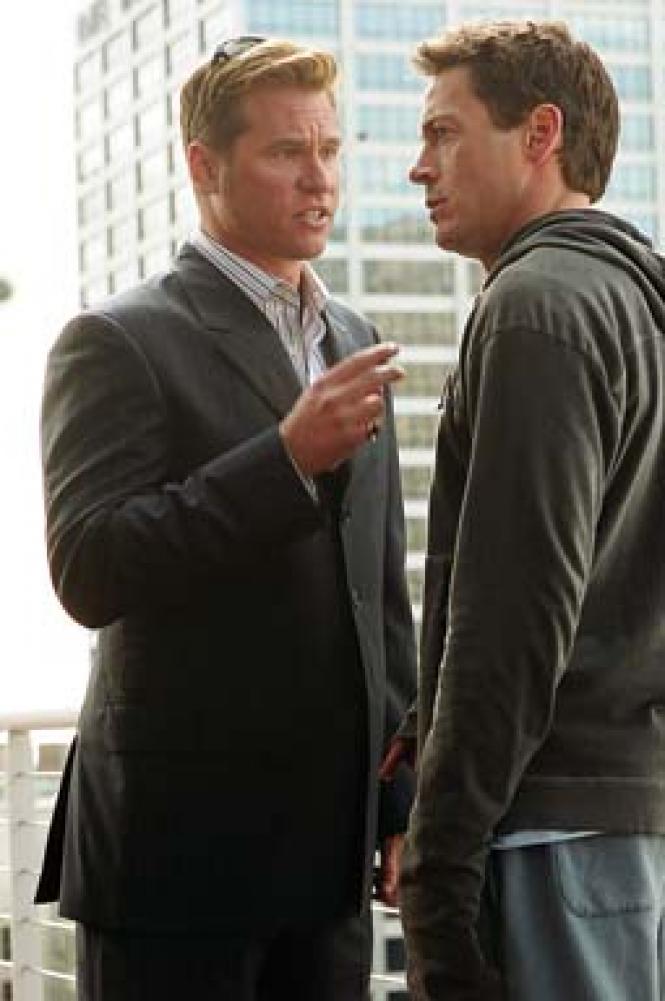 Kiss Kiss, Bang Bang is a Technicolor noir thriller/action comedy that packs more convoluted plot-points into 100 minutes than any film can reasonably handle. Writer/director Shane Black (Lethal Weapon) trots out a cinematic cornucopia of murder, betrayal, incest, pedophilia, and unrequited love, and makes it all seem like a light-hearted romp through a Tinseltown theme park. Black's thematic tongue is planted so firmly in his cheek, it probably pushed out his wisdom teeth. But the final result is a seriously enjoyable goofball motion picture.

Harry Lockhart (Robert Downey, Jr.) is a dim-witted Manhattan petty thief who gets chased by the police after burglarizing a toy store. Fleeing on foot, he stumbles into an audition for a film, and gets flown to Los Angeles to play a detective in an upcoming motion picture. At a pool party, Harry hangs out with "Gay" Perry (Val Kilmer), a homosexual private eye whose job is to get Harry ready for his screen debut. But the men soon cross paths with Harmony (Michelle Monaghan), who turns out to be Harry's childhood sweetheart, and a woman in need of a real detective.

A series of outrageous coincidences follows, separated by car chases. Harry's finger gets amputated, he finds and disposes of a body, and he gets tortured by electrodes attached to his penis. That is just about as far as I can take you in terms of plot. Most of the action takes place in downtown LA, particularly The Standard hotel. And there is a strong leitmotif taken from 50s pulp detective novels featuring a character called Jonny Gossamer. You'll have to put it together for yourself, or not. Frankly, it doesn't really matter.

Robert Downey, Jr. remains one of the most charismatic actors working in motion pictures. Gaunt and wasted-looking, his Harry provides a weirdly self-referential voiceover narration that both parodies and attempts to explain the onscreen action. Through it all, Downey remains adorable. The constantly expanding and collapsing plot-points make in-depth characterizations impossible, but Val Kilmer's gay detective is a refreshing departure from the usual stereotype. Kilmer looks a bit paunchy and bloated these days, but he effectively serves the story as a tough-as-nails enforcer who tries to keep the lunatics and criminals at bay. Michelle Monaghan is required to look pretty. She succeeds.

Kiss/Bang is a bit like the 1996 crime caper 2 Days in the Valley on speed. It starts over-the-top, and it stays there. Laughs spring spontaneously from the audience because of the sheer outrageousness of the story. Who can keep a straight face when a bullet-riddled character lies on the pavement, and his cell phone rings to the tune of "I Will Survive?" Despite all the blood and gore, Kiss/Bang ends up being a remarkably good-natured and surprisingly moralistic little film. Just don't ask me to explain how.