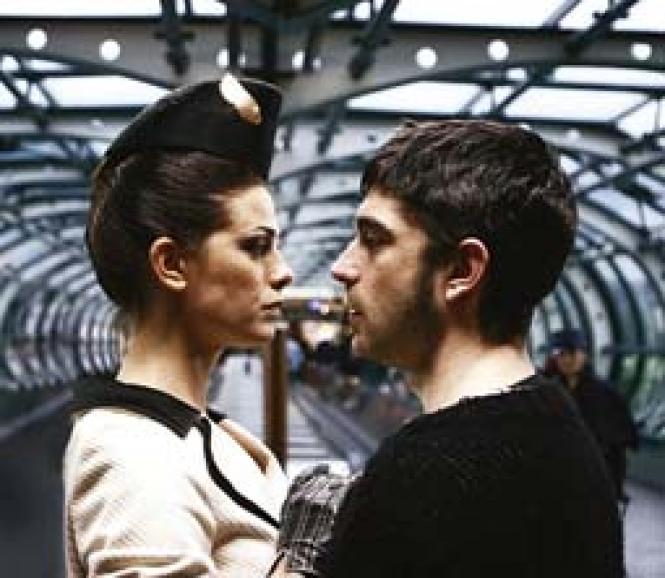 A scene from Round Trip

Frisbee: The Life and Death of a Hippie Preacher Christian documentarian David Di Sabatino reveals the almost-forgotten tale of a long-haired California boy who discovered LSD and Jesus at practically the same moment. For nearly two decades, Lonnie Frisbee would shake and reshape the insular world of Southern California fundamentalist Christians. Appearing before his disciples, a motley collection of surfers and Jesus freaks, the slender young Frisbee, bearing an uncanny resemblance to the Sunday school coloring book Jesus, would help launch two religious movements and ultimately be expelled from both of them due to his homosexuality.

Di Sabatino carefully unpeels the onion of influences that may have shaped young Frisbee, from a bout of wife- and husband-swapping that joined his turbulent family to the family next door, to allegations of molestation at the hands of a babysitter, to appearances on a popular TV dance party show, to an acid trip that brought him in touch with his god, through a stint as a street preacher in the Haight.

Undereducated and virtually untutored in traditional Bible studies, young Frisbee had a talent for laying his hands on the spirits and bodies of young beach kids. As one friend recalls, "The use of drugs created a climate for the supernatural to just explode." This rootless congregation would eventually swamp two small Southland churches and give their older pastors uneasy father/son ties to the hippie preacher who could party Saturday night and still feel the spirit on Sunday morning.

The film takes a while to come to grips with the gay scandal that defrocked Frisbee. He died from AIDS in 1993, virtually abandoned by his Christian community. If you can stand a quick course in Southern California Christian politics, Frisbee will provide a fascinating window on the great divide between spirituality and sexuality that still roils  our nation. (Sequoia, 10/12; Throckmorton, 10/16)

The Squid and the Whale Writer/director Noah Baumbach's comedy/drama was inspired by his family's implosion during his teen years. Jeff Daniels plays Bernard Berkman, a self-absorbed academic whose life spirals down following a messy divorce from wife Joan (Laura Linney), a writer whose career and life choices have eclipsed his. Caught in the middle are 16-year-old Walt (Jesse Eisenberg) and 12-year-old Frank (Owen Kline), now faced with commuting several times a week between the only home they've known in Park Slope, Brooklyn, and their father's messy new digs across the park, where the only entertainment option is an indoor tennis table. A comic and emotional journey inside a broken family, told with humor and poignancy from a teen kid's point of view, Squid snagged the top writing and directing prizes at Sundance, and is inspiring Oscar buzz for Daniels. (Rafael, 10/16)

Transamerica This offbeat road movie has Felicity Huffman (Desperate Housewives) as Bree, a person approaching the final stage before a sex-change operation who still has a little unfinished business to clean up: a fully-grown son from a long-ago one-night-stand. Bree bails the kid, Toby (Kevin Zegers), out of jail, and the pair go on a rambunctious car trip with pit stops in places that hold painful memories for one or the other. Huffman and Zegers have the off-kilter chemistry required for a story where a messed-up kid discovers that his weird female relative is actually his even stranger birth-dad. Writer/director Duncan Tucker pushes the envelope without losing sympathy for his characters. Some hilarious moments involve misplaced trust in a charming hitchhiker, and an odd bit of truth revealed in a car's rear-view mirror. (Rafael, 10/9)

Paradise Now This taut little film by Dutch/Palestinian director Hany Abu-Assad, guerrilla shot in Nablus on the embattled West Bank, details the last 48 hours in the lives of two young men, best friends, who have vowed to become suicide bombers. Said (Kais Nashef) is a study in contrasts. Bright and handsome, he would at first glimpse appear to be the kind of young man who would benefit from the freedoms among the goals of the Palestinian movement, yet Said suffers from an inner wound that leads him on a nihilistic course. His buddy Khaled (Ali Suliman) appears to be eager to follow. A slightly didactic approach to the issues doesn't detract from good ensemble acting. There are touches of dark humor: two cafe patrons dwell on the absurdity of Sweden actually outstripping their little territory as the suicide capital. A timely piece about an excruciating moral dilemma. (Sequoia, 10/15; Rafael, 10/16)

But a film that puts us through classes devoted to misreading Robert Frost and student rock bands doing killer covers of "Wooly Bully" is a kick. A nice dose of secular Jewish wit and wisdom. (Sequoia, 10/8; Rafael, 10/11)

Forty Shades of Blue A second feature from openly gay director Ira Sachs, touted at Sundance. Fans of experimental drama fell in love with Sachs' The Delta, about two young men whose lives head in opposite directions after a one-night-stand. This one features Rip Torn in a sexually charged story set against a music industry backdrop. A young Russian woman's life with a legendary record producer is complicated by her affair with his estranged son. (Sequoia, 10/7)

Round Trip This quirky comedy goes through a couple of identity crises before it settles into an offbeat romantic caper film. Dante (Libero de Rienzo) is the ultimate slacker. A part-time bike messenger who moonlights as a department store Santa Claus (a very bad Santa), he borrows money from the Mob. Dante thinks he's leaving for an around-the-world trip. When a series of mishaps sends him home prematurely, he's faced with paying up fast or getting himself and a stewardess girlfriend very dead. Nifty, sensual bed-scene in the second hour. (Rafael, 10/14, 16)