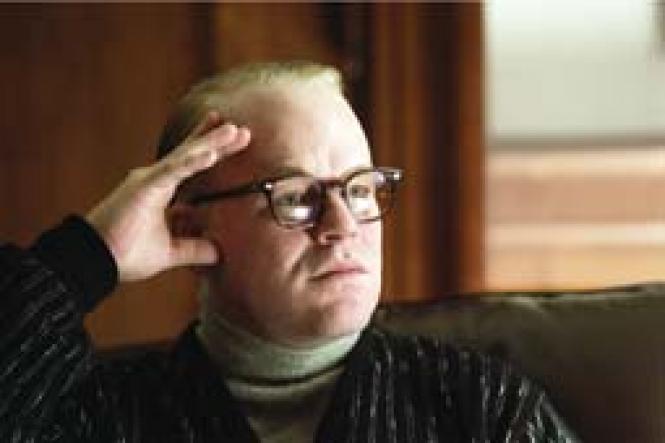 Truman Capote (1924-84) and Tennessee Williams (1911-82) were among the openly gay writers whose post-World War II achievements have had long-lasting influences. Williams transformed American drama, while Capote revolutionized journalism with In Cold Blood (1965). Bennett Miller's extraordinary new film Capote is the story behind Blood, and makes a movie about writing a book as gripping as any thriller.

In November 1959, Capote (a mesmerizing Philip Seymour Hoffman) spots a story in The New York Times about the murder of a middle-class Kansas family. Surprisingly, it interests him. The New Yorker commissions him to write an article on the killings, and sends him to Kansas to investigate. Accompanying Capote is his childhood friend, Nelle Harper Lee, whose novel, To Kill a Mockingbird, has not yet been bought by a publisher. She will be his driver, research assistant, and companion. Capote had already published Other Voices, Other Rooms and Breakfast at Tiffany's, written the screenplay for John Huston's Beat the Devil (1952), and published an interview with Marlon Brando that upset the actor a great deal.

The Kansas authorities regard Capote, with his odd, high-pitched voice, effeminate mannerisms, and elegant clothes, with wariness. But he soon wins them over, charming the cop handling the investigation, Alvin Dewey (Chris Cooper), and his wife Marie (Amy Ryan). He's given unprecedented access to the two men arrested for the killing, Perry Smith (Clifton Collins, Jr.) and Dick Hickcock (Mark Pellegrino). He soon realizes that these events must be retold as a "nonfiction novel." William Shawn (Bob Balaban) at The New Yorker promises him all the space and issues needed to tell the story. Capote bonds with Smith, who is part Native American and seems sensitive, artistic, and intelligent. When their court-appointed attorney proves incompetent, Capote arranges for good legal representation for the killers. Guilt isn't the issue — it's about imposing the death penalty. Years go by, with Capote writing more yet unable to finish until Smith tells him what actually happened on the night the murders were committed. Capote wins his trust by saying that he, too, knows what it's like to be an outsider — how people ridiculed him for who he was, the way he spoke, how his promiscuous  mother left him in the care of eccentric aunts in rural Alabama. It seems as though Capote has fallen in love with Smith. Finally, Smith tells him what happened that night.

When the case is appealed to the US Supreme Court, Capote must decide if he will find more legal representation for the killers. His entire book is based on the assumption that they will be executed. Yet only he can provide the help they need if they are to be spared death. What will he do?

Hoffman's brilliant performance transcends imitation. Every gesture, every vocal inflection, every reaction seems innate, as natural to the actor as it was to Capote. We see Capote the literary lion, lapping up adulation, charming admirers, and we see the artist tempted by ferocious ambition as he weighs the price of unprecedented success. Memories of the real Capote blend into Hoffman's creation and cannot be separated. He shows us Capote's genius, charm, wit, and courage; his vileness, professional jealousy, willingness to betray confidences in the name of art; and the bruised boy underneath the fashionably attired bon vivant.

Collins is compelling as Smith, a tortured, twisted soul who committed a heinous crime, yet seems painfully human, both scary and sympathetic. Catherine Keener is warm and reserved as Lee. She understands Capote, who is happy when her book is sold, yet cannot share her joy in the successful movie based on it. Cooper is splendid as a cop who's never met anyone like Capote, yet comes to respect and admire him because he is unapologetically himself. Bruce Greenwood is warm as Capote's tolerant longtime lover, Jack Dunphy.

In Cold Blood was serialized in The New Yorker (issues flew off the stands), became a bestseller, made Capote wealthy and the most famous American author of the time, and was turned into a good, conventional movie by Richard Brooks, starring Robert Blake as Smith. Capote suggests that the writer was tortured and artistically crippled by the moral dilemma behind his Ends Justifies the Means decision resulting in his success. He began a novel, Answered Prayers, he claimed would make him his era's Marcel Proust. His "research" included befriending wealthy socialites like Babe Paley (one of Boston's legendary Cushing sisters and wife of CBS CEO Bill Paley) and Mexico's Gloria Guinness, whose spectacular beauty enabled her to overcome humble origins to wed the heir to the Irish brewing fortune. He also became an intimate of Lee Radziwell, Jacqueline Kennedy's younger sister. He never finished the novel, but when Esquire published excerpts, it became clear he had betrayed the confidences of his lovely "swans." They silently ended their friendships with him and banished him from their circle, while he feigned surprise, claiming they knew he was a writer and therefore free to use their lives for his work. He became a pathetic caricature of himself: a drunken, bitchy queen, often funny, but in the end, tragic. Despite his impressive achievements, he died with his potential unfulfilled. Capote captures him on the verge of making a Faustian bargain, and is unforgettable. Opens Friday .