Fall into the new arts season 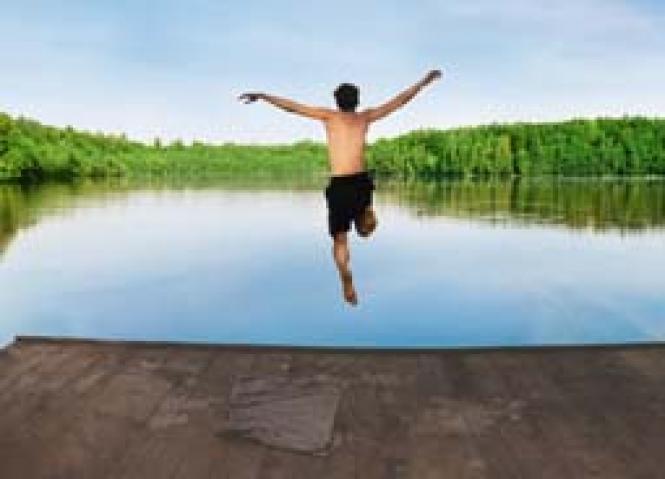 Summer Storm Director Marco Kreuzpainter's film tests the friendship and sanity of a pair of Bavarian high school students as their rowing team competes to be all-German champions. Blond Tobi (Robert Stadlober) has the hots for brunette Achim, his best friend and rowing partner. Tobi and Achim's friendship has always accommodated a high level of strenuous foreplay (wrestling leading to jack-off contests), drunken bowling games and plans to see the world together. But when Achim emerges as a hardcore straight boy, Tobi risks being seen as either dishonest or foolish unless he, too, finds a suitable object of desire. Fate plays its hand when the Berlin women's team drops out of competition to be replaced by the Queerstrokes, an impossibly out team of horny boy-rowers whose leader Martin professes that "straight boys make great toys." The Queerstrokes are a great device for spoofing the sex-obsessed world view of many young gays.

Summer Storm envisions a world where adolescents find their affections and orientation up for grabs, with the outcome a bit more important than winning gold, silver or bronze. It asks whether gays, too, can turn into sex bullies, and whether homos should join heteros in competing for the erotically uncommitted. Stadlober's Tobi is thoroughly convincing as a homo virgin whose loins, heart and conscience will be tested more severely than his rowing skills. (October)

Margaret Cho: Assassin At the beginning of her latest comedy concert video, Margaret Cho is seen gliding through the standard DC tourist beat: White House, Capitol, Lincoln Memorial. "I wanted to find a name for a show that was the most volatile, provocative, incendiary name that would make the right wing go crazy. Assassin: it's just the most hardcore thing to say. People feel powerless, and usually that's when somebody wants to hire an assassin."

Cho gets her biggest laughs at the expense of George W. Bush. "He's by far the most embarrassing President in history. I just think he's fucked. I want to send him poppers and Crisco."

Cho is back, with her claws out, for 85 laugh-out-loud minutes, courtesy of the Here! cable network. (September)

Thumbsucker As a recovered bed-wetter, I can really appreciate the special moxie it takes to kick a childish habit. First-time director Mike Mills takes full advantage of the elfin charms and spunky range of his teen lead Lou Taylor Pucci to show how a boy can rocket from the full-fetal position to become a preppy snide championship debater, with the help of a Zen dentist, a taciturn former-jock dad, a celebrity-obsessed mom and the middle-class training wheels of Ritalin (speed for kids), marijuana and sexual hijinks. Pucci shines as a young man who gets very mixed mentoring signals from adults still stymied by their own childhood scars. A gay theme between Justin and his high school debating coach (a non-alpha-male turn from Vince Vaughn) is toned down from Walter Kirn's satiric novel. Pucci more than holds his own against a stellar supporting cast including Keanu Reeves as Justin's hippy-dippy orthodontist, Vincent D'Onofrio as a dad still mourning his adolescent football career, and Tilda Swinton as a mom who abandons her family in favor of caring for celebrity alcoholics. (September)

The Dying Gaul Playwright Craig Lucas has fashioned a romantic melodrama that combines the lust for money and movie fame with a passionate same-sex affair. A grieving writer (delicious Peter Sarsgaard) brings a very personal screenplay based on his dead lover to a slick, hetero married producer (Campbell Scott). It's a complicated Movieland story involving modern technology that may leave you scratching your head. This one goes very dark. (November)

Race You to the Bottom Writer/director Russell Brown's precisely-observed 20something comedy details the romantic misadventures of a travel writer who's skateboarding across the Kinsey Scale. Nathan (comely Cole Williams) has planned a weekend getaway with the woman of his life. The rub is she has a boyfriend, and so does Nathan. It's a funny take on a new generation some have labeled "the undefineds," an under-25 set for whom the old labels "gay," "fag hag" and "bisexual" are supposedly obsolete. But as Nathan and Tara take a winery tour led by a raging femme of a guide, Nathan's long-buried resentment of blatant gays surfaces, in turn provoking Tara's insecurity about being caught loving a guy who's on the run from love from either sex.

Amber Benson (Tara) graduates from her sidekick role on TV's Buffy the Vampire Slayer to trade verbal punches with the champ, a boy/man who calls her his girlfriend when confronted with an old college buddy he's not out to. "Must be exhausting keeping all those facades percolating along. Something about a serial need to seduce people reeks of self-loathing." Climaxing in the mudbath from Hell, this is a prescient look at a frisky collection of metrosexuals, where anybody can be had, if not happy.

Garcon Stupide Swiss director Lionel Baier gives us a sexy twist on the usual coming-of-age story. Loic spends his time spinning around his French-speaking Canton in what seems like a nonstop series of Internet male dates. Loic flails around to find a purpose for his life that beats his job as an assembly-line inspector at a chocolate factory. A friend tells him he's a great photographer. Should he photograph lions in Africa, or the piercings underneath the balls of a well-hung trick? Misunderstanding life's big words (blasphemy, Impressionism), Loic longs to find the pretty boy inside. The film is structured around conversations with an unseen older stranger who gets under Loic's skin. Caution for frank sex scenes and a large, uncut penis. (October)

Show Me Ever imagine yourself holed up in a cozy cabin in the woods for a weekend of hot snuggle-time with your significant other? Then God has different plans, and you're bound and gagged in that cabin with two certifiable lunatics, runaway teenagers with a complicated past and uncertain future. Canadian filmmaker Cassandra Nicolaou pushes this taut set-up to the breaking point with a trio of gifted young actors.

Capote Two film companies are duking it out to be first onscreen with the juicy details of Truman Capote's truncated career, focusing on the time he spent gathering material for his brilliant nonfiction novel. In Cold Blood invoked the brutal 1959 murder of a Kansas farm family by two handsome drifters. Capote (the rival film has the working title Every Word Is True) has the major asset of Philip Seymour Hoffman as Capote, with a Dan Futterman screenplay based on Gerald Clarke's classic biography. Samantha Morton appears as Capote's friend, To Kill a Mockingbird author Harper Lee, and Chris Cooper is one of the Kansas crime investigators. Capote is said to deal chiefly with the author's relationship with killer Perry Smith. (October)

Hellbent This lightweight entry in the budget teen-splatter department adds one innovation: sexy gay boys who literally lose their heads on Halloween. Nothing special in the story, dialogue or acting categories, but for folks eager for the cheapest of thrills Ã¢â‚¬â€ a handsome guy wrestling a maniac in his bedroom Ã¢â‚¬â€ this may be your date-night delight. (September).