You gotta be cruel to be cool 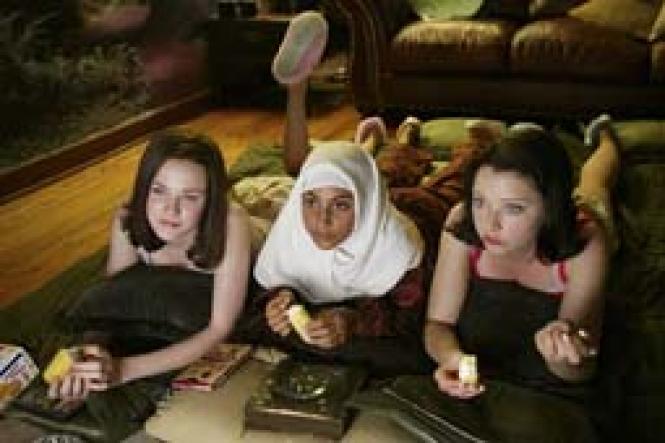 Pretty Persuasiondoes for sexual molestation what the black comedy Heathers did for teen suicide.

"Off the record, I could never give up men. I love cock too much. But sometimes, I need a woman's touch."

In the new high school comedy Pretty Persuasion, with its freshly minted Sundance Film Festival seal of approval, a very mean and ambitious teen, Kimberly Joyce (Evan Rachel Wood), offers an ambitious female TV reporter a juicy incentive to run with her story that she was sexually assaulted by her drama teacher. It is clear from the get-go that first-time filmmaker Marcos Siega, an award-winning music-video director, and screenwriter Skander Halim, a Canadian-born writer who's come up through the trenches of Hollywood script-reading, feel they are doing for sexual molestation what the black comedy Heathers did two decades back for teen suicide.

Wood, who so brilliantly essayed the role of a girl just arrived into the perils of puberty who courts the friendship of her junior high school's most popular and least scrupulous trendsetter in the unnerving film Thirteen, is here, at the ripe old age of 15, given the job of vixen/dominatrix of the 10th grade. Wood's Kimberly sets out to use the title role in her school's production of The Diary of Anne Frank to leverage a star-track ascent into the world of nighttime TV soaps. When her somewhat clueless teacher (Ron Livingston) fires her from the play (she makes a grossly anti-Semitic joke to a male Jewish classmate), the stage is set for a show trial in which Kimberly and her posse try to bury the guy.

Pretty Persuasion rocks somewhat shakily between an even more nihilistic Heathers and the spectacle of a talented young cast (Stark Sands, Selma Blair) performing a parody of the Beverly Hills High School version of Cruel Intentions Ã¢â‚¬â€ which, in turn, was informed by the fun of watching bratty teen actors sending up the French-court sexual machinations of Dangerous Liaisons. This copy of a copy of a copy wears thin at that point in the film when we've run out of nasty revelations, and when the implausibly brutal jokes out of every mouth are telegraphed scenes ahead of their delivery, as in the scene where the high school principal hauls Kimberly up on the carpet. "We can't have our Anne Frank making anti-Semitic jokes. That's a level of irony I can't deal with."

The principal does have a point. Pretty Persuasion is itself drowning in levels of faux irony that are played out long before the final credits. What will stick in the craws of some critics is the film's one innovation Ã¢â‚¬â€ the character of a Middle Eastern female student who's made the butt of the film's most un-PC banter, as in the scene where Kimberly delivers an insult of jaw-dropping cruelty.

"You know, there's a lot of resentment in this country towards the Middle East, a lot of stereotypes floating around, which I don't really think are true. In the short amount of time I've known you, you haven't tried to bomb anybody, and you currently smell okay to me."

Credit writer Halim (raised in Ontario by immigrant parents, one Bangladeshi, one Dutch) with at least creating a Middle Eastern character (completely missing from most current Hollywood fare); doubtlessly, he knows more than I do whether this character has any resonance in life. There is a plot-point that this young woman serves that will bother a lot of viewers. Ã‚Â

Pretty Persuasion is laugh-out-loud funny for a good stretch, and no film-lover can complain when James Woods appears (in about four scenes) in one of his best carpet-munching turns as a volcanically racist dad who gives daughter Kimberly a taste of the nasty medicine she spends the balance of the film dispensing to others.