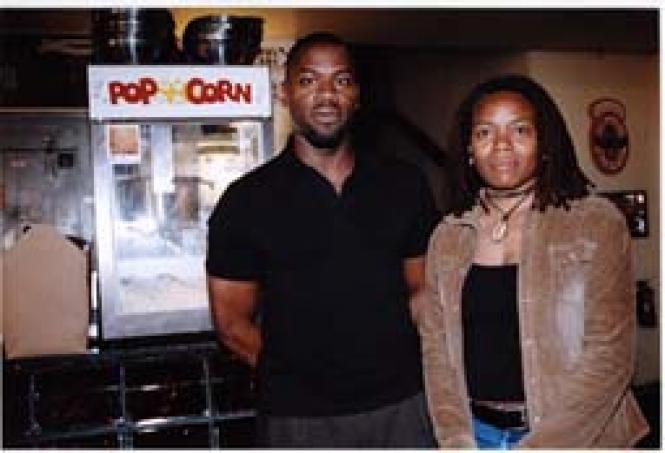 A couple of juicy, must-see features and a bevy of delectable short films provide a number of reasons for checking out the Third Annual Oakland International Black Lesbian, Gay, Bisexual, Transgender Film Festival, playing today through Sunday at the Parkway Theatre. For one of the central events in the Bay Area Black In The Life Pride Week activities, the festival programmers have picked as their central attraction a sensational 2003 feature, Brazilian director Karim Ainouz's portrait of a legendary charismatic cabaret star, lover and master criminal, known by his fans in the turbulent 1930s as Madame Sata. Another must-see event is the Bay Area premiere of Kyle Schickner's Strange Fruit, a complex thriller that finds a gay black attorney returning to his rural Louisiana hometown to investigate the lynching of a childhood friend. The festival's main suit is an eclectic mix of queer shorts exploring subjects from lesbian femininity to female boxers, to gay life in Trinidad, to the problems faced by minority queer teens on New York's Christopher Street, to the dicey life on the "down low" experienced by a group of African-American high school students.

The Parkway Theatre is conveniently located just off Lake Merritt (1834 Park Blvd.) The theatre is known for its relaxed seating and terrific menu of comfort food. Since the theatre has a liquor license, under-21 patrons should phone before attending. Tickets go on sale 45 minutes before the first show of the day. Information at (510) 814-2400 or www.bbitl.net.

Madame Sata Part of a sensational wave of Brazilian films that washed up on these shores in the summer of 2003, Karim Ainouz's Madame Sata portrays a real-life Brazilian folk hero, a popular criminal and minor cabaret star who, while certainly no Robin Hood, did capture the turbulent spirit of a corrupt frontier society where people of color were relegated to the margins of the economy.

Joao Francisco dos Santos, born just before Brazil abolished slavery, to a mother who reportedly traded him for a mule at age seven, grew up a flamboyant small-time crime boss, running a mixed-gender stable of hookers who doubled as personal servants and babysitters (dos Santos was father to seven children). Lazaro Ramos is extraordinary as a cross-dressing trickster who could sweet-talk a john into wanting to have "sex with my sister," all the while moving the guy's hands down along his own ample thighs. A volatile personality, who could go, zero to 60, from sucking your cock to cutting your throat, Madame Sata (a stage name) spent more than a third of his adult life behind bars, refusing to buckle down to Brazil's corrupt ruling class. The film's sex and performance sequences are uncensored, hands-on and passionate.

During a 2003 trip to San Francisco, director Karim Ainouz discussed the research he conducted, scouring official archives, newspapers, books and oral histories to separate fact from fiction. Madame Sata was notorious for embroidering the larger-than-life tales about his exploits, especially from his heyday, the 1930s. Ainouz uses dos Santos' fascination with the tales told by Scheherazade to the evil Sultan as a metaphor for the many and often misleading myths that grew up around the man, and the myriad sides of his dark, often angry life-force.

Ainouz insists that the openly queer dos Santos rejected the stereotype that gay guys were by nature feminine or weak. Dos Santos was accused in court of being "a passive pederast who shaves his eyebrows and imitates women, even changing his own voice," but the director notes that his protagonist was "queer but also a real big macho! He was always challenging the notion of the homosexual as feminine. He was queer, but he could also kick ass. Identity was a playful thing for him. There was a performative aspect to the character which was really important to me.

"It was very hard at that time for black people to get jobs in Brazil. It was nearly impossible. Slavery was abolished only 40 years before he was born, but there was this huge effort by the Brazilian government in the 1890s to bring a white labor force to Brazil Ã¢â‚¬â€ they wanted to whiten the country. So they brought Italians, they brought Germans, they brought Portuguese, they brought Spanish people, they were going to bring some Chinese, and at the very last moment, they said, 'This is yellow, this is not white enough.' There was no work for black people. It's not like they were liberated and they were hired as employees. There was a whole Mafia at the time of people like dos Santos who were doing things on the side to be able to survive." (Parkway, 8/21, 6 p.m.)

Strange Fruit This intriguing drama that deliberately ties the ultimate metaphor of Jim Crow-era persecution, the lynching, to the plight of queer blacks in the modern South features a strong performance by Kent Faulcon as a beginning-to-be-successful New York black attorney whose comfortable practice and prickly love life is interrupted by a late-night phone call. Informed that his childhood best friend Kelvin has been found hanging outside a notorious local gay bar, The Gator, Billy Boyals hops a plane down to rural Louisiana, and back to a world he had confidently put behind him.

While the basic premise owes a bit too much of a debt to In the Heat of the Night, second-time director Kyle Schickner weaves a very original variation on the 1968 Oscar-winning film's potent subplots about small-town paranoia and corruption in unexpected places. Faulcon manages to be a thoroughly versatile hero who always blunders in where others would fear to tread. There is a classic pickup-truck sex scene that inspires me to declare a Lamble film rule: Never interrupt a good blow-job, no matter what the provocation!

The script is saddled with a few too many hoary cliches about small-town Southern life and a weird fixation on the redeeming value of a mother's love, but we never lose interest in guessing where this one is headed. A believable shocker of an ending moves and satisfies, earning the film the right to end with the classic Billie Holiday recording of "Strange Fruit." (Parkway, 8/18, 9:15 p.m.)

Of the numerous short films by and about African American queer life, two particularly stand out.

Roberta Marie Munroe's Dani & Alice begins when a butch asks a fem why's she's buckling her seatbelt. "What, you don't trust my driving?" Some drivers are dangerous to be with, even when you're buckled up and the vehicle's standing still. Later, Alice tells a white friend at the police station, "I can't call the police. She's black. She's butch." More than a commercial against domestic violence, Dani & Alice ties us into the long history of battered same-sex lovers. Times haven't changed that much from the days when beer bottles flew across the room at Scott's bar (in SF's Duboce Triangle) to the present, when fists fly across the well-padded interior of a Swedish station wagon. (Parkway, 8/21, 3 p.m.)

On a very different note, Luther M. Mace's On the Low gives a basic lesson in the ABCs of a schoolboy relationship when two African American kids find love complicating their physical fooling around. With an acute ear for the talk and the walk of the 'hood, On the Low neatly recapitulates the emotional arcs of other adolescent crash-landing films like Get Real and Edge of Seventeen. (Parkway, 8/20, 3 p.m.)