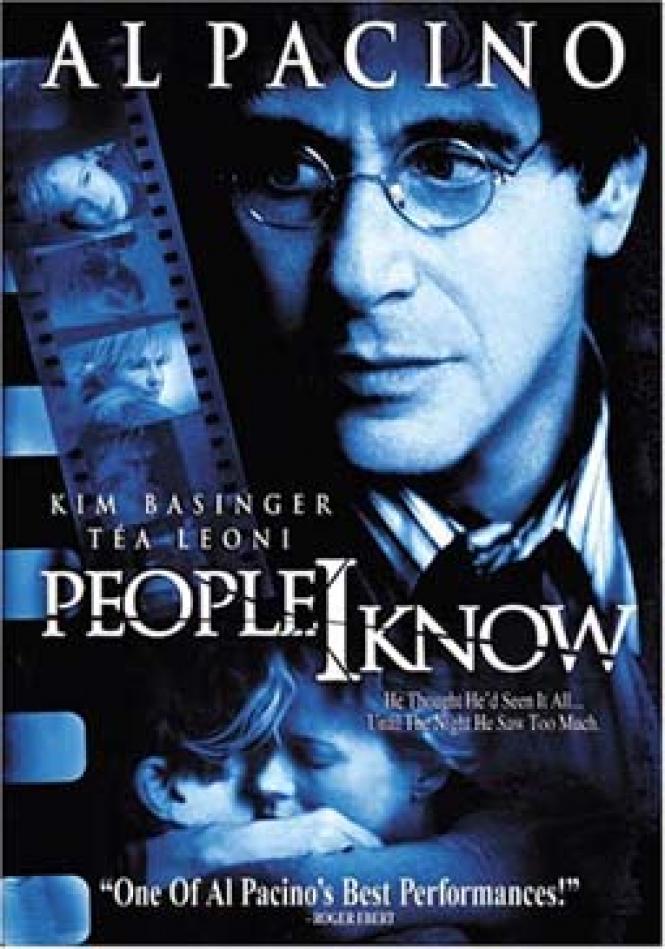 So who put Al Pacino in the closet? Eli Wurman did.

In this delicious, over-the-top look at celebrity publicists and their desperate, self-aggrandizing clients, Al Pacino is phenomenal as the self-demeaning, physically and mentally deteriorating Eli.

The problem is that this temperamental, drug-taking vixen, Jilli Hopper (Tea Leoni), has a few other plans for herself, including blackmailing a few billionaires and other political forces.

Plot is the weakest part of Dan Algrant's People I Know. What you'll enjoy in spades is its rampant wit, uncontrolled luridness, and corrosive sexual come-ons. Kisses here are as tender-hearted as toxic dumps. In fact, Pacino's Eli is sort of a one-man Valley of the Dolls.

Take, for instance, the moment he ushers Jilli into her huge, burgundy-hued hotel room. This is like a giant vagina, he intones.

"How would you know?" she responds.

Between trying to get rid of Jilli and throwing together a benefit for a group of Nigerians detained in a Manhattan jail by the Mayor, Eli is pill-popping and flirting with a handsome model/skateboarder who he insists sit next to him at the benefit.

Openly gay playwright/screenwriter Jon Robin Baitz, who played gay himself in the cult-gay-intellectual favorite Last Summer in the Hamptons, trips over the plot a little here and there. The murders seem forced. Otherwise, he has fashioned a grandly despicable, Grand Guignol portrait of a good man who sells his soul daily to the Devil. Believe me, moral depravity is seldom this much fun. t