Trans and Pregnant: 'A Womb of Their Own' Offers Insight 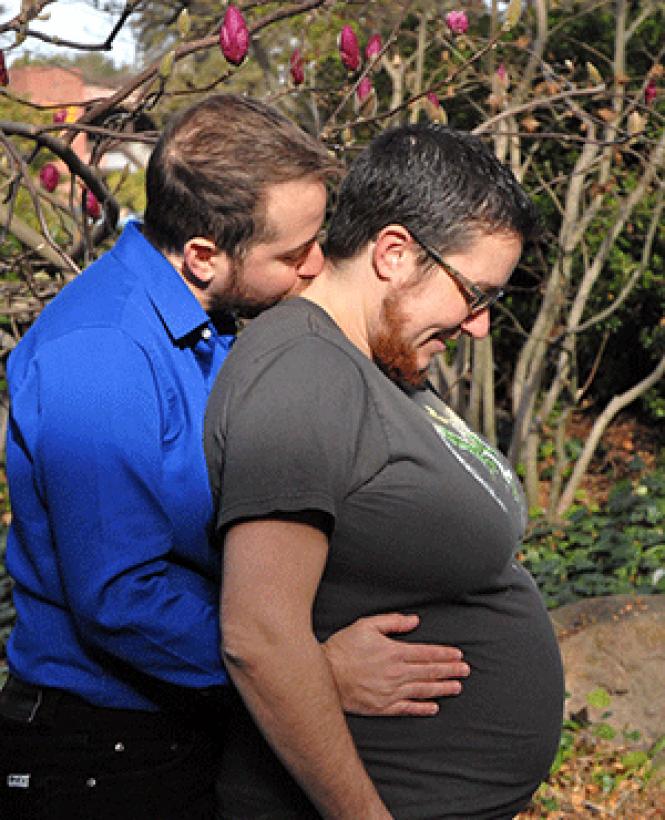 Scene from filmmaker Cyn Lubow's documentary A Womb of Their Own, which screens Sunday at the Roxie Theater  (Source:Courtesy the filmmaker)

How do people react when they meet someone with a full beard, large breasts, and a pregnant belly? Thirty-three-year-old high school teacher Rae Goodman answers this and other questions in the new documentary "A Womb of Their Own," which screens Sun., July 24, at the Roxie Theater. Goodman is one of six "masculine-identified people" who tell the stories of their pregnancies and the minefields they navigated. The film was written and directed by filmmaker and psychotherapist Cyn Lubow, who is also featured in the film.

Goodman, who has had a beard since age 13, said in an interview, "I'm used to the double takes" from people who "can't wrap their heads around a bearded woman with tits." So being pregnant, for Goodman, didn't raise too many more eyebrows. "My high school biology students were quick to understand that both women and men can have beards. News of the pregnancy didn't phase them."

But for those on the street, the reaction was different. "I've actually been asked if I have some sort of secret formula to grow facial hair," she said. "I said, 'No, I'm just a hairy Ashkenazi Jew.' "

Following Sunday's screening, Lubow and a handful of others from the film will answer questions and continue the discussion at a restaurant across the street.

Lubow, who is also featured in the film, became interested in the topic because she, too, identifies as a "masculine off-center gendered person" and has given birth to two sons. "I knew," she said in an interview, "that there had to be more of us."

"My goal for the film," she explained, "was to help relieve pain for people who feel misunderstood, confused or shamed just because their gender doesn't fit someone else's rules. Our culture carries an expectation that pregnant people will look a certain way. There are also assumptions that someone identifying as a man would have no interest in or ability to undergo a pregnancy.

"I want to validate people who are their own unique mix of gender elements. I also wanted to challenge many common assumptions about gender so people who don't fit the assumptions can be more visible, understood, and accepted," she said.

Lubow spent months searching for people who would agree to be interviewed in front of the camera, with five who made the final cut. In addition to Goodman, these were:

Lorenzo Ramirez, assigned female at birth, now identifies as a straight man who dates women. Ramirez, who has a 14-year-old son, talks about the frustrations of being unable to afford top surgery and having to wear a "really uncomfortable," skintight body suit.

Morgan Weinert, who prefers the pronoun "they," identifies as a "fabulous gay man." Weinert says they are attracted to a variety of people that identify as male, both cisgendered and trans.

Darcy Allder, a social work student who had top surgery nine years ago, stopped testosterone treatment and now sees himself as living in a "gender middle space." Allder, most comfortable in a slender body, discusses his struggles with feeling unattractive in pregnancy.

AK Summers, who identifies as a "faggy butch," assumed pregnancy would be "nine months that would really suck." Summers chronicled her experience in a memoir, "Pregnant Butch."

Filmmaker Cyn Lubow disclosed her childhood fascination with facial hair and her attempts to chop up her own hair and paste it together as a thick mustache. In addition to screenings at film festivals throughout North America, Lubow said she has also had requests to show the documentary to groups of "birthing professionals."

"Born to be a psychotherapist," Lubow said she's always had friends coming to her to discuss their problems. She attended Vassar for undergraduate studies. For 25 years, Lubow had a busy private practice, "but that was enough," and she retired at age 50. After a lifetime of "other creative pursuits," including writing poetry and fiction, Lubow made her first film, a narrative short, "The Fifth Stage of Labor," about a single lesbian mom whose only son is getting ready to leave for college.

Based on feedback she has received from those who have seen her new film, Lubow said she's satisfied it is "making a contribution" toward better acceptance and understanding of "how people present themselves along the gender spectrum." For Lubow, her new career as a filmmaker has been a "natural fit. I think the skills I developed as a psychotherapist helped me to get people to relax and tell their stories in front of the camera."