Out There:: Love, Death and Canines 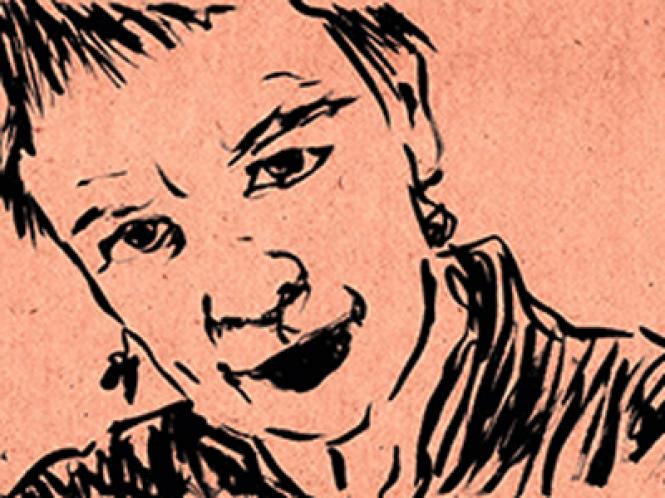 Self-portrait of the artist, from Laurie Anderson's new film 'Heart of a Dog'  (Source:Courtesy the artist & Abramorama)

Laurie Anderson is the consummate American artist of our time. Her film "Heart of a Dog" opens at Landmark Theatres in San Francisco on Fri., Nov. 13.

It's the first film from writer-director-artist-musician Anderson since her "Home of the Brave" in 1986, and that was a concert film. This new offering is a meditation, an essay in words, music and images, about love, death, empathy and the state of America.

Out There screened a streaming video of the piece on OT's laptop, which is not at all the same thing as seeing it on a movie screen (a word to the wise, film publicists!), but nevertheless we saw evidence of all the trademark Anderson traits: Pithy aphorisms, telling anecdotes, hypnotic imagery, dreamy accompaniment on strings and synthesizers. We also listened to the "Heart of a Dog" CD (Nonesuch), which contains the full soundtrack to the 75-minute film.

Anderson has said in interviews that she considers the piece to be something of a radio play, in that the audience hears her in voiceover and visualizes many of the images themselves. In this respect, listening to the CD (on a real stereo system, not through tinny computer speakers) is fully as satisfying as watching the film, and we confess we will do both, again and again.

Anderson is the only artist we can think of who can draw links between the paranoid, proto-Fascist "See something, say something" mindset of post-9/11 America and the linguistic and semiotic insights of philosopher Ludwig Wittgenstein, who realized that if you can't express something in language, it doesn't, in a sense, exist. This sounds deep, but the concept is clear in her telling. The contemporary surveillance state has often been a target of her attentions, but here are more universal themes, such as the connection between love and death, and the importance of empathy. The purpose of death, Anderson the sage has come to see, is the release of love.

Longtime fans will recognize stories, motifs, even musical quotations from earlier works and periods of her decades-long career. There's music from the "Heart of a Dog" score found in different forms on her 2010 album "Homeland," her 2001 album "Life on a String," and her 1994 album "Bright Red." Lyrics, insights, and song titles are recycled from earlier outings. Here, "From the Air" is the title of a 9/11-resonant story. It's a very different piece on her 1982 album "Big Science," itself eerily 9/11-prescient ("Here come the planes"). Most of all, "Dog" recalls "Nothing in My Pockets" (Rien dans les poches), a wonderful sound diary Anderson did on commission for the radio program Atelier de creation radiophonique, for France Culture radio in 2006. This seems her truest form.

The through-line for the new film is Anderson's late rat terrier Lolabelle, who late in life learned to paint and play piano. Some of the piece's most amusing footage was shot at dog's-eye level via GoPro cam during doggy walks through the rainy West Village. But there are also revelations from family anecdotes, found footage of home movies, and paeans to the sky. The artist calls herself a lifetime "sky-worshipper." Spiritual precepts and Buddhist philosophy from "The Tibetan Book of the Dead" underlie much of the film, including concepts of the afterlife and ideas from Anderson's teacher Mingyur Rinpoche, ways to "learn how to feel sad without being sad."

"What are days for?" Anderson asks, after poet Philip Larkin. "To wake us up, to put between the endless nights." "Heart of a Dog" is a visual collage and a musical composition made to wake us up to certain existential realities, but paradoxically it's full of dreamy imagery, hand-drawn animation, artwork, humor and mystery. It's a must-see or must-hear for lovers of matured creativity.

There Out There was in the barking house at The Marsh Berkeley last Saturday night for writer-performer Lisa Rothman's new solo show "Date Night at Pet Emergency," directed by David Ford. It's her Berkeleyish tale of marital strife, challenging child-rearing, and OD emergencies with rescue dogs, and, since Rothman is a natural-born storyteller, it all comes together in an appealing package. OT isn't straight (duh), will never procreate, and thinks cats have it way over dogs, but we were with her every step of the way. Did you know there's such a thing as mother-infant yoga instruction in the Bay Area (of course there is)? Turns out babies don't enjoy the mother-infant yoga warrior pose, go figure.