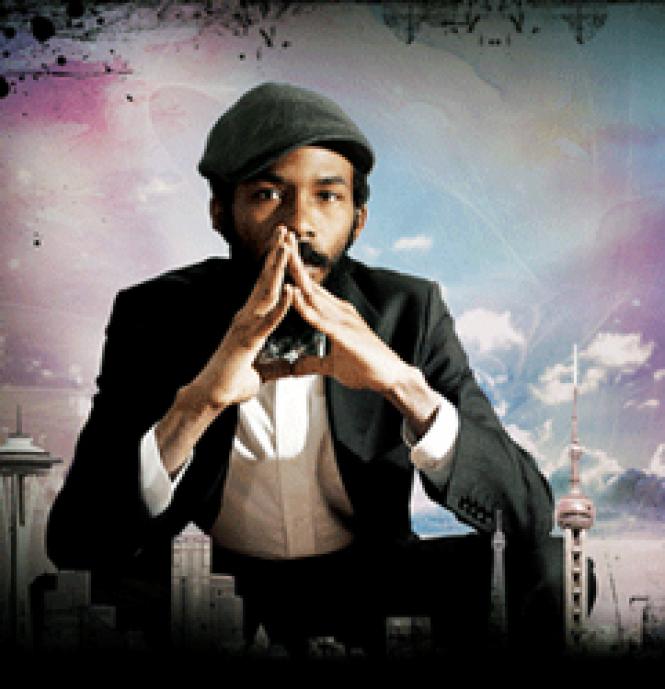 This year there's a special emphasis on "Jews & Tunes," with biographical documentaries ranging from a penetrating look at the evolution of a Jewish blues singer (A.K.A. Doc Pomas ) to the extraordinary transformation of an inner-city Baltimore lad to Orthodox Jewish rhyming rap artist (Y-Love ). Hava Nagila (The Movie) kicks off the Castro Theatre opening night, followed by a party at the Swedish American Hall.

Other festival highlights include Roman Polanski : A Film Memoir; the perplexing life journey of world-class flamenco guitarist David Serva, Gypsy Davy; and the festival's usual quota of off-beat shorts, such as Woody Before Allen, an uproarious account of a small Russian city's attempt to reclaim its Jewish roots by honoring filmmaker Woody Allen, with the honoree's unexpectedly enthusiastic cooperation.

Y-Love As we first meet the former Yitz Jordan, a.k.a. Y-Love, he's hanging with rap-loving co-religionists in Jerusalem, seemingly at home with all the contradictions inherent in a black, Jewish gay orphan rap-artist identity. It soon becomes clear that Y-Love isn't entirely at peace in any surroundings, as Caleb Heller's doc traces his bumpy childhood with a drug-addicted mom, his TV PSA-inspired conversion to Judaism followed by rabbinical training, an extremely short-lived arranged marriage, and an awkward coming out to a white best friend. In-between we witness the inauguration of a unique show-biz career whose arc is still to be determined. (Plays with The Moon is Jewish, Castro, 7/24; Roda, 8/2)

Life in Stills In Tamar Tal's moving portrait across three generations of a rowdy Tel Aviv family, young Ben Weissenstein is helping his 96-year-old grandma Miriam cope with the city's desire to demolish the historic photo archive established by her late husband Rudi, whose million prints document the young nation's early history and provide a provocative peek at Miriam's past life as a feisty acrobatic Czech immigrant. Ben and Miriam's story is underscored by their crabby old married-couple chemistry, Ben's moving in with a male lover, and the tragic circumstances surrounding the death of Ben's parents. (Plays with the short Music Man Murray, tracing the plight of one Murray Gershenz, an 89-year-old LA record-shop owner who's eager to unload his 300,000 albums so he can devote more time to his emerging career as a character actor.) (Castro, 7/24; Cinearts, 7/29; Roda, 7/30)

Stitches Adiya Imri Orr's ambitious short traces an Israeli lesbian couple's passage through the tension-laden territory of same-sex parenthood. It's a difficult labor. The women are on different pages as to how they'll share parenting duties, as well as in their fears about how such a child will be accepted in the ferociously polarized and fiercely tribal Israeli society. (Plays with the shorts program The Best of Tel Aviv University, Castro, 7/25; Cinearts, 8/1)

Glickman Depression-era Brooklyn boy Marty Glickman remembers his dad borrowing his Bar Mitzvah money; well-built but height-challenged young Glickman made school teams because of his speed; he was always aware of being Jewish, but who could have guessed that his religion would block him from a once-in-a-lifetime shot at Olympic gold because the head of the US team harbored an ambition to meet Hitler?

The big, booming bass of Marty Glickman hosting the Dodger pre-game shows with female pioneer Gussie Moran on WMGM, the voice of the football Giants on WNEW, was fantasy material for my dreams of radio fame. As James Freedman's doc demonstrates, Glickman was the first true voice of the fan, inventing a whole new language for our 24/7 sports-mad culture on then-upstart HBO in the 1970s. At life's end, Glickman would in effect dance on Hitler's grave, revisiting the German stadium where his own dreams had been denied. This was a mensch. (Castro, 7/22; Cinearts, 7/28; Roda, 7/29; Rafael, 8/6)

Roman Polanski: A Film Memoir In Laurent Bouzereau's wrenching and revealing memoir, friend Andrew Braunsberg walks the Paris-born prodigy Roman Polanski through still-painful memories of a Holocaust-shadowed childhood. His family made the disastrous decision to return to Krakow, Poland: his mom would die, and Polanski and dad barely survived, permanently scarred by unspeakable evil.

His Polish government-scorned first feature Knife in the Water enabled a horror quickie, Repulsion, "an act of prostitution," before the release of Cul-De-Sac brought pride. The heart of the doc, filmed while Polanski was under Swiss house arrest facing extradition to LA for a 1977 statutory rape case, consists of the director's honest, contrite but always moving and thoughtful analysis of how fate channels the best and worst sides of our nature. (Castro, 7/25; Cinearts, 7/30; Roda, 8/2)

Woody Before Allen Masha Vasyukova scores a major comic coup with this funny short proving that Woody Allen reads and answers his e-mail. The young filmmaker requests that the veteran director judge entries in a contest to pick a statute to honor him in the former German city of Konigsberg, heavily bombed during WWII and annexed by the Soviet Union as Kaliningrad. Allen was born Allen Konigsberg before re-branding himself for show biz. There's a droll chat as Woody picks a winner, wryly regretting that there couldn't be two statues, "at each end of the square." Fans of Woody's War and Peace spoof Love and Death will love Allen's recollections of how he experienced 1970s St. Petersburg. "Nothing worked. I asked the hotel clerk to book me on the first flight out, no matter where it was headed." It's a hilarious, humane tribute to the home of Wagner, Hoffman and Kant. (How to Re-establish a Vodka Empire program, JCCSF, 7/20; Roda, 8/2)

Broken Alain Tasma's hard-hitting melodrama is based on the trauma of a young Jewish teacher in a Blackboard Jungle high school for Arab slum kids. Anna's youthful idealism is shattered by her pupils' defiant rejection of her plans for their history class. Anna gets an earful of rude anti-Semitic jibes, while a subplot shows the emotional meltdown of an Arab boy injured by a distracted French surgeon. This heartbreaking thriller should keep you aroused and enraged for two hours. (JCCSF, 7/29; Roda, 7/30; Cinearts, 7/31)

Ameer Got His Gun The decision of an Israeli-born Arab youth to be the third generation of his family to join the Israeli Defense Forces provides a window on the everyday intercourse between young Israeli men from both tribes. (With My Neighborhood, Castro, 7/25; Roda, 8/1)

A.K.A. Doc Pomus Who knew that the composer of the early rock ballads "This Magic Moment" and "Teenager in Love" was a polio-surviving, Jewish blues singer whose mobility-challenged career pivoted from Elvis to Dylan? Peter Miller and Will Hechter cast a spell around the adventures of Jerome Felder. You'll never be able to hear "Save the Last Dance for Me" again without remembering a man who could never negotiate the dance floor. (Castro, 7/26; Cinearts, 7/28; Roda, 8/4; Rafael, 8/5)

Gypsy Davy Rachel Leah Jones weaves a romantic mystery out of the strange but true sojourn of one-time Berkeley High School student David Jones. The man who was destined to become world-acclaimed flamenco guitarist David Serva is the father who abandoned Jones and her dancer mom when she was a year old. Drawing on an archive of photos, home movies and interviews, Jones shows how her dad became a serial seducer who would flee his latest nest once a child had arrived. This is also the story of a galvanizing art-form and generations of children under its spell. (Castro, 7/23; Roda, 7/28; Cinearts, 7/29)