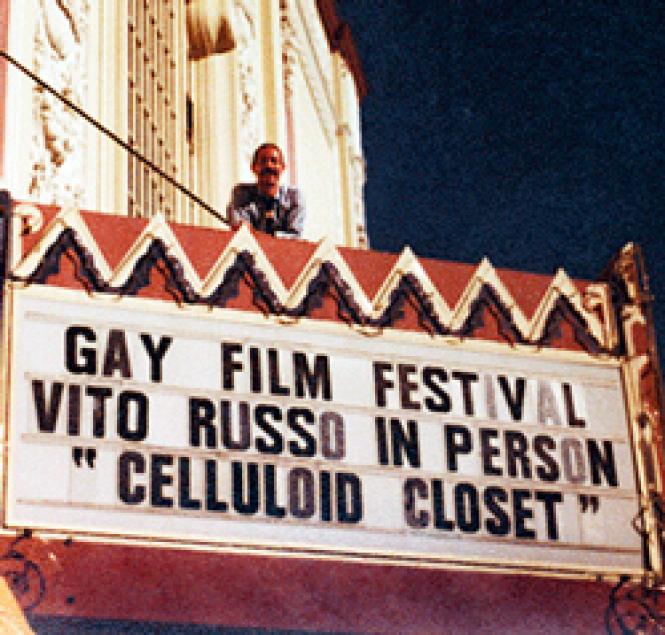 The 36th Frameline LGBT Festival (June 14-24 at San Francisco's Castro, Roxie and Victoria Theatres, with selected screenings at the Elmwood Rialto Cinemas in Berkeley) offers an especially strong array of short films, some of which approach feature length and complexity. I've selected four to highlight among the features.

Vito Jeffrey Schwartz's documentary/biography of queer media activist Vito Russo for HBO is one of the rare politically constructed films with a strong emotional through-line, an undertow that sweeps you out into a sea of feelings normally verboten in the politically constipated world of American politics.

The first emotional peak in the narrative is when Vito explains his peculiar reaction to Stonewall. "I was sitting in a tree in the park and watching what was going on. It didn't do anything but scare me. I just thought these were bunch of crazy queens and they were going to get us all into a lot of trouble. None of this struck me in any way as political."

A young Argentine-born patron, fearing deportation, jumped from a window in the raided Snake Pit bar, and was impaled on a spike fence. "He was critical for three weeks, and somebody handed me a leaflet outside St. Vincent's Hospital: 'No matter how you look at it, Diego Vinales was pushed.' It was the first time I made a political connection to what was happening to gay people, that in fact he was pushed by society." (Castro, 6/14, opening night)

North Sea Texas The Belgian "New Wave" continues to lap up onto our screens. Writer/director Bavo Defurne reworks the classic coming-of-age tale to reveal the cruel fate of a young boy, in an isolated seacoast community in the early 70s, who finds his true love at 15, only to have it ripped away by the fickle fate of his older chum's belief that he has outgrown their backyard wrestling. Pim (Ben Van den Heuvel, as the younger boy, morphs into the gorgeous teen Jelle Florizoone) spends much of his spare time caught up in crossdressing reveries involving his absent mom's wardrobe and jewelry. Defurne's sumptuously photographed setting resembles some seaside Oz. Particularly striking is the Texas roadhouse bar from which the film derives its geographically paradoxical title. (Castro, 6/15)

Keep the Lights On This story about a doomed alliance between a documentary filmmaker (Thure Lindhart) and a literary lawyer plagued by substance abuse (Zachary Booth) will spark intense feelings among gay men who feel at sea in a dating pool swamped by addiction issues. Writer/director Ira Sachs has wisely chosen to tell the nine-year affair from the point of view of the filmmaker Eric (Lindhart), although those in the recovery community may feel this unfairly stacks the deck against those, like Paul, for whom recovery is a lifetime journey.

In a statement made during the film's Sundance debut, Sachs acknowledged the story's autobiographical origins. "I was in a relationship for 10 years in NYC, and on the day it was over I knew it was a story, there was a way to tell it that was different than other things I've seen out there. The two actors both give everything of themselves to these two roles. It's a very sexual performance, there's nudity and an emotional nakedness that is really what's exciting to me as a filmmaker." (Castro, 6/20)

Citizen Change "We wanted [power in] the left-wing Berkeley Citizens Action. There was no thought of [LGBT] people, and when I first proposed there be at least one openly gay person, old-time lefties said, 'Oh, gay people represent 1/10th of 1% of the population, and are insignificant.'" Ex-student activist Leland Traiman recalls the bitter sectarian fights to secure the forerunner to gay marriage, domestic partners.

Face 2 Face "Hello, is this Mary Lynne? This is your Facebook friend, Kat Brooks." For Facebook fans, reality-TV queen Katherine Brooks' search for 50 true friends she could visit for a day and bitch-slap into a new movie may seem the fulfillment of a Mark Zuckerberg wet dream. For the rest of us, this movie is a nightmare, conjuring up visions of a nation of abominable entertainers, each hosting their own little show.

Fans of her Wikipedia resume know the Baton Rouge native's saga: Hollywood or bust, complete with living in her car until she got fast-tracked as an MTV diva director. In the movie's hard-sell prologue we meet a newly humbled Brooks, fresh out the hospital and seemingly friendless. "I was sitting there on Facebook thinking, 'How can I have 5,000 friends, and not one person has come to see me?'" Her solution was to post an SOS invite, which was quickly oversubscribed.

Armed with Xanax and cigarettes and cursing her female-voiced GPS, Brooks arrives at the Grand Rapids, MI digs of "friend" Mary Lynne, a smiley soul caring for her friend Ilene, a terminal lung-cancer patient. "I promised Ilene she would not lie there in the hospital, and that I would be the last thing she sees." (Castro, 6/19)

The Wise Kids The photo in your Frameline guide shows a high school senior at the beach. What the photo doesn't reveal is that Tim (Tyler Ross) has just received a mortifying rebuke from his brother, Braxton (Braxton Williams). What could be the beginning of an adult lifetime of estrangement for these siblings is jump-started when their loving dad confirms the 13-year-old's suspicions about his bro, headed for New York film school. Stephen Cone's serious ensemble piece, inspired by a real-life Charleston, SC church youth group, tracks the centrifugal forces unleashed when a church's "good school citizen," its brightest, sweetest skinny young man, allows his heart to pull him off his faith. The earnest Laura (Allison Torem) starts to press Tim hard.

"I think so. How do you feel about that?"

"Well, I double-checked, and it's definitely a sin, definitely wrong. I can send you the verses if you like."

"Hey, I'm still totally a believer in Christ. I'm still definitely a Christian, but I've just really got to pray about it."

"You should really get help, because you can't be both. That's like a paradox!"

The minister's daughter, Brea (Molly Kunz), returns home late from a queer-friendly club to discover dad asleep in his chair clutching his Carl Sagan; a sexually frustrated church woman resists confronting her closeted choir-teacher hubby; the teacher puts a hunky straight boy up on a cross; and Tim will mouth the words "He's hot" to Brea as they rehearse the annual Nativity play. The Wise Kids straddles the uneasy divide between love and faith. (Castro, 6/16; Elmwood, 6/21)

Shabbat Dinner In Michael Morgenstern's observant short, it's Oct. 1, 1999, and a mainstream Gotham family is entertaining an aspiring rabbi, his pregnant wife and their soccer-playing son Virgo. To the Shores, the Bernstein-Cohens are practically hippies, but as the liquor flows, the adults swap tips on how to keep their sons from marrying out of the faith. Embarrassed by his dad's macho posturing, William (Chris London) ushers Virgo (Dan Shaked) into his Spartan bedroom, and the boys amuse themselves with a Morse code set. Suddenly, Virgo sends an SOS.

Morgenstern and cinematographer Kris Layng's handheld camera get uncomfortably close as the adults get drunk and argumentative, and William and Virgo get down. Gerardo Giraldo's jazz score syncs with the camera's jumpcut syntax to underline the nervous thrust and parry before a first jittery boy kiss. As a tipsy mom coos, "I hope Virgo rubs off on William," in the bedroom William whispers, "Look man, I'm not gay," and after another kiss, "Write down your number." (Fun in Boy Shorts, Castro, 6/16, 24)

My Best Day Erin Greenwell's small-town slice of dyke mumblecore kicks off in a rundown refrigeration business. It's the 4th of July, and the gal on duty gets an emergency call from a dude who seems suspiciously like her long-missing dad. Karen and her buddy Megan (Ashlie Atkinson) head out to discover an unplugged fridge and a house full of eccentric menfolk: dad's 20something boyfriend, a stepbrother, a kleptomaniac sister, and dad himself. Whether your taste for hick weird runs to TV's Northern Exposure or Napoleon Dynamite, you'll get a hoot out of this hyperbolic spoof long before the climactic fireworks. (Castro, 6/20; Elmwood, 6/19)

Fourplay Anthologies are a tricky call, and this one from Kyle Henry proves the rule. Skokie, Austin, Tampa, San Francisco: each of these bergs is assigned a specific kink.

Gail is a jolly, middle-aged closeted lesbian who has an innocent crush on a married lady, Marcy. Given the keys to Marcy's kingdom when she decamps on vacation, Gail finds herself time-sharing with an overly affectionate pooch. This black-comedy segment doubles down on what normally would be way too much information. In my Texas heyday, big-city adult bookstores functioned like queer-boy U-Totems. 2012: a 30something straight couple gets to prowl the aisles and make a baby under the most improbable circumstances. A Tampa mall food-court restroom becomes the sticky gathering spot for boys of all sizes, ages, and urges. The attempt to mix humor and upchuck sex is, at best, a mixed bag. Just when you're ready to flush, director Henry pulls off a moving and sexy segment between a cross-dressing rent boy and an elderly man tied to a respirator who has to signal his consent by blinking. (Roxie, 6/17)

Elliot Loves The peripatetic adventures of a lovesick 21-year-old Dominican-American begin in flashback, as a nine-year-old, TV-raised kid breaks the fourth wall with a spoof of his mom's favorite shampoo ad. Mom uses a break in The Price Is Right to shout through a bathroom door at her precocious little monster. One of the tricks filmmaker Terracino pulls off, ping-ponging between Elliot as a man and as a man/child, is to show that even the smartest kids don't necessarily mature as they age. Because his kid self is the man of the house, we mourn the social smarts that adult Elliot loses as he dumbs himself down for the queer-bar dating game. Terracino makes flashy use of parallel story structure to give us an Hispanic American queer-boy hero who finally transcends his ghetto-bound mom's soap opera fantasies. (Victoria, 6/18; Elmwood, 6/20)

I Do English-born gay boy Jack (writer David W. Ross) is in limbo for lack of a green card. In Glenn Gaylord's compelling new queer family drama, Jack is stretched thin caring for his sister-in-law Mya (Alicia Witt), his young niece, his young fuck-buddy and an arranged marriage to his photo assistant, Ali (The Sopranos' Jamie-Lynn Sigler). True love arrives in the form of Spanish hottie Mano (Maurice Compte). You'll want to be at this sneak-preview screening to see if and how Jack retains his sanity, and on which continent. (Victoria, 6/15)

Slow In Darius Clark Monroe's absurdist reenactment of an on-line hookup, a young African American man snaps pasta in half before dropping it in a pot of boiling water. With dialogue that pops like vintage Tarantino, Carlton Byrd and Harvey Gardner Moore are so good as the year's most out-of-kilter first date. Monroe's synchronicity with his actors gives Slow resonance well beyond any obvious targets: the ironic meanings of the down-low, digital dating, comfort food, and the cliche that opposites attract. (both: Battlefield shorts program, Castro, 6/15)

Coffee & Pie In the land of misguided love, there are several sad places: unrequited, non-reciprocal, and the crummy diner your beloved chooses to drop the "we're now officially over" F-bomb. In Douglas Horn's morose but witty diner comedy (writer: Andrew Stoneham), a young lady with thick glasses and a deceptively slow way of getting to the point meets her lover, a sarcastic Ann Coulter wannabe, who pulls the plug. A character devours everything on her plate, possibly including a no-longer-ex-girlfriend. (Fun in Girl Shorts, Castro, 6/16, 24)