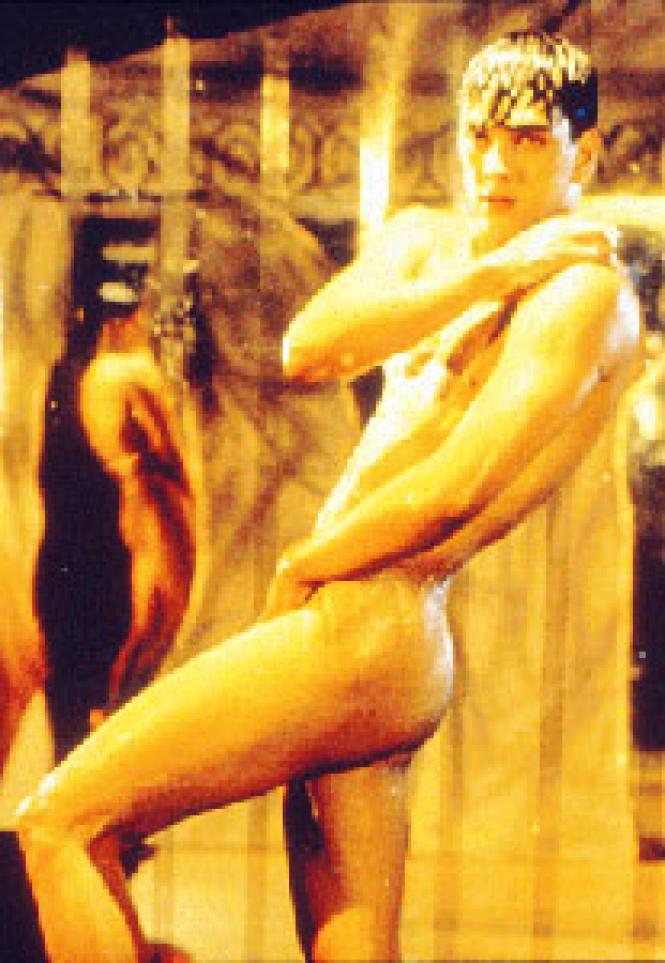 Apart from our legendary LGBT film festival, the action for film buffs this month will be at 2575 Bancroft Way in Berkeley, home to the UC Berkeley Art Museum & Pacific Film Archive, which from June 10-29 will screen dueling retrospectives to American film icons George and Mike Kuchar (Cult of the Kuchars) and the late Hollywood iconoclast Arthur Penn. My Kuchar coverage is based on a one-hour phone chat with George from his vacation HQs in El Reno, Okalahoma (the heart of Tornado Alley), where he indulges his fascination for extreme weather.

The Devil's Cleavage George's homage to Douglas Sirk features the late Curt McDowell trapped in a tacky Oklahoma motel peopled with sexy tramps and no-accounts. "Curt and I would trade actors for our films at the Art Institute. Eventually we had an affair all the while we were making movies like mad. These characters had this terrible angst - they were afraid to wake up because they were going to be miserable. I would write this florid dialogue, and the only way it would play was for me to put this sappy music behind it." (6/11)

Weather Diary 1 "I was very interested in weather as a kid, and I used to read books by Eric Sloan. He was an artist who drew clouds with sort of an aesthetic of the sky. But why just read books? So I flew to Oklahoma City and checked in at the Y, and watched the clouds and the storms moving in."

David Lamble: It's May 1986, and you're in this cheap motel. Kids are playing outdoors in the water, and there's "Runt," the dog you feed, and neighbors you like, and you're surviving on Dinty Moore Stew. It captures a moment.

George Kuchar: That place was razed, and the people who owned it are dead. The kid grew up to be a big, burly guy on a motorcycle.

You do this wonderful direct address to us, with snapshots of the lives of working-class Oklahomans, including tornado pictures taken by the local weather guy.

I'm getting away from my life here, and since I don't have cable TV, I get to watch a lot of cable TV.

I love your ad-lib about "beating your meat" before bedtime. Did you find any tricks?

Hold Me While I'm Naked "My most popular picture really put me on the map. It was my first 16mm sound picture. It was all my voice, because by the time I shot it, I was too tired to dub the other actors' voices. So I played my mother and all the guys in the picture. It was going to be a lurid drama about a mother and daughter vying for the same man, but my star got ill, so I turned the picture onto myself, about a filmmaker not being able to make a movie." (6/15)

A Liberal Helping: Arthur Penn This tribute to a passionate lefty shows the stage/TV-trained Penn's unique ability to bring out the best in his eclectic ensembles, and how even the shakiest of his films contributed to the culture of intelligent, truthful cinema.

Alice's Restaurant This immensely entertaining travesty gets so much wrong about a clan of rambunctious hippies raising hell in 1969 Stockbridge, MA, that perversely, it becomes a moving comic elegy to a social movement that rocked this nutty country. Penn was a fan of Arlo Guthrie's talking-blues ballad "Alice's Restaurant," and decided to use it for a film that would salute the anti-war movement. While Penn completely misunderstood the hippies, injecting melodramatic fictional tropes to make them more palatable to a mainstream audience, his ability to unleash Guthrie's sly, sexy, and subversive mojo preserves the sense of what it was like to stand naked among your peers for a military induction physical. Four decades later, Guthrie's witty insolence, fashion sense and no-bullshit panache remind one of how wonderful it was for emerging queer boys to observe sexy, long-haired straight boys. Implicitly, there are clues here to the popularity of Giants ace Timmy "The Freak" Lincecum. (6/18)

Night Moves This latter-day noir showcases the misguided, homophobic, ex-jock LA private eye Harry Moseby (Gene Hackman) as he attempts to rescue a frisky sex kitten (teenage Melanie Griffith) from a posse of predatory adults. Harry gets the ultimate blow to his wounded masculinity when he observes his wife betraying him at an Eric Rohmer movie. The sting of hearing Harry rip into her "faggot friend" reminds us that when queers first got overt attention from Hollywood, it merely made explicit the subtext directed against America's lavender menace. Griffith's debut alongside a young James Woods prepares us for their glorious 1998 reunion in Larry Clark's Another Day in Paradise. (6/26)

Little Big Man Dustin Hoffman's cheeky performance as the oldest survivor of Custer's Last Stand gives a Bob Hope-worthy comic tone to this uneven if brave satire on the fate of Native peoples in America. (6/26)

The Missouri Breaks Marlon Brando delivers an over-the-top portrait as a cross-dressing bounty hunter who sadistically assassinates a gang of incompetent horse-rustlers led by a sassy Jack Nicholson. This totally unhinged romp, with moments as pleasurable as anything in Butch Cassidy or Unforgiven, anticipates the Coen Brothers' sardonic oaters No Country for Old Men and True Grit. (6/29)

The Left Handed Gun This cockeyed version of the Billy the Kid myth (based on Gore Vidal's play) shows the debt Paul Newman owed to the early death of James Dean. (6/10)

Bonnie and Clyde It smashed American film taboos about sex and violence while demonstrating a young Warren Beatty's unique power as actor/producer. But Beatty also cut allusions to Clyde's bi side. (6/18)