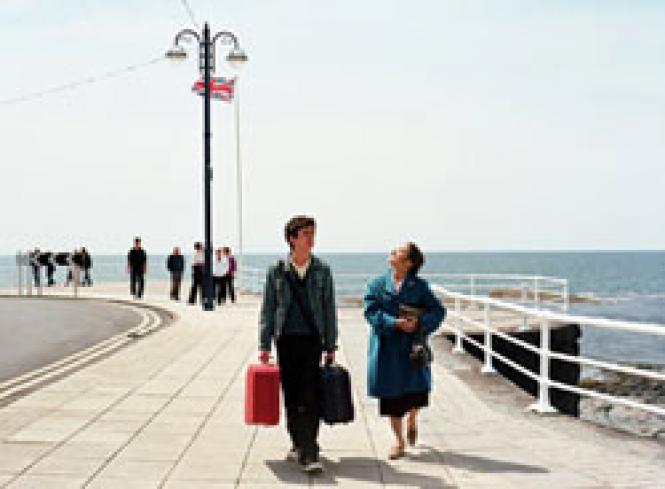 PatagoniaThe expressive young Argentine actor Nahuel Perez Biscayart, whose loose-limbed dancing to music by the Violent Femmes helped win Frameline's Best First Feature Jury Award for the Patagonian horny-teens drama Glue, returns with a restrained but equally touching performance. In Patagonia, he's a boy asked to escort an aging neighbor to a medical appointment in Buenos Aires. The widow surprises the kid with a plan to fly to her native Wales - she wants to see the farm where she was born once more before she dies. This story is coupled with a Welsh-born woman's romantic misadventures in Patagonia's achingly lovely landscape.

Director Marc Evans bases his dueling road stories on the legends attaching to Argentina's Welsh minority, who fled from the hardscrabble poverty of 19th-century Welsh coal mines. The awesome beauty of both lands provokes life-altering angst for the characters, in an eye-popping big-screen treat. (Rafael, 10/9, 14)

The King's Speech Imagine a Kindle with the smell of an expensive book. No? I don't think any scrolling reader will hit me with the fantasy-inducing smells of my British father's copy of a 1947 book devoted to Queen Elizabeth's wedding photos. A close movie equivalent is Tom Hooper's irreverent, behind-the-throne peek at an agonizingly shy Duke of York. It's another peerless piece of observational, non-method acting from Colin Firth, seen in last year's peerless A Single Man. The future king overcomes a paralyzing speech impediment in an age when even a hereditary ruler had to slip into his subjects' living rooms via the "wireless."

Although not your usual "two-hander," The King's Speech gets a huge boost from the odd-couple chemistry between the future monarch and his unorthodox therapist, Oscar-winning Best Actor Geoffrey Rush. Upending centuries of royal prerogatives, Rush's Lionel Logue insists on seeing the future king in his very modest lodgings, and on addressing the uptight prince as "Bertie," a privilege only other royals could claim. This Oscar-bait tour de force should leave you laughing, and perhaps shedding a tear for a very human monarch. (Opening Night, Rafael, 10/7)

Fair Game This political spy-thriller will have many reaching for their Bush-bashing software. But for those who remember post-Watergate efforts to reform the CIA, it's a little annoying to find ourselves rooting for a CIA operative. He's the hero of a tangled story about the hotly contested Iraq invasion. That said, English-born, Aussie-raised Naomi Watts hits all the right American-accented notes as veteran spy Valerie Plame, who finds herself caught between the Cheney/Bush disinformation agenda and her excitable ex-diplomat hubby, Joe Wilson (Sean Penn), who has a penchant for turning the battle over Saddam's non-existent WMDs into a personal pissing contest with Bush bloggers. Watts and Penn nimbly get to that excruciating moment when a private marriage goes toxic in the full glare of our 24/7 news cycle. (Rafael, 10/15; Sequoia, 10/17)

The Housemaid This revenge-fueled Upstairs/Downstairs melodrama climaxes with a very troubled family getting a flaming floor show at their exclusive country hideaway. Laced with very hot master/servant sex between the title character and her very tacky boss, Housemaid puts your faith in the New Korean Cinema to the ultimate test. (Sequoia, 10/15)

HeartbeatsIf you missed Quebec queer-boy auteur Xavier Dolan's first feature I Killed My Mother, don't pass on his Cannes-heralded follow-up, where the 21-year-old sensation, deliciously bratty in his debut feature's bitch-slap to the coming-out story, reportedly produces a combustible menage that may finally get him a US distribution deal. (Sequoia, 10/14, 17 )

The Crocodiles Christian Ditter pushes beyond Disney Channel hyper-cutesy tweener codes with a well-shot juvenile caper spotlighting diversity in modern Germany. It's based on a popular novel about a gang of boys on the cusp of puberty that finds room for a plucky tomboy, a stuttering boy, a weight-challenged angry kid, an undersized kid helping a single mom, an unruly immigrant kid and a lonely, wheelchair-bound rich boy whose expensive telescope prompts their most perilous adventure. (Throckmorton, 10/10; Rafael, 10/16)

Stone Edward Norton, Robert De Niro and Milla Jovovich bring their A games to this prison thriller. A young convict, sentenced for a crime resulting in the immolation of his grandparents, alternately provokes and tempts his parole officer with an ethical dilemma that only begins with sexual favors from his amorally flirtatious wife. John Curran's taut direction underscores the moral sucker-punches hidden in Angus MacLachlan's (Junebug) suspenseful script. It's a religious parable that ranks with James Marsh's The King. (Rafael, 10/9)

Child of Giants: My Journey with Maynard Dixon & Dorothea Lang Tom Ropelewski's multi-layered doc on the lives of two giants of the American art-world, as seen by their troubled first-born son, provides fresh evidence of how a close brush with genius can be unsettling to those not so blessed. It gives insights both inspiring and harrowing into the passions and work habits of two artists who, as much as anyone, taught us how to view America's Great Depression. (Sequoia, 10/9; Rafael, 10/11)

William Vincent & 127 Hours For those desiring a post-Howl double dip of Palo Alto native James Franco, the festival mixes the hip postmodern thriller William Vincent (Sequoia, 10/16; Rafael, 10/17) with the Danny Boyle-helmed, true-life story of a mountain climber faced with a horrific choice in 127 Hours, based on the memoir Between a Rock and a Hard Place. (Rafael, 10/16)

5@5 (the following four shorts): Gayby Jonathan Lisecki's droll short has a queer man and his "fag hag" friend deciding to procreate without kitchen utensils. The dialogue sparkles with the wit and insight of good fiction. A rooftop smoke-break, prior to consulting a home pregnancy kit, turns into a funny/sad meditation on the passing of youth. The onset of life-changes transcends the needs of bringing up baby.

Capture the Flag A teen girl's enthusiasm for a peculiar family ritual, despite a friendly warning by her cute male cousin, results in an unsettling end to a summer in the woods in Lisanne Skyler's astutely emotive short.