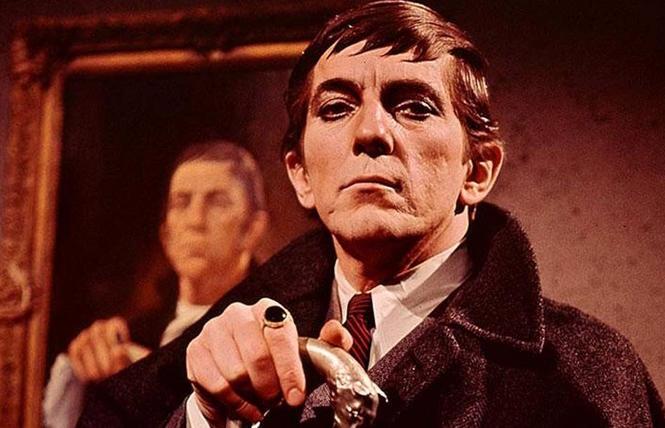 Jonathan Frid on the set of 'Dark Shadows'

A new documentary recalls the life and career of Jonathan Frid, the actor who played Barnabas Collins, a 175-year-old guilt -ridden vampire on Dark Shadows, the horror-themed daytime soap opera that became enormously popular during the late 1960s.

Dark Shadows and Beyond: The Jonathan Frid Story examines not only the actor's work on the series, but also his many appearances on stage as a classically trained actor. And for the first time, the film acknowledges that Frid was a gay man, something gay fans of the series have known for a long time. 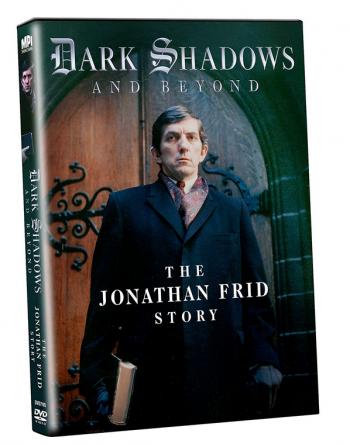 The film opens with a clip from Dark Shadows' 211th episode, in which Barnabas makes his first appearance at the great house of Collinwood, his ancestral mansion. Barnabas, who had finally escaped from the coffin he had been chained in for almost 200 years, passes himself off as his own great-great grandson, and the descendants of his own family accept him.

From that first scene, Frid's magnetic screen presence is apparent. Dark Shadows, which had struggled in the ratings during its first year on the air, suddenly saw its viewership skyrocket. The show was saved from cancellation and Frid, then 43, found himself cast as unlikely teen idol.

Viewers are then whisked back to 1924, when Frid was born in Hamilton, Ontario Canada. The film offers a little bit of background information on his family and recounts how he first got involved in the theater.

From the Bard to Barnabas
From the beginning, Frid was enamored of the classics, and though he played other roles, he was particularly drawn to Shakespeare. While studying in England he received some career advice from Laurence Olivier, his acting idol, and a career was born.

As the film follows the development of his career, many archival photographs of Frid on stage are shown. The actor is fondly remembered by a number of people who worked with him, including talk show host Dick Cavett and noted character actor Anthony Zerbe. Several of Frid's family members also sit down and chat about him.

The main cast of 'Dark Shadows' - A crowd of fans greets Jonathan Frid in a 1960s promotional event.

Dark Shadows fans will not be disappointed, as there's a lengthy segment about his involvement with the series. Frid passed in 2012, but vintage interview clips are included in which he talked about his approach to the character of Barnabas.

The film goes into a great deal of detail regarding Frid's post-Dark Shadows life. Among the topics covered are his 1980s Broadway run in the comedy Arsenic and Old Lace. Co-star Marion Ross, best known for her role as Mrs. Cunningham on the classic sitcom Happy Days, fondly recalls her time working with Frid.

During this time, Frid developed a series of one-man shows. For years he toured the country doing dramatic readings from Shakespeare, Edgar Allan Poe, and whatever else struck his fancy. Clips of him in performance underscore his mesmerizing stage presence and his powerful voice.

The subject of Frid's homosexuality is touched upon briefly towards the end of the film.

"In those days it was illegal to be gay," says actor Barry Fuller, who worked with Frid on stage. "And this played on his mind. And so he was never overtly gay. I talked to my friends who are now in their 80s, and they did the same thing. We were embarrassed about it. We never really talked about it."

While this attitude may shock some Bay Area Reporter readers, it's important to keep in mind that during Frid's era it was indeed illegal to be a homosexual. Gay bars were regularly raided, the police would harass and arrest gay men and drag queens, and coming out could lead to the loss of one's employment. It was a different time, and it's sad to realize that Frid was forced to live like this.

The fact that this topic was brought up at all will no doubt shock a sizable contingent of Dark Shadows fandom, some who remain homophobic to this day. Many of them resort to threats, bullying, slander and gaslighting in order to keep the gay issue from being discussed. At least two people involved in this kind of behavior were interviewed for the film. One can only wonder what they'll think of the final product. Hopefully producer/director Mary O'Leary won't receive any backlash, as many others have.

The film also acknowledges that several Dark Shadows cast members, such as Joel Crothers and Christopher Bernau, had died of AIDS.

"At a time when people were afraid to be near an AIDS patient, Jonathan would sit by a dying friend's bedside to talk, to listen, or just hold his hand," O'Leary says in a voiceover.

The film does an excellent job of preserving the history of a gifted actor who deserves to be remembered. Little is left out of the film's 101 minutes. Viewers will come away feeling as if they knew the man personally.

The film's Blu-ray includes a generous extras menu. Featured are clips of a 1960 TV production of Shakespeare's Henry IV Part 1, in which Frid had a prominent supporting role, and an in-depth 1980s interview he gave to New Jersey Network, a PBS outlet which reran Dark Shadows. There's also audio of Frid reading the classic story The Legend of Sleepy Hollow.