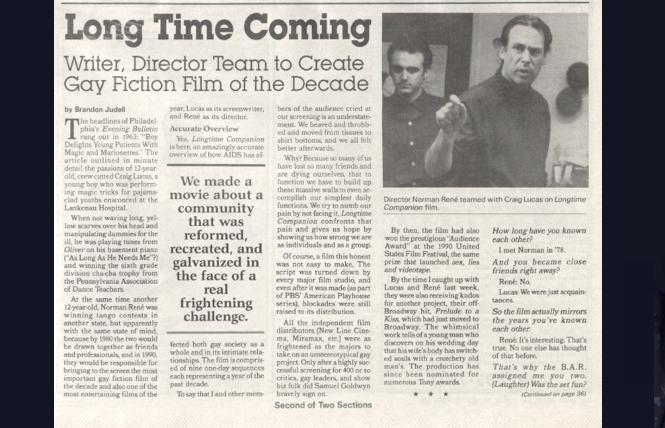 In the May 17, 1990 arts section of the Bay Area Reporter, we get not just one but three articles about the groundbreaking film Longtime Companion.

Despite the smaller independent films Buddies (1985) and Parting Glances having preceded it in 1986 —and An Early Frost breaking ground on TV in 1985— Longtime Companion hit strong with a wide national release, becoming essentially the first largely-viewed AIDS-themed narrative film of the '90s.

The ensemble story tells of a group of gay men whose friends and boyfriends get AIDS, die or survive over the course of ten years.

In the B.A.R.'s coverage, Brandon Judell opens with some biographical backstory on director Norman René and screenwriter Craig Lucas. Judell wrote, "Longtime Companion confronts [our] pain and gives us hope by showing us how strong we are as individuals and as a group."

Screenwriter Lucas said, "The material was so potentially volatile and emotional that I wanted the audience, even if they cried, to have some kind of galvanizing feeling." 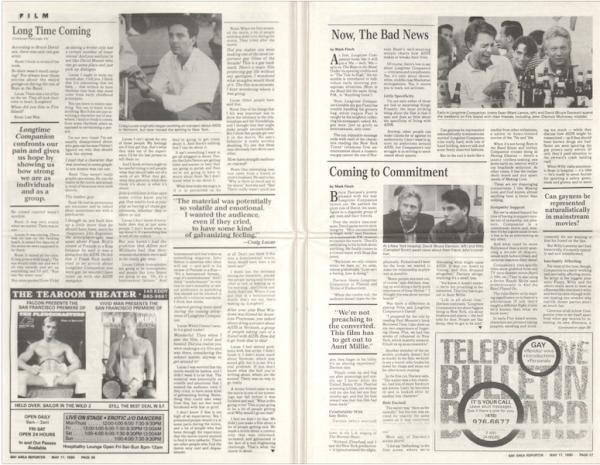 In his review on the jump page, however, the late Mark Finch called the film a "well-meaning weepie." He continued; "It's only about decent white, middle-class Manhattan monogamites," but later gives it good marks for being "hard-working and inevitably affecting."

Finch also interviewed actor Bruce Davison, who said that the film was made for a mainstream (i.e. straight) audience. "We're not preaching to the converted," Davison said. "This film has to get out to Aunt Millie."

Despite its mainstream approach, Longtime Companion remains a favorite on any 'best gay films' list.