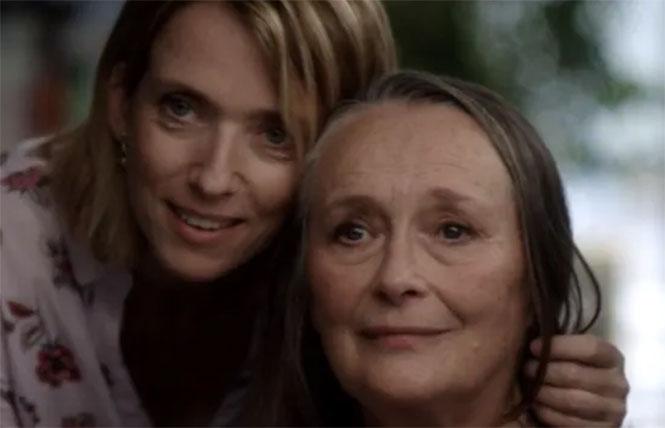 Barbara Sukowa and Martine Chevallier in Two of Us.

Women drop off the cinematic landscape after a certain age. Once menopause hits, the roles revert to background or dowager or crazy person. They are, almost uniformly, sexless. Women only several years older than protagonists are cast as mothers and grandmothers. Suspension of disbelief is a misogynist construct when it comes to women in film.

Two of Us, the French entry for Best International Feature Film at the 93rd Academy Awards, defies that construct. Filippo Meneghetti's first feature-length film, titled simply Deux in French, is a deeply sensual tale of textured, long-standing love and desire between two women over decades. Two of Us is lush, tender, realistic, fiery and haunting. The film will leave you gutted and gasping, sad and outraged.

Nina and Madeleine —Nina calls her Mado— are lovers in every sense. We watch them dancing barefoot, curled together in bed. See Mado look longingly after Nina as she heads off for the day. 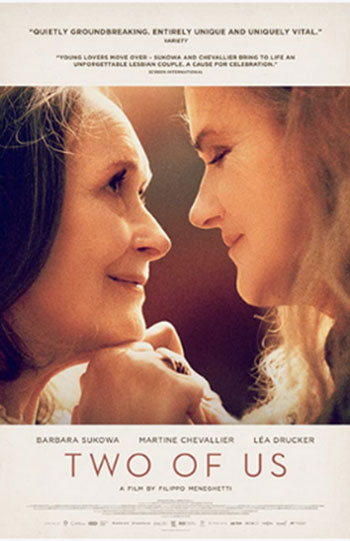 Nina and Mado live like Jean-Paul Sartre and Simone de Beauvoir lived for decades: in two apartments across from each other on the top floor of their building. The reasons for this are manifold, but predominately it is because Mado, who was widowed years before, has been unable, for years, to bring herself to come out as a lesbian to her two grown children, Frédéric (Jérôme Varanfrain) and Anne (Léa Drucker).

That day must come soon, though, as the women are planning a move to Rome, where they will live together, as the loving couple they have been all these many years. Mado will sell her apartment to get the money for their relocation.

This film could not exist without the two principles. These are stellar actors with pitch-perfect abilities. Both are well-known for a myriad of roles over careers that began in the 1970s. German actress Barbara Sukowa (Nina), 71, starred in many of Ranier Werner Fassbinder's films, including his epic Berlin Alexanderplatz and in nearly all of Margarethe von Trotta's films. She won Best Actress at Cannes for the eponymous role in von Trotta's Rosa Luxemburg.

While not well known outside France, Martine Chevallier (Madeleine), 72, has appeared in dozens of French films, more than 30 French TV series and dozens of theatre productions.

Meneghetti sets the scene of Nina and Madeleine's love affair and the tensions over Mado's inability to come out to her son and daughter. There is a dramatic scene on the street as Nina discovers yet again that Mado has failed to come through for her —for them¬— on this.

Nina confronts the realtor and asks him, embarrassing Mado, "Do you have a problem with old dykes?" He is taken aback as says, "Excuse me?"

Furious with Mado, Nina paces back and forth on the sidewalk, and fairly yells, "Dykes. Lezzies. Lesbians."

When the realtor says he doesn't care if they are lesbians, Nina turns to Mado and says, "See? No one cares!" Mado is shaken, her look pleading. Nina calls her pathetic and storms off, Mado trailing behind, unable to call after her lover or say a word.

The scene is fundamental to the conflict that rages between this otherwise loving and happy couple. It is also foreshadowing of incipient tragedy. Mado has a stroke, leaving her unable to speak, and unable to contact Nina. And the film takes a dramatic turn from there. 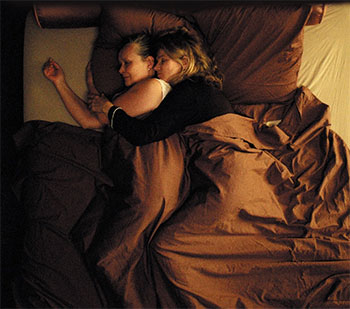 Family interference
To Mado's children, Nina is the neighbor across the hall. Madame Dorn. She is nothing more. And when Nina tries her key in Mado's lock one day, it does not turn. She is literally shut out of Mado's life, which is her own life.

Two of Us is breathtaking stuff. Sukowa's performance is incendiary. She is gorgeous and sexy and full of fire. She has lots of dark blondish hair that is haphazardly braided or wildly cascading. She exudes a sensuality that we have come to associate with much younger women. She is passionate about Mado and not about to let her go.

Chevallier's Mado is more demure. She has a delicate vulnerability within her casually elegant manner. It is clear she defers to Nina, but equally clear that Nina is central to her existence. Chevallier's performance is lower-key than Sukowa's, but incredibly deft. Much is demanded without speech.

These women live for each other and through each other, which makes the trajectory of the film at times almost unbearable to watch. The viewer feels often as if they are witnessing a crime, and what happens to the two women is indeed criminal.

Mado claims that Frédéric is the problem, but it is really Anne who refuses to see the life her mother has, or even that she has a life. Anne doesn't like Nina coming around to see Mado. She finds it an interference and eventually feels threatened by Nina's omnipresence in her mother's life, to devastating consequence.

Two of Us is part love story, part psychological thriller, part deconstruction of the power children hold over their parents long after they should be living their own lives irrespective of what their parents do. There is also the truly harrowing element of what happens when the body betrays us, as Mado's does her, and how one remakes a life when so much has been taken from it.

Two of Us is compelling, if shattering viewing. The acting, writing and direction are all superb. But Sukowa's performance is something one will not soon forget.