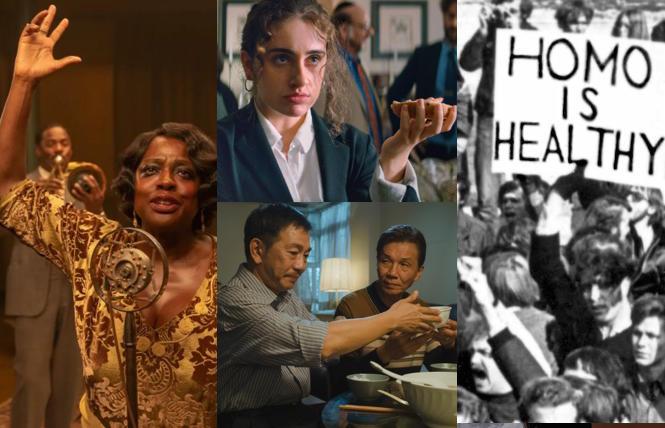 2020 will go down as a banner year for lesbian-themed films, both in terms of quality and visibility. Four of my picks for best queer movies of 2020 were lesbian-oriented and two others came very close to making the final cut.

Summerland (IFC DVD) is an English period piece about a woman harboring a child refugee during WWII, causing her to reflect back on an interracial love affair she experienced with a female classmate in college. The reliably outstanding Gemma Atherton stars; it's lovely, gorgeously filmed, but my only reservation was that one had to accept an implausible plot twist toward the end, straining credulity. Yet it is still well worth watching.

The Half of It (Netflix) is a teen rom-com, directed by lesbian Alice Wu (Saving Face), about Ellie, a Chinese-American high school student, who earns money by writing essays for other students and is asked by friend Paul to pen a love letter to a girl Ellie secretly likes. This charming clever queer version of Cyrano de Bergerac is delightfully romantic, but seemed more like a TV After-School Special than a theater film. Though, as mentioned last week, that distinction is quickly disappearing.

Finally, three other films, Ammonite, Happiest Season and The Prom, all reviewed recently in the Bay Area Reporter, though generally disliked by myself and other critics, still garnered big stars and a huge amount of press; unthinkable a decade ago. Two of these films, Happiest Season and The Prom, made inroads into two genres, holiday, Christmas and the musical respectively, which previously had almost zero lesbian presence, a worthy achievement that one hopes will be represented by finer movies in the near future.

Overall, due to sheer excellence and ingenuity, lesbian films have finally become mainstream, and queer popular movies are increasingly starring and being directed by LGBTQ people, especially women; creative developments emerging as one of the few rays of light in a bleak year that decimated the arts. Now, here are our Top Five in cinema.

Shiva Baby (On Demand) and Breaking Fast (Wolfe Video DVD) tie in comedy. Both comic films are breakthroughs as they depict religion, not as an obstacle, but a source of strength and harmony for LGBTQ people, even though both lead characters are a bit of a mess.

Shiva, one of the best bisexual movies ever, essays a fascinatingly confused Danielle (Rachel Sennott in a star-making performance), who attends the Jewish funeral of someone she barely remembers, to satisfy her parents, hoping she might find a suitable husband. She encounters both her ex-girlfriend and the married man she is currently having sex with for pay. The film hilariously explores Danielle's misguided attempts to figure out who she is and what she wants personally and professionally. This grand slam is un-missable at all costs.

Breaking Fast is a historic quantum leap about a neurotic gay practicing Muslim doctor Mo (Haaz Sleiman) living in West Hollywood as he falls in love with Caucasian actor Kal (Michael Cassidy) during the holy fasting month of Ramadan.

Goddess of Fortune (YouTube; Breaking Glass DVD) and Twilight's Kiss (Strand Releasing DVD) tie in the foreign language category. Goddess, directed by the great Turkish-born Italian director Ferzan Ozpetek (Steam, Saturn in Opposition), concerns an aging, passionless gay couple whose relationship is tested when their best friend, facing a medical crisis, must leave her two children in their care. They must deal with their own resentments, regrets, infidelities, and secrets as they forge a possible new family. The film's mood swings from Fellini-like joie de vivre to pathos, while retaining humor and zest without becoming saccharine; a jewel that will restore your faith in relationships.

Twilight's Kiss is director Ray Yeung's follow-up to his award-winning Front Cover (2015), about two elderly closeted married men in Hong Kong, who meet in a park and fall in love for the first time. They must choose between their desires for each other or the biological families they have proudly created; an excruciating decision as blood relations are prized above everything in that society. It subtly reimagines how you define home. This endearing treasure of a film reminds us that love can happen at any time of life, though there is a simmering anger at ongoing discrimination, whether it be age or sexuality.

Ma Rainey's Black Bottom (Netflix). August Wilson's 1984 Tony Award-nominated play is adapted for a thrilling film, chronicling Ma Rainey ("Mother of the Blues") as she and her band gather in a 1927 Chicago recording studio to make a new album of her songs.

Ma (Viola Davis) fights over control of her music with the white owners of the record company as well as her ambitious hot-headed trumpeter Levee (the late Chadwick Boseman) who wants to record a more up-tempo rendition of her song "Black Bottom" and start his own band.

Ma, based on a real-life figure, is a lesbian with a girlfriend (who also flirts with Levee), but her sexuality is only a minor portion of the film, whose themes of a black woman claiming her own power and autonomy, living by her own rules, making sure her voice is heard, in a blues of defiance, will resonate with LGBTQ audiences.

Davis and Boseman give superlative, powerhouse, likely Oscar-winning performances, but the real star is gay stage director George C. Wolfe (Angels in America, The Normal Heart) with his jazzy pace keeping the narrative flowing, allowing the crackling dialogue to sparkle without becoming talky or stagey. Magnificent in its construction and stunning conclusion, agilely showing how little progress has been made in whites exploiting and demeaning African-Americans.

Portrait of a Lady on Fire (Criterion DVD). Filmed last year but screened in the U.S. in February, this coup de grace French lesbian gem was nominated for nine Cesar (Oscar) awards.

Set in 1770 on a remote island off the Brittany coast, it's the story of a five-day affair between a female artist and her subject, a countess's daughter betrothed to a wealthy Milanese nobleman.

With a combustible passion between the two leads, intoxicating visual poetry, and its dreamy sensual evocation of the transformative power of art, the exhilarating, never boring Portrait is one of the best lesbian films ever made.

Cured (PBS, Fall 2021). A great documentary by definition allows the viewer to see a person or event in a new light, reinterpreting their importance or historical significance. Cured is the captivating account of activists (especially Frank Kameny and Barbara Gittings) who in 1973 fomented a pivotal victory of the American Psychiatric Association to remove homosexuality from its manual of mental illnesses.

This film argues persuasively that next to Stonewall, this was the landmark moment in the LGBTQ equality movement, which made possible future successes, such as the repeal of the U.S. military's 'Don't Ask, Don't Tell' policy, and same-sex marriage. The electrifying seminal tipping point occurred at the 1972 annual APA Dallas convention, when an anonymous masked gay psychiatrist testified about his agonizing experiences living as a closeted therapist.

Suspenseful and including riveting interviews and testimonies from key players just before they died, Cured is not only this year's best documentary, but the best LGBTQ film of 2020.

Honorable Mentions
Secret Love (Netflix), a tender documentary on the 72-year-old love affair (increasingly compromised by aging and illness) between two Canadian-American women, one of whom was a softball celebrity catcher on the All-American Girls Professional Baseball League during WWII, source material for the 1992 Penny Marshall hit film A League of Their Own.

Oliver Sacks: His Own Life (Kino Now; KinoLorber DVD), an inspiring documentary on the exploits of the renowned gay neurologist and best-selling author, who finally found love very late in life with the much younger writer/journalist Bill Hayes, featuring final interviews with Sacks, a few months before his death from a rare cancer in 2015.

Bad Education (HBO Max), whimsical yet sad true story about a charismatic gay superintendent (Hugh Jackson in a career peak, Emmy-nominated performance), who embezzled $11 million from a Roslyn, NY high school, only to be exposed by a school newspaper reporter.