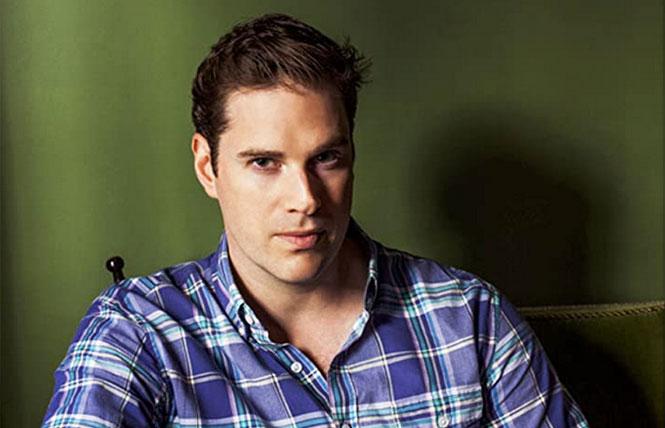 In The Artist's Wife (Strand Releasing), Lena Olin plays Claire, the titular woman who put her own artistic career on hold so that her successful and established artist husband Richard (Bruce Dern) could continue being in the spotlight. But, the light begins to fade following his Alzheimer's diagnosis and his rapid decline causes their life to begin crumbling.

Slightly reminiscent of the 2017 Glenn Close movie The Wife (for which she received an Oscar nomination), The Artist's Wife is very much its own movie, but don't be surprised if Olin gets her own Oscar nomination for her performance. 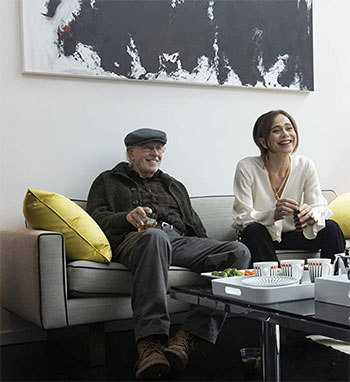 Bruce Dern and Lena Olin in 'The Artist's Wife'

The Artist's Wife's gay writer/director Tom Dolby, who some may recall from his 2001 debut novel The Trouble Boy, as well as his work as producer of high-profile films such as Call Me By Your Name and Scotty and the Secret History of Hollywood, was kind enough to answer a few questions before the new movie was released in September 2020.

Gregg Shapiro: I had the pleasure of interviewing you for the first time in 2001 when your debut novel The Trouble Boy was published, and then again 2007 when the book Girls Who Like Boys Who Like Boys, which you co-edited, was released. What did you enjoy most about writing and being an editor?

Tom Dolby: I really like the collaborative nature of it, in terms of editing the essays and working with Melissa (de la Cruz) and working with the other writers. That was very much what led me from novel writing to filmmaking. My last novel came out in 2011, so it's been quite a while. I would love to write more novels, but I have found that the filmmaking process is so much more collaborative. I do enjoy being in touch with people and communicating with other people and exchanging ideas. Being a novelist can be very isolating which, obviously these days, is the last thing we need.

As a producer you were involved with films of queer interest such as Call Me By Your Name and Scotty and the Secret History of Hollywood, as well as Little Men directed by gay filmmaker Ira Sachs. Is being a producer a part of the collaboration concept you mentioned?

It absolutely does. I think I'm drawn to projects that have like-minded people involved with them. Creative people who I enjoy talking with, where we have a meeting of minds. If someone is doing a project like Call Me By Your Name or Little Men or Scotty, it's exciting when you meet them because you feel like you're all creating something together.

From my perspective as a producer, it's very much like, "How can I be most helpful and help this person get one step closer to realizing their dream?" With a number of those projects, particularly Call Me By Your Name, it was many years in the making. The filmmakers and the key producers who were involved with it had to have incredible stamina in continuing to develop it. When I'm involved in a project like that, I hope that I can be a cheerleader or give some perspective when it seems like there's no light at the end of the tunnel in terms of something reaching fruition. 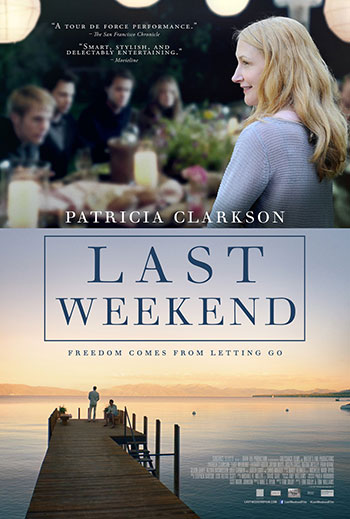 In addition to producing, you've also gotten behind the camera as a director, as well as a screenwriter, for 2014's Last Weekend and your new film The Artist's Wife. What has that transitional experience of being a writer/ director been like for you?

I really love directing because, for me, it involves so many different disciplines that I'm interested in. Certainly, the storytelling aspect of it ties in with the writing. As a director, when you're in the editing room, you're constantly rewriting your own script (because of) the performance the actor gave or if the actor maybe did an ad-lib or something happened by accident or whatever. You're constantly reshaping and rewriting really until you have locked your cut. That part is exciting to me.

But, again, it's the collaboration. I love working with actors. I love giving them, on set, a safe space to do their work. I think that's why I have done well with these stories that are often very emotional. The actors feel like it's a safe space for them to do whatever it is they want to do and they're going to be supported in that. I love all the other aspects of it, too. I've learned so much about production design and costumes and cinematography. That's all very exciting.

While not specifically gay films, both The Artist's Wife and Last Weekend feature prominent queer characters. How important is it to you have that kind of representation in your movies?

It's really important. I love the fact that in Last Weekend and The Artist's Wife, two of the characters are gay and they are important characters, but the plot is not about them being gay. I think we've moved beyond that. Call Me By Your Name was a perfect example of how there's still a lot of ground to explore in the coming out genre. But I love that for gay people, in terms of our visibility on screen, we've moved beyond that. It doesn't always have to be about coming out.

Actually, it's kind of an interesting connection, because in both films it's really about their relationship with their family and navigating that. We don't get into that so much specifically in the film, but in terms of Angela's relationship with Richard, I had written out a whole back story for her, and I think in the early days her being gay was a point of contention for him. Not that he didn't accept her, but just that he was angry at the world and he didn't understand her and so it became this additional element in their relationship that was a source of tension because there was poor communication there. 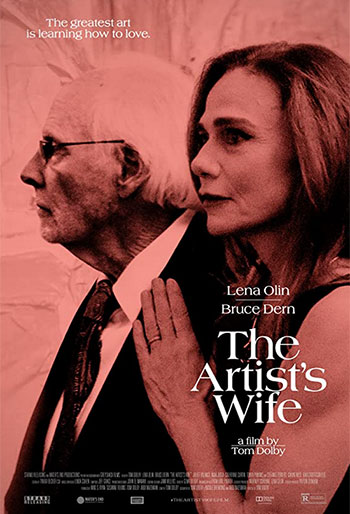 In The Artist's Wife, painter Richard (Bruce Dern) and his second, younger wife Claire (Lena Olin), who is also an artist, come face to face with his Alzheimer's diagnosis. Your father Ray was also diagnosed with Alzheimer's, which to me makes this something of a personal movie. Would you agree?

It's definitely a personal movie. It's not autobiographical, per se. I was able to see how intense and how complicated and emotionally complex the experience was of a family dealing with the patriarch having this disease. I was able to bring some individual experiences into the film, but it was really more the overall emotional landscape for Claire, specifically.

What she was going through and her journey in accepting that. I saw my mother going through that and my brother and I also went through that at the same time, at different rates, in terms of our understanding of that. I wanted to explore what that was like.

Claire, who quit painting as a way to allow Richard to have his career, has this amazing quote: "The problem with being constantly surrounded by bright lights is that they make you feel like there's already enough light in the world." How do you feel about that sentiment?
I absolutely love that line! One of my co-writers wrote that line, so I can't take credit [laughs]. I love that line and I think it speaks to so much of what we feel, as artists and creative people, when you get to know incredible people.

In the best version of things, those people are mentors and they support you. Yet it's difficult, especially in this era of Instagram and Facebook, when people only put the really great parts of their life on social media. When you're starting a project, it's very easy to look and say, "Wow, everybody else is doing fantastically well, and I'm struggling. I must be the only one." I think it's a very relatable sentiment.

The Artist's Wife features mature actresses such as Olin, Tonya Pinkins and Stephanie Powers, while Last Weekend's cast included Patricia Clarkson, Judith Light and Mary Kay Place. Can you please say something about writing for and directing these kinds of performers?

I really love female characters of a certain age. I certainly love all my characters, but I do feel like women in that age group are under-represented on screen. I do like showing different aspects of their life. I find that there's a richness and a depth to their experiences and that it's so relatable. It's so relatable how we see Claire with her perfect refrigerator, instead of attending to her painting career. At least when we first see her at the beginning of the film, it's almost like her art is her picture-perfect refrigerator, ready to be photographed.

Or her espresso machine.

Exactly, the perfect cup of espresso or whatever. I can relate to those feelings where we substitute one thing that is a little more under our control for the other thing that is perhaps riskier and less under our control, but that will actually make us happier. I think women especially have not always been given the opportunity. They have fallen into the same as a character like Claire, where they have not always had the opportunity to fulfill their dreams.

It's interesting, as I think about all of those characters there is a common thread. Even if you go back to Last Weekend. They're all women who are out there doing things. Judith Light's character in Last Weekend, who is very funny, but she's a powerhouse. Patty Clarkson's character is absolutely a powerhouse. Tonya's and Stephanie's (in The Artist's Wife), too. I love that the movies are filled with women doing things. For me, it was almost like this kaleidoscope of the different routes that a woman can take in our world today.

I don't know if this counts as a trend, but in addition to The Artist's Wife, art plays a substantial role in new novels, including Shelter In Place by David Leavitt and Payback by Mary Gordon, as well as in Catherine Gund's documentary Aggie about her mother, art collector and philanthropist Agnes Gund. What do you think that says about the culture at present?

Is that something that you've noticed just in the last year or so?

Just the last couple of months, actually. Suddenly there is visual art in other art.

I think that when we turn on the news, the world itself is a little too scary to contemplate. I feel like we have to transform it as best we can through the production of art or the consumption of art in order to get some perspective on things. That is a fascinating theme.

Finally, have you started working on or thinking about your next film project?

Yes, I have. I'm working on a few different things. One project that I'm doing with my company is an adaptation of a novel called Women in Sunlight by Under the Tuscan Sun author Frances Mayes. It's a novel about three women who are considering moving to an upscale retirement community in the South. Then they decide that instead of doing something like that, that's sort of safe, they're going to go and rent a villa in Tuscany and explore their passions, whether it's art or cooking or what have you. It's exciting because I think it subverts this idea, very much like The Artist's Wife does with Claire and her journey, Women in Sunlight subverts this idea that the third act of life is supposed to be all about slowing down and settling down.

There's a great line that I can share from the script [laughs], where one of the characters says, "People always think you want less complication as you get older. What if I want more complication?" I love that idea. Why can't life expand?