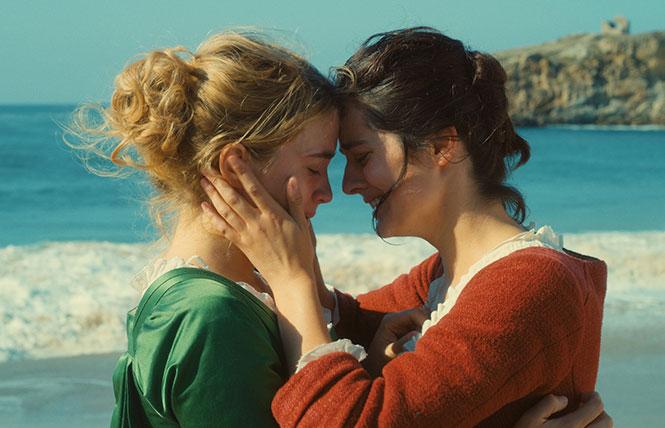 Portrait of a Lady on Fire, just released on Blu-ray DVD by Criterion, is one of the best lesbian films ever made, nominated for nine Cesar Awards, the French Oscar. A sensual dreamy romance about forbidden love and the healing potentiality of art, it also analyzes how desire works.

The story revolves around a five-day affair between two women played out through a series of conversation, walks, and most particularly enduring longing looks they give each other, first secretly, then consensually, and finally mutually with the drama brimming as much in the sizzling dialogue as in the quiet moments. 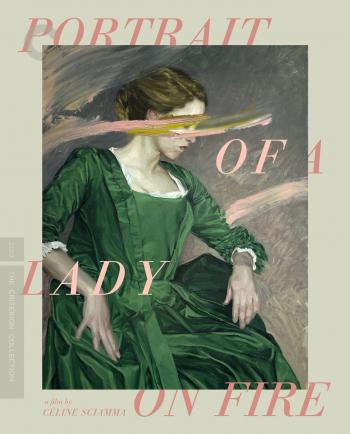 'Portrait of a Lady on Fire' on BluRay

Portrait is a stripped down, contemporary sounding, voluptuous period piece (a la The Favourite), set in 1770 on a remote island off the Brittany coast. The movie begins when one of painter Marianne's (Noemie Merlant) students discovers her picture, "Portrait of a Lady on Fire," and asks about its history.

In a flashback, Marianne, the daughter of a well-known artist (rendering her financially semi-independent so she doesn't need to marry) is commissioned by a French countess (Valeria Golino) to paint a dignified portrait of her daughter Heloise (Adele Haenel), bethrothed to a wealthy Milanese nobleman. This artwork was a traditional way of getting to see a bride before the arranged wedding. Marianne's father accomplished the same for the countess.

Heloise, living happily at a Benedictine convent, was brought home after her sister engaged to the same man, apparently committed suicide. Heloise had declined to sit for a previous portraitist (which meant refusing the marriage). In a duplicitous move, the Countess tells Marianne she will accompany Heloise on her daily walks as a companion, but is to meticulously observe her features and physical details, so she can covertly paint her at night from memory.

Marianne finishes the painting, but having become friendly with the angry and grief-stricken Heloise, confesses the real purpose for her visit. Heloise is critical of the image as not revealing her true self and Marianne destroys it. The Countess leaves for a few days on business, allowing Marianne to paint another picture, as Heloise has agreed to sit for it. Meanwhile, at various times in the house, Marianne sees visions of Heloise in a wedding dress. 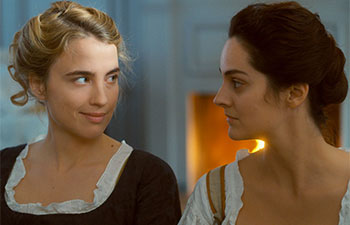 The maid Sophie (Luaa Bajrami), treated as a member of the family, accompanies the two women on their outings, becoming a confidante. Sophie discloses she is expecting an unwanted baby, with Marianne and Heloise arranging to end her pregnancy, later pictorially depicting the abortion.

That night they attend a bonfire gathering with some local women singing (a haunting a capella Latin round translated as "We cannot escape") and dancing. During the festivities, the bottom of Heloise's dress accidentally catches on fire. The next day, Marianne and Heloise kiss for the first time in a cave, then have intimate relations that night.

With the Countess set to return and having completed a second portrait conveying the authentic complex Heloise, Marianne sketches a private illustration of Heloise to remember her and Heloise asks Marianne to draw herself on page 28 of her book. What happens as Marianne prepares to leave and in the years following, especially the two final gripping, heartbreaking scenes, wrap up the film's finale.

In the essential extra on the Blu-ray, a conversation between Sciamma and film critic Dana Stevens, Sciamma describes her movie as a love story with equality through a study of the reciprocal female gaze, suggesting not only palpable mutual sexual tension/attraction but deeper honest emotions so they really see each other through their greedily observable external tiny gestures.

The male gaze by comparison has traditionally conveyed one-sided possession and conquest. Building a sense of sisterhood, there are virtually no men in the movie, but the male presence still dominates because patriarchal society both limits and determines the women's choices underlining their lack of freedom. Heloise must marry to salvage the family's fortunes, but Marianne struggles with the artistic rules and conventions of her time, producing static unmoving pictures.

Painting becomes a character in the film, with silence in conversation used similarly as blank space on a canvas. Heloise becomes a collaborator rather than the object in creating art and in their lovemaking. Sciamma shows how despite repression, LGBTQ people have always devised ways to see and recognize each other, a hiding in plain sight disguised by secrets and lies, despite the risks and consequences, their lives having existed, cultural protestations to the contrary.

The chemistry between Haenel and Merlant is literally combustible, a dress on fire symbolizing unspoken explosive passion where their desires are both acknowledged and returned, highlighted by a stunning use of the "Summer" section of Vivaldi's Four Seasons in the climactic final sequence.

These performances could well be career zeniths for both actresses. Every discreet glance, stare, smile, and touch matters, hypnotically advancing the plot, as do the candid sex scenes, though not as explicit as the lesser French lesbian-themed Blue Is the Warmest Color.
Portrait is never boring throughout its two-hour run time, and while ostensibly an homage to the transformative power of art, this intoxicating visual poetry, aided by Thomas Grezaud's sets, Dorothee Guiraud's costumes, and Claire Mathon's dazzling cinematography, morphs into a timeless aesthetic masterpiece in it own right.